Vancouver, British Columbia--(Newsfile Corp. - May 20, 2020) - Sienna Resources Inc. (TSXV: SIE) (FSE: A1XCQ0) (OTC Pink: SNNAF) (the "Company") is pleased to announce that it has engaged Arctic Drilling AS of Norway as the driller on the planned multihole drill program on Sienna's flagship platinum-palladium and nickel Slättberg project in Sweden.

Jason Gigliotti, President of Sienna, states, "We are very pleased to have Arctic as our drillers. They have a vast knowledge of the area which is a tremendous asset. We are planning on building on our success from the last drill program which intersected some of the highest PGE numbers to date on the property (4.15 g/t) PGE. We are expecting to commence drilling shortly at a time when the junior mining market is showing robust fundamentals. We are very optimistic about what this drill program will uncover at a time when the market is much more receptive to drill results than when we drilled last year."

Sienna conducted a two-hole drill program in October 2019 at its Slättberg project in southern Sweden. That program targeted two electromagnetic ("EM") anomalies detected by downhole surveys performed at the end of the 2018 drill program. One was detected in the vicinity of drill hole SIE-18-006 located at the west end of the trend of historic nickel mines, and one in the vicinity of drill hole SIE-18-003, near the center of the trend of mineralization (see Fig. 1).

Drill hole SIE-19-002 was drilled to test a strong EM response to the west of drill hole SIE-18-003 in the center of the trend of mineralization. Drill hole SIE-19-002 intersected a PGE rich vein 0.55 meters wide (from 88.0 m to 88.55 m), averaging 0.22% Ni, 1.79% Cu, and 4.15 ppm (4.15 g/t) PGE (4.05 g/t Pt vs 0.095 g/t Pd). The unusual enrichment of PGE in this vein is notable and represents one of the highest values ever reported from the property. PGE contents seen in Sienna's 2019 drill holes demonstrate strong PGE potential on the project. Drill hole SIE-19-002 also intersected unmapped mine workings at a depth of 70 meters. This demonstrates that nickel mineralization was mined at a larger scale than was indicated by historic records.

Textures in the sulfide intervals are suggestive of tectonic remobilization of sulfides from a nearby source. Multiple thick mafic dikes were also intercepted in SIE-19-001, which are not seen in surface exposures, nor in the shallow drill holes elsewhere in this area. The abundance of sulfide, higher PGE values, and a swarm of mafic dikes suggest that Sienna is moving closer to a source area for the sulfide mineralization and associated mafic intrusions as it drills to progressively deeper levels in the western target area. 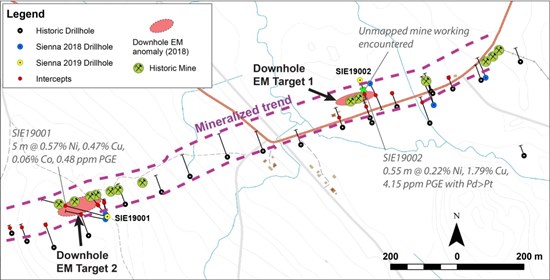 *True thickness estimated to be 55-65% of reported interval

To view the source version of this press release, please visit https://www.newsfilecorp.com/release/56152