"With an existing million-ounce resource base and demonstrated exploration potential across the property, we see numerous opportunities for potential resource growth at Cassiar through extension and exploration," stated CEO and president Tyler Rice. "This optionality will be a key driver in evolving this district-scale project."

Rock samples
A total of 373 rock samples were collected by Margaux geologists from prospects across the Cassiar Gold Property. Samples were taken on traverses and spot-checks of historically documented showings, in a program intended to confirm historical data and to familiarize Margaux geologists with property geology and prospects. The majority of samples taken were from outcrop, but float or subcrop samples were taken locally where outcrop was not available but source was inferred to be proximal. 290 grab samples and 75 chip samples were sent for gold and multielement analysis. Eight rock samples were submitted for lithogeochemical characterization.

Samples were taken from four regions of the Cassiar Gold Property, shown in Figure 1, as well as some regional exploration samples. Gold assays returned encouraging results, including numerous high-grade quartz vein samples, and lower grades from altered and mineralized basalt. Selected high-grade samples from the program, returning greater than 5 g/t Au, are summarized in Table 1. Most are from mineralized quartz veins with pyrite. High-grade gold mineralization in quartz veins is well-known at the Cassiar Gold Property, from showings and through historic underground mining at Table Mountain and at Taurus. Newcoast and Taurus areas have similar character to the Taurus bulk-tonnage resource, with strong iron carbonate and sericite-altered basalt associated mainly with extensional quartz veining. The Lucky showing (Figure 2), 3 km northwest of Taurus, is an alpine ridge characterized by talus and subcrop, 50 m east of the Boomerang-Lyla fault zone, a subvertical dextral-offset regional structure. True outcrop is scarce at Lucky, which is dominated by angular basalt talus of cm- to m-scale, and quartz vein fragments which commonly host specks of visible gold; angular blocks suggest proximal source for mineralized and altered basalt and quartz vein material.

Drill core resampling
The 2019 exploration program included resampling of historical core from drillhole 05BY-01, originally drilled and selectively sampled in 2005 on the Backyard target, within the Newcoast region along Highway 37 (Figure 2). The Backyard prospect is 3 km southeast of the Taurus deposit, 50 m north of Highway 37. Six drillholes were completed in 2005, testing a strike length of 300 m and a width of 40 m.

Drillhole 05BY-01 was selected for resampling due to its similarity in lithology, alteration, and mineralization to the Taurus deposit (see Margaux news release 11 September 2019). Original sampling had gaps through low-alteration intervals, and some gold-bearing samples did not have shoulder samples. Margaux geologists sampled the remaining core from the drillhole from top to bottom, using standard QAQC procedures, to gain a better understanding of gold and trace element distribution in the Backyard system.

Table 2. Selected composite assay values from resampling of drillhole 05BY-01.

In addition to confirming the prospectivity of the Backyard target, and the validity of historical data, the resampling effort illustrates the value of the available core record on the property. Unsampled and half core for many historical deposit and exploration drillholes is available for review and, if warranted, resampling. This core record is a valuable asset, as Margaux continues to develop and assess bulk-tonnage gold prospects on a property that was historically explored for high-grade veins.

2020 Exploration program development
The Margaux exploration team continues its data compilation and verification work as it works to develop high-quality drill targets for the upcoming field season. "Margaux has the benefit of decades of accumulated geological data, across a large contiguous property with a demonstrated production history," stated Kaesy Gladwin, Margaux VP Exploration. "We will leverage this asset to refine deposit models and develop targets that we can use to advance the Cassiar project through diamond drilling in 2020."

Margaux Resources follows a rigorous QA/QC procedure for all drill core samples, including the insertion of analytical blanks and standards at regular intervals. Core size was NQ2. Intervals reported in this news release are core intervals. Additional drilling is required to fully understand the difference between core intercept and true width. Rock grab and chip samples are selective in nature, and may not represent the overall grade or extent of mineralization in an area.

Qualified Person
Kaesy Gladwin, M. Sc., P. Geo., Margaux's Vice President of Exploration, is the Company's Qualified Person as defined by NI 43-101, who has reviewed and approved the technical information contained within this press release.

Forward Looking Statements
This press release may contain forward looking statements including those describing Margaux's future plans and the expectations of management that a stated result or condition will occur. Any statement addressing future events or conditions necessarily involves inherent risk and uncertainty. Actual results can differ materially from those anticipated by management at the time of writing due to many factors, the majority of which are beyond the control of Margaux and its management. In particular, this news release contains forward-looking statements pertaining, directly or indirectly, to the following: Margaux's exploration plans and work commitments, and economic factors, business and operations strategies. Although Margaux believes that the expectations reflected in these forward-looking statements are reasonably, undue reliance should not be placed on them because Margaux can give no assurance that they will prove to be correct. Readers are cautioned that the foregoing list of risk factors should not be construed as exhaustive. These statements speak only as of the date of this release or as of the date specified in the documents referenced by this release, as the case may be. The Company undertakes no obligation to publicly update or revise any forward-looking statements except as expressly required by applicable securities laws. 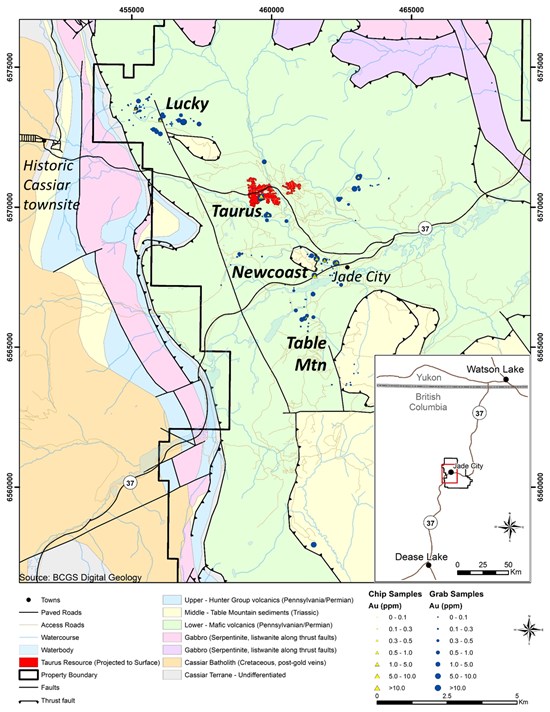 Figure 1. Distribution and gold grade ranges of rock samples taken during the 2019 exploration program. In total, 373 samples were collected. 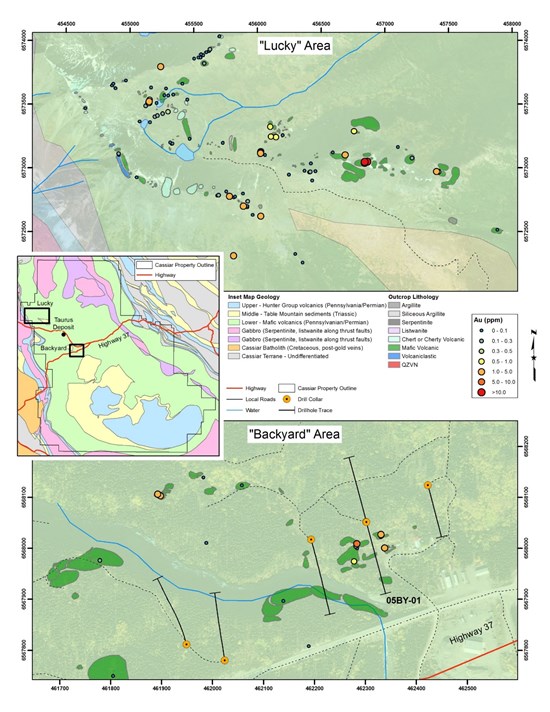 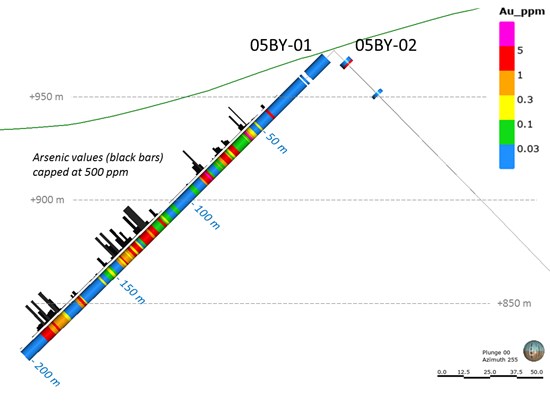 Figure 3. Vertical section looking west through drillhole 05BY-01 and 05BY-02, showing gold assay and arsenic profile from 2019 resampling.

NOT FOR DISSEMINATION IN THE UNITED STATES

To view the source version of this press release, please visit https://www.newsfilecorp.com/release/52024

Sign up to receive news releases by email for Margaux Resources Ltd. or all companies belonging to the Mining/Metals, Precious Metals industries.