Vancouver, British Columbia--(Newsfile Corp. - January 30, 2020) - Spearmint Resources Inc. (CSE: SPMT) (OTC Pink: SPMTF) (FSE: A2AHL5) (the "Company") is pleased to announce the company is planning to start up operations on its Clayton Valley Lithium Prospect in Nevada. Plans are now being formulated by management. Spearmint has two separate claim blocks in Nevada that are prospective for lithium known as the Elon property and the McGee property which cover an aggregate area of 800 acres.

James Nelson, President of Spearmint, stated, "There is a distinct positive feeling surrounding lithium and especially lithium in Nevada recently. On January 29, 2020 Noram Ventures Inc. announced successful drill results including 56.4 metres with an average of 1,230 parts per million lithium on their project that borders Spearmint. Spearmint intersected a range of 1670-396 ppm Li over 270 feet averaging 835 ppm Li, including 35 feet averaging 1,140 ppm Li. Also recently announced was news that Schlumberger Technology Corporation has begun the initial steps to advance its option to test and develop Pure Energy Mineral's Clayton Valley Project (announced November 26, 2019). When a major company like Schlumberger is looking at the property right beside Spearmint, and judging by how Noram shares doubled yesterday on their lithium drill results, it is clear that lithium in Nevada is gaining attention again. We are looking forward to getting back into Nevada shortly. We also just announced the acquisition of the River Valley East Platinum-Palladium Prospect in Ontario that we are also formulating plans on. Clearly 2020 will be very active for Spearmint in terms of work programs at a time when the general sentiment towards junior mining companies has turned positive." 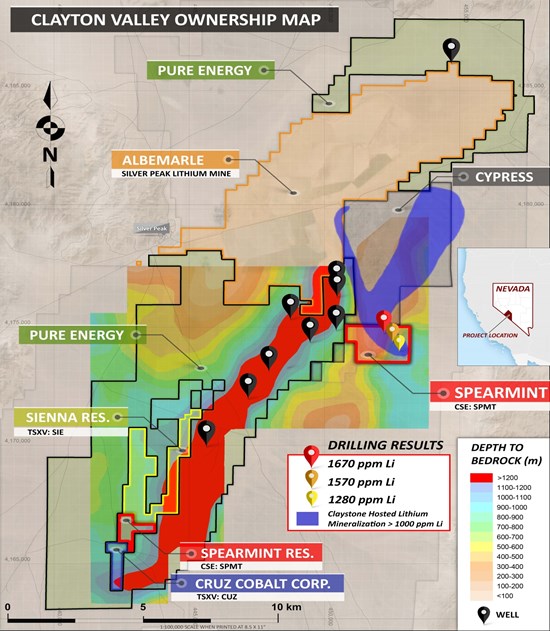 The technical contents of this release were approved by Greg Thomson, PGeo, a qualified person as defined by National Instrument 43-101. Management cautions that past results or discoveries on properties in proximity to Spearmint may not necessarily be indicative to the presence of mineralization on the Company's properties.

If you would like to be added to Spearmint's news distribution list, please send your email address to
info@spearmintresources.ca

To view the source version of this press release, please visit https://www.newsfilecorp.com/release/51951