A total of 78 rock samples were collected within the Vixen North property from six locations that were chosen following ALX's review of historical exploration data. Crews were transported daily by helicopter to the sites where historical trenches and reported mineral occurrences were located. Both mineralized and unmineralized samples were collected to obtain geochemical signatures at each of the target areas. Four rock samples returned significant values of gold with anomalous silver, including a sample comprised of 80% quartz veins/flooding with 20% host metabasalt that returned 23.9 grams/tonne (0.765 oz/ton) gold. Rock samples that returned assay values of over 1.0 grams/tonne gold are shown in the table below. The brief five-day program successfully confirmed many of the historical gold prospects at Vixen North, and additional work is recommended. 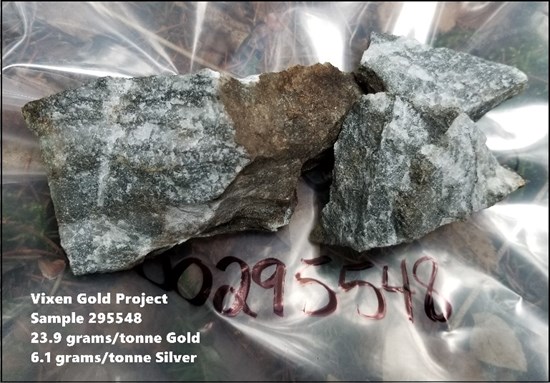 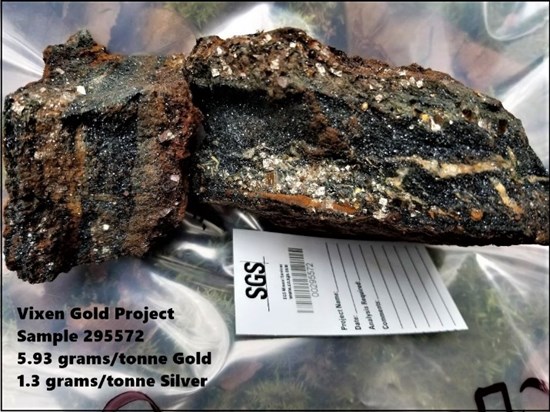 A total of 149 soil samples were collected for processing by the Spatiotemporal Geochemical Hydrocarbon ("SGH") method, which has reportedly detected gold and other minerals in overburden covered areas. The results from the SGH survey are pending and will be released after their receipt, compilation and interpretation.

Click here to view maps and photos of the Vixen Gold Project.

ALX has initiated a geophysical study from historical digital airborne data, accessed through Condor Consulting, Inc. of Lakewood, Colorado ("Condor Consulting"). Condor Consulting are recognized experts in the field of airborne electromagnetics and have been retained by ALX to perform an interpretation of historical airborne data collected in the 1990s, before modern computer modeling techniques were available to explorers. ALX intends to integrate the geochemical results of its October 2019 site visit with all available geological and geophysical data in order to prioritize target areas that demonstrate faulting and possible geological contacts that are interpreted to act as conduits for hydrothermal fluids for precious metals.

About Vixen and the Red Lake Mining District

To date, the Red Lake Mining District ("Red Lake") has produced over 28 million ounces of gold since mines began production in 1925 (readers are cautioned that mineralization present on adjacent properties may not be present at Vixen). Historic gold mines in the Red Lake camp include the Campbell mine, the Red Lake mine, and the Couchenour-Williams mine, all multi-million ounce gold producers. Vixen lies within the Birch-Uchi greenstone belt, a geological trend located to the northeast of Red Lake that hosts numerous historical gold mines and showings and is highly-prospective for new showings of gold mineralization. ALX considers Vixen underexplored where areas of limited outcrop inhibited surface exploration and plans to identify new drill targets through its geophysical review and leading-edge geochemical exploration techniques.

Vixen consists of 499 mineral claims totaling 10,069 hectares (24,880 acres) located within the Birch-Uchi greenstone belt. The Vixen claims were staked by a company owned by Jody Dahrouge, a related party to ALX (the "Vendor") and were acquired by the Company in exchange for reimbursement of the Vendor's staking costs, and implementation of an exclusive three-year geological services agreement between ALX and the Vendor. A 2.0% NSR was granted in favour of the Vendor by ALX, 1.0% of which can be purchased by the Company for $1.5 million.

The technical information in this news release was reviewed and approved by Neil McCallum, P. Geo., a consultant to the Company, who is a Qualified Person in accordance with the Canadian regulatory requirements set out in National Instrument 43-101. Readers are cautioned that some of the technical information described in this news release is historical in nature; however, the information is deemed credible and was produced by professional geologists of the eras discussed. ALX further cautions investors that it has reviewed but has not verified all of the historical Vixen exploration data.

Rock samples described in this news release were shipped to Activation Laboratories Ltd. (Actlabs) in Ancaster, Ontario for analysis. Gold was analyzed by fire assay with Inductively Coupled Plasma Optical Emission Spectroscopy (ICP-OES). Silver was analyzed using a 4-acid "Near Total" Digestion with an ICP-OES finish.

ALX's mandate is to provide shareholders with multiple opportunities for discovery by exploring a portfolio of prospective mineral properties in northern Saskatchewan, Canada, a superior mining jurisdiction. The Company executes well-designed exploration programs using the latest technologies and has interests in over 200,000 hectares in Saskatchewan, a Province which hosts the richest uranium deposits in the world, a producing gold mine, and demonstrates potential for economic base metals deposits. ALX has recently acquired the Falcon and Flying Vee Nickel projects in northern Saskatchewan, the Vixen Gold Project in the historic Red Lake Mining District of Ontario, Canada, and the Draco VMS Project in Norway. ALX is based in Vancouver, BC, Canada and its common shares are listed on the TSX Venture Exchange under the symbol "AL", on the Frankfurt Stock Exchange under the symbol "6LLN" and in the United States OTC market under the symbol "ALXEF". Technical reports are available on SEDAR at www.sedar.com for several of the Company's active properties.

For more information about the Company, please visit the ALX corporate website at www.alxuranium.com or contact Roger Leschuk, Manager, Corporate Communications at PH: 604.629.0293 or Toll-Free: 866.629.8368, or by email: rleschuk@alxuranium.com

On Behalf of the Board of Directors of ALX Uranium Corp.

Statements in this document which are not purely historical are forward-looking statements, including any statements regarding beliefs, plans, expectations or intentions regarding the future. Forward-looking statements in this news release include the Vixen Gold Project ("Vixen") is prospective for gold, the Company's plans to undertake exploration activities at the Vixen and expend funds on Vixen. It is important to note that the Company's actual business outcomes and exploration results could differ materially from those in such forward-looking statements. Risks and uncertainties include that ALX may not be able to fully finance exploration at Vixen, including drilling; our initial findings at Vixen may prove to be unworthy of further expenditure; commodity prices may not support exploration expenditures at Vixen; and economic, competitive, governmental, environmental and technological factors may affect the Company's operations, markets, products and share price. Even if we explore and develop Vixen, and even if gold or other metals or minerals are discovered in quantity, the project may not be commercially viable. Additional risk factors are discussed in the Company's Management Discussion and Analysis for the Nine Months Ended September 30, 2019, which is available under Company's SEDAR profile at www.sedar.com. Except as required by law, we will not update these forward-looking statement risk factors.

To view the source version of this press release, please visit https://www.newsfilecorp.com/release/50727

Sign up to receive news releases by email for ALX Resources Corp. or all companies belonging to the Mining/Metals, Energy Metals industries.