As part of the Riyadh Season, the Kingdom of Saudi Arabia will host 'The Nexus,' Riot Games' first official League of Legends event in the Middle East happening December 5th through the 7th.

Dubai, United Arab Emirates--(Newsfile Corp. - December 2, 2019) - Riot Games, the studio behind the worldwide phenomenon League of Legends, today announces the launch of 'The Nexus,' their first official event in the Middle East and North Africa (MENA) region. The event, running from 5-7 December, will be a part of the Riyadh Season, an initiative by the Saudi General Entertainment Authority (GEA) to transform Saudi Arabia into a globally recognized tourist and entertainment destination. 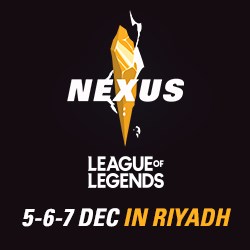 "We opened our offices in the region over a year ago. Since then, we have been working on ways to deliver local experiences to our communities and players across the MENA region. The Nexus is our first step in solidifying our presence in the region to support and celebrate our players," says Onur Tamer, METAI General Manager at Riot Games. "The launch of the Nexus festival is just one part of our plan to increase our presence in the MENA region. We are also looking at rolling out Arabic language support for all our products starting next year along with a localized version of League of Legends for all our players."

The Nexus aims to provide an immersive, one-of-a-kind experience based around the iconic League of Legends universe Runeterra, including experiential zones, tournaments and live concerts. The event is expected to attract a total audience of 30,000. 23 different activities, mini-games and events enable players to mingle and interact with their favorite champions, creating a fun family experience for participants of all ages.

The five versus five Summoner's Rift, the festival's main event, offers prize money of $850,000 USD. The 'influencer tournament' will team up eight of the top influencers in the region with micro-influencers to battle it out for a piece of the $750,000 USD prize pool. The winners of the one-on-one, Teamfight Tactics and Cosplay competitions will share the remaining $400,000 USD.

The competition began in November with qualifier rounds spread across 13 countries in the MENA region. This regional qualifier saw 750 teams register with over 3,500 players. The top eight teams that emerged from the qualifying rounds will be proceeding to compete in the main event in Riyadh. The qualifiers were broadcasted live on League of Legends Arabia's Twitch channel.

Keeping in line with League of Legends' penchant for creating musical experiences over the last decade, The Nexus festival will also feature spectacular shows and an immersive visual experience that only Riot Games can provide with established international artists including DJ Mako, Crystal Method and Jason Derulo, scheduled for the 6th and 7th of December.

Registrations are now open and ticket sales for the event are available on www.nexusarabia.leagueoflegends.com.

Riot Games was founded in 2006 to develop, publish, and support the most player-focused games in the world. In 2009, Riot released its debut title, League of Legends, to worldwide acclaim. League has gone on to be the most-played PC game in the world and a key driver of the explosive growth of esports.

As League enters its second decade, Riot continues to evolve the game while delivering new experiences to players with Legends of Runeterra and multiple work-in-progress titles, while exploring the world of Runeterra through multimedia projects across music, comic books, and more.

Founded by Brandon Beck and Marc Merrill, Riot is headquartered in Los Angeles, California, and has 2,500+ Rioters in 20+ offices worldwide.

nexus-arabia.png
Nexus Arabia
The Nexus is an immersive themed festival revolving around the iconic League of Legends game which includes experiential zones, tournaments, and concerts.

To view the source version of this press release, please visit https://www.newsfilecorp.com/release/50268

Sign up to receive news releases by email for Riot Games or all companies belonging to the Gaming/Lottery, Entertainment industries.