Vancouver, British Columbia--(Newsfile Corp. - November 20, 2019) - (TSXV: ORS) (the "Company") announces that assays have been received from the Company's 2019 drilling program at the Captain gold - copper project in north central B.C. A total of 1900 metres of drilling in 7 holes was completed in the Admiral Target and target T2, one of 9 large strong magnetic anomalies outlined at the Captain project.

Targets T1 - T9
There are 9 large strong magnetic anomalies outlined at Captain flanking a central large magnetic diorite intrusive and only two have been drill tested to date (see website for maps). The magnetic highs strike northwesterly and vary in width from 200 - 1000 m with strike lengths of 500 - 3000 m and are potentially related to mineralized monzonite porphyries. These magnetic anomalies are associated with moderate IP chargeability anomalies from 10-15mV/v.

Orestone will be permitting 27 additional drill holes to test these targets. 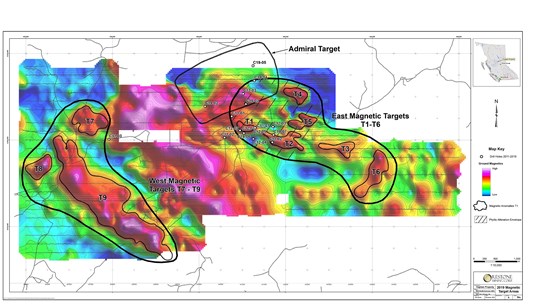 The Admiral Target
Drilling in the Admiral Target was unsuccessful at locating the source of the mineralized zenolith (IP high target) within the post mineral dyke (PMD) intersected in hole C13-03. Drill holes C19-02 and C19-05 intersected chlorite altered volcanics on the north and west side of the PMD and holes C19-03, C19-04 and C19-06 on the northern and southern margin of the PMD intersected sericite altered monzonite with fine disseminated pyrite. Hole 19-03 immediately south of the PMD did intersect a sericite altered monzonite sill and andesite from 265.6 m to 295 m (30 metres) grading 0.24 g/t Au and 818 ppm copper, which remains open to depth.

"We are encouraged by the long interval of gold and copper mineralization in hole C19-07 and although it is lower in grade, we see similarities to hole C12-05 mineralized from the bedrock contact at 63 metres to the bottom of the hole at 550 metres. Drilling continues to demonstrate the gold enriched nature of this large porphyry system and we have learned a great deal about how to follow it. There are an additional seven targets to test with the largest being T9 measuring 1x3 km", stated David Hottman, Orestone's CEO.

Additional information will be released as it becomes available.

If you would like to stay informed of the latest corporate activities please click here to provide consent and receive news, updates and important information as we move our projects forward.

Gary Nordin PGeo, BC, a director of the Company has reviewed the technical information contained in this news release and has visited the project.

Orestone Mining Corp. is a Canadian based company that owns a 100% percent interest in the Captain gold - copper project located approximately 30 kilometres south of the Mt. Milligan Mine in British Columbia and has an option to purchase a 100% interest in the Resguardo copper project in Region III Chile. For more information please visit: www.orestone.ca

ON BEHALF OF ORESTONE MINING CORP.

Neither the TSX Venture Exchange nor its Regulation Services Provider (as that term is defined in the policies of the TSX Venture Exchange) accepts responsibility for the adequacy or accuracy of this News Release. This news release has been prepared by management and no regulatory authority has approved or disapproved the information contained herein.

To view the source version of this press release, please visit https://www.newsfilecorp.com/release/49903

Sign up to receive news releases by email for Orestone Mining Corp. or all companies belonging to the Mining/Metals industry.