In addition to the recently reported diamond drill program results (see News Release - November 05, 2019), Appia completed prospecting which led to the discovery of eight new surface outcrop zones* and showings* with characteristics of the rare earth element mineralization system (the "System") including visible monazite. The new discoveries have expanded known surface REE mineralization within an area measuring over 500 m by 500 m, and the Biotite Lake discovery has extended the 500 m footprint to over 1.8 km (Figure 1).

True thickness has not been determined for each of the intervals mentioned, including those in Table 1.

Mr. James Sykes, Appia's Vice-President, Exploration and Development, comments: "The discovery of these new zones demonstrates that the System is extensive beneath the overburden. The Biotite Lake discovery shows that the REE mineralization system within the Alces Lake area is far more wide-spread than previously thought. These discoveries have provided us with new target areas for upcoming exploration, and the geological controls of these zones will help with our overall understanding of the System. We continue to discover more surface mineralization beneath the overburden with each work program. These "blind" discoveries highlight the surface and near-surface potential for additional high-grade REE zones, increasing the economic potential of the Alces Lake REE system. In many areas, we have observed low-grade TREO halos surrounding high-grade TREO bodies, therefore the discoveries at the Quartzite and Thomas zones could potentially lead us to nearby near-surface high-grade REE bodies. Our surface prospecting along the radiometric highs (pink in Figure 1) show a positive correlation with known surface discoveries, thus a large number of surface radiometric targets still require follow-up. We are excited for next year's prospecting with the confidence that we will discover (and uncover) many more high-grade TREO surface zones."

In the coming weeks, the Company will be initiating academic studies with universities in Europe and North America to help better understand the origin(s) and source of the System (see News Release - November 5, 2019, for details).

The Alces Lake Property encompasses some of the highest-grade total and critical REE mineralization in the world, hosted within numerous surface and near-surface showings to which the depth extent remains unknown. Critical REEs are defined here as those that are in short-supply and high-demand for use in permanent magnets and modern electronic applications (i.e.: Neodymium (Nd), Praseodymium (Pr) and Dysprosium (Dy)). The project area is 14,334 hectares (35,420 acres) in size and is 100% owned by Appia.

All channel samples ("CS", refer to Table 1) were removed from outcrops using a cut-off saw, and hammer and chisel. The samples were cut one inch thick and deep in individual segments ranging from 0.38 m to 1.03 m along the reported distance. The sample distances and mineralization continuity were limited to visible and accessible outcrop exposures ie: all sampled outcrops either i) disappeared under thick vegetation cover, ii) dipped below the overburden, or iii) the terrain proved to be too difficult to continue sampling. Grab samples were individual fist-sized samples removed from outcrops using a hammer and chisel.

All assay results were provided by Saskatchewan Research Council's ("SRC") Geoanalytical Laboratory, an ISO/IEC 17025:2005 (CAN-P-4E) certified laboratory in Saskatoon, SK, for multi-element and REE analysis. The REE analysis uses a lithium metaborate fusion to dissolve refractory minerals, such as monazite

All analytical results reported herein have passed rigorous internal QA/QC review and compilation. The technical content in this news release was reviewed and approved by Dr. Irvine R. Annesley, P.Geo, Advisor to Appia's Board of Directors, and a Qualified Person as defined by National Instrument 43-101. 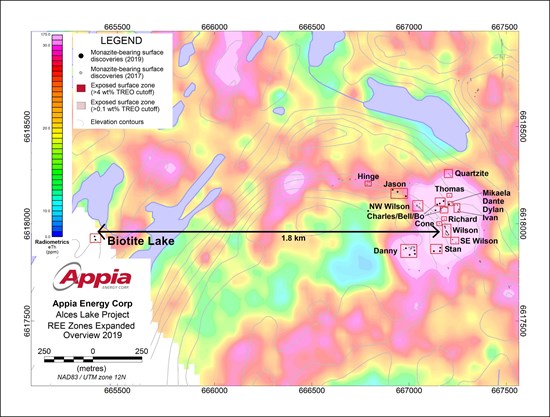 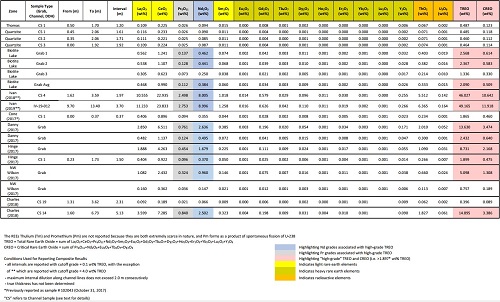 To view an enhanced version of this graphic, please visit:
https://orders.newsfilecorp.com/files/5416/49882_table.jpg

To view the source version of this press release, please visit https://www.newsfilecorp.com/release/49882