Sudbury, Ontario--(Newsfile Corp. - November 14, 2019) - Transition Metals Corp (TSXV: XTM) ("Transition", "the Company") is pleased to announce that it has acquired a 100% interest in the Fostung Property located near the town of Espanola approximately 70 kilometres southwest of Sudbury, Ontario. The property hosts an historic tungsten trioxide (WO3) skarn resource that in 2007 was stated to contain an Inferred Mineral Resource of 12.4 million tonnes (Mt) grading 0.213 wt. % WO31.

The resource estimate completed on the Fostung Property that is mentioned in this release was completed at the request of Golden Predator Mine Inc. in 2007 by SRK Consulting Inc1. The report states a CIM classified Inferred Mineral Resource of 12.4 Mt of mineral material with 0.213 wt.% WO3 using a 0.125 wt.% cut-off based on information from 44 drillholes totaling 9,185 metres completed from 1966 to 1986.

Recent grab samples collected by the Company returned values of up to 0.63 wt. % WO3, 0.87 wt. % Cu, 0.12 wt. % Zn and 15.9 ppm Ag and demonstrate the polymetallic nature of the mineralization on the Fostung Property.

CEO Scott McLean commented, "Tungsten has been recognized as a critical metal by various countries including the USA. With limited to no tungsten production in North America and the vast majority of global production coming from China, the Fostung Asset is viewed as being a strategic acquisition. We are also encouraged by the polymetallic nature of mineralization and the numerous exploration targets that have been identified from our data review on a property that has seen essentially no exploration for more than 30 years."

In June 2019, Transition acquired a 100% interest in approximately 690 hectares of crownland via staking that covered a portion of the former Fostung leases. Two additional groups of claims (the CJP Exploration claims and the Daxl claims), representing the remaining Fostung leases, were acquired via purchase agreements (see Figure 1).

Transition has purchased a 100% interest in the property by issuing $5,000 in cash to the Vendor.

As part of Transition's due diligence on the Fostung Property a field examination was completed and a series of grab samples were collected across the property in order to verify historical assay results. Assay results are listed below in Table 1.

The Fostung property now consists of 50 mining claims covering 1,114 hectares. The property is located in Foster Township, District of Sudbury, in Ontario, Canada approximately 8 kilometres southeast of Espanola, Ontario. An excellent all-weather gravel road extends from the property to Espanola where TransCanada Highway #17 is located. The prolific Sudbury mining district is located 70 kilometres to the northeast.

The Fostung Property was initially discovered in 1966 by local prospectors who subsequently optioned the property to Texas Gulf. From 1966 to 1973 a total of 14 holes for 2,969 metres were completed by a succession of companies including Texas Gulf, Cerro Corp, Vangulf and St. Joseph Explorations. The property remained idle until 1978 when Union Carbide optioned the property and proceeded to drill a further 29 holes totaling 5,234 metres over an eight-year period. Union Carbide also performed a preliminary resource estimate, economic cost analysis for both open pit and underground mining scenarios; preliminary bulk metallurgical test on composited core rejects and developed a preliminary mill design. In 1986, Novamin Resources took over the property and completed 1 hole for 982 metres which remains the last exploration hole drilled on the property. In 1988, Breakwater Resources acquired the assets of Novamin and 30-year mining leases were secured for the property. The property remained idle until 2007 when Golden Predator optioned the property from Breakwater Resources and commissioned SRK Consulting to complete a National Instrument 43-101 Technical Report on Resources on the Fostung Property. In 2009, Golden Predator transferred ownership of the Fostung Project to its newly created spin-out company called EMC Metals Corp. In 2011, EMC Metals Corp. sold a 100% interest in the project to Janus Resources Inc. for $500,000 in cash. The property remained covered under the initial 30-year leases until 2019 when the leases were allowed to lapse and subsequent opened for staking by the Ministry of Northern Development and Mines.

The Fostung mineralization is a skarn-type, tungsten deposit located within calcareous Huronian metasedimentary units unconformably overlying Precambrian basement shield rocks. The property is situated within a northeast trending belt of Early Precambrian volcanic and felsic plutonic rocks that separates the Superior Archean greenstone-gneiss Province on the northwest from the Mesoproterozoic to Neoproterozoic metasediments and felsic plutons of the Grenville Province on the southeast1.

Scheelite mineralization extends along strike of the Calcareous Siltstone Member of the Espanola Formation for approximately 2 kilometres. Thinner and more discontinuous skarns with less volumetrically significant scheelite occurs in the stratigraphically higher and lower units. The primary controls on mineralization are the proximity of chemically favourable carbonate-bearing strata to structural permeability zones of faults and fracture zones. Conceptually the faults have provided the channel pathways for hydrothermal fluids derived from an unknown, presumably deep buried felsic pluton which is uncommon in the local area1.

Zones of tungsten mineralization are associated with packages of dark red garnet ± pyroxene beds intercalated with diopside rich beds. Historic grades of approximately 1 wt. % WO3 over 1 metre have been intersected in the former, but more commonly average 0.15 wt. % to 0.30 wt. % WO3 in the latter assemblages. In the dark green skarns containing 50 percent pyrrhotite, scheelite mineralization historic grades of up to 2.75 wt. % WO3 over 1.5 metres have been discovered. High-grade scheelite zones are commonly flanked by lower grade scheelite-pyrrhotite-chalcopyrite ± pyrite and sphalerite. Scheelite tends to be somewhat mobile, locally redistributed in Nipissing and olivine diabase dikes that have intruded the mineralized section1.

Transition plans to compile and integrate all of the historic data into a 3D geological model. This will be followed by an investigation into the local distribution of base and precious metals to identify potential pathfinder elements to help better constrain the extent of the hydrothermal system driving the skarn mineralization as well as to assess whether other polymetallic opportunities exist/can be targeted.

The technical elements of this press release have been reviewed and approved by Transition's Exploration Manager, Mr. Grant Mourre, P.Geo. (PGO), a Qualified Person under National Instrument 43-101. 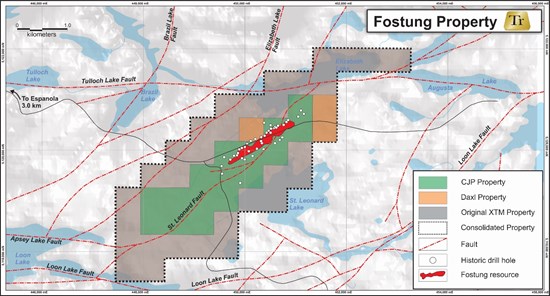 To view the source version of this press release, please visit https://www.newsfilecorp.com/release/49753