Template For Growth - "Build It and They Will Come"

With the release and uptake of multiple ePlay owned mobile games, the company will now monetize those games with advertising, in-app purchases, and eSports Prizing. The company owns its technology and leverages that intellectual property as a template for expansion of monetization, revenue, partnerships, acquisitions, and game titles. The company will monetize its engaged audiences and use its partnerships and intellectual property toward exponential growth in the highest margin segment of the esports market. 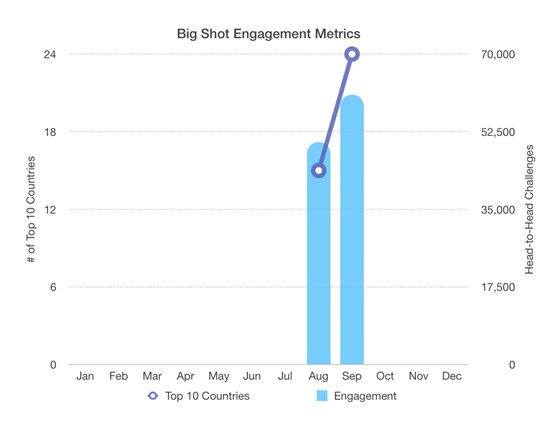 "ePlay is thrilled with the off-season user engagement data and brand new revenue sources for the company," says Trevor Doerksen, CEO of ePlay. "Earlier this month, was the first time ePlay games were partially enabled for revenue, and the company is excited with these pre-NBA season results."

Currently, ePlay mobile games are primarily using virtual currency for esports Prizing, and therefore are under-monetized. The company has previously stated that Big Shot is expected to generate an average esports, and in-app purchase revenue per daily active user (ARPDAU) of USD$1.46. As previously announced, conversion to cash prizing is in progress. ePlay is well along the way to the first two steps in earning revenue in the USD$61.3B mobile gaming industry.

Today, ePlay is able to continue to reveal actual user data in which to monetize and focus core growth:

The company released its latest iPhone and Android versions of Big Shot Basketball on September 23, 2019 for Apple App Store and Google Play Store. Compatibility with iOS 13 released by Apple days prior and new features include:

To view the source version of this press release, please visit https://www.newsfilecorp.com/release/48395