The bedrock occurrence consists of a 4.5 m wide attenuated and strongly altered zone of felsic volcanics containing numerous clasts (10-20 cm in size) of base metal rich massive sulphides within a similar geological and structural setting to that which hosts the historic Mary March discovery hole (MM-294-7) drilled in 1999. Highlights from the massive sulphide grab samples include:

Note that grab samples are selective by nature and values reported are not representative of mineralized zones.

"This new discovery on trend from the historic Mary March discovery hole MM-294-7 validates our belief that the Buchans-Mary March project has the potential to host undiscovered massive sulphide deposits similar to those that supported historic mining operations at Buchans. The Company has a significant land package that has received little sustained exploration in over twenty years, and this discovery demonstrates the exploration potential of the project. Canstar intends to follow up this discovery with additional ground-based geochemical and geophysical surveys, including additional prospecting to further refine targets for drilling," stated Christos Doulis, CEO of Canstar.

Canstar's summer 2019 field program at Buchans-Mary March consisted of regional lithogeochemical analysis, mapping and prospecting, core review and a re-examination and digital compilation of existing data during May and June, followed by trenching programs at Seal Pond and Mary March during July and August. The compilation work and summer field program refined and prioritized targets generated from the 2017 Skytem airborne survey and resulted in a new base metal-rich discovery, confirming the exploration potential of the underexplored Buchans belt. Figure 1 outlines Canstar's land holdings in the Buchans camp, which covers approximately 39,000 hectares, and provides a snapshot of the Company's recent exploration focus. 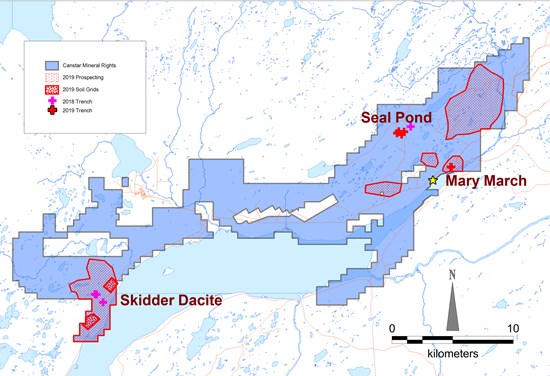 This area was selected as it hosts one of the numerous strong EM anomalies detected in the 2017 Skytem regional airborne survey. In addition, historic soil geochemical surveys undertaken by BP Resources in the mid 1980's show this area to be anomalous in base metals. Trenching by BP Resources in 1991 uncovered a high-grade boulder assaying 2.9% Cu, 9.2% Zn and 23.7% Pb (historic unverified assays) 80 m from this season's trench. Follow up prospecting of this high-grade boulder and the base metal soil anomaly led to the discovery of angular copper bearing pyritic massive sulphide boulders proximal to the Skytem anomaly. The two samples returned assays of 3.2% Cu and 4.8% Cu.

The textures seen in trench MM-TR-01 may result from the deformation of a debris flow containing clasts of massive sulphide. Such debris flow deposits are known in many VMS enviornments and are characteristic of some of the Buchans deposits. The deformation is a product of the southeasterly directed thrusting which is well documented in this region of the Buchans Camp. The massive sulphide grab samples from the trench are copper and precious metal enriched, with negligible lead and zinc. These grades are similar to some samples within the original Mary March Discovery drill intercept (1.8 km to the southwest) where a 1.6 m section of core assayed 2.5 gpt Au, 239 gpt Ag and 2.7% Cu with negligible lead and zinc (historic unverified assays). The only nearby historic drill hole was drilled 80 m to the southwest and intercepted 37 m of altered felsic volcanic rock, potentially the footwall to mineralization.

At Skidder Dacite, located in the western portion of Canstar's Buchans-Mary March project, a trenching program carried out in the fall of 2018 was followed up by prospecting and soil sampling of six historical geophysical anomalies during the summer of 2019. This program failed to locate signs of significant base metal related mineralization coincident with the geophysical anomalies. Samples from the Skidder Dacite area did yield anomalous gold, with the highest assaying 3.7 gpt Au.

On behalf of the Board,

Bob Patey, B.Sc. / P. Geo, Vice President Exploration and a Qualified Person as defined by National Instrument 43-101 - Standards of Disclosure for Mineral Projects, is responsible for the scientific and technical data presented herein and has reviewed and approved this release.

Canstar Resources is a Canadian mineral exploration and development company, with the objective to discover and develop economic mineral deposits in North America. Currently, Canstar's focus is to advance its flagship Mary March project and other mineral exploration properties in Newfoundland and Labrador. Canstar is based in Toronto, Canada and is listed on the TSX Venture Exchange and trades under the symbol ROX-V, and on the OTCQB Exchange under the symbol CSRNF.

Neither TSX Venture Exchange nor its Regulation Services Provider (as that term is defined in the policies of the TSX Venture Exchange) accepts responsibility for the adequacy or accuracy of this release. This News Release includes certain "forward-looking statements" which are not comprised of historical facts. Forward-looking statements include estimates and statements that describe the Company's future plans, objectives or goals, including words to the effect that the Company or management expects a stated condition or result to occur. Forward-looking statements may be identified by such terms as "believes", "anticipates", "expects", "estimates", "may", "could", "would", "will", or "plan". Since forward-looking statements are based on assumptions and address future events and conditions, by their very nature they involve inherent risks and uncertainties. Although these statements are based on information currently available to the Company, the Company provides no assurance that actual results will meet management's expectations. Risks, uncertainties and other factors involved with forward-looking information could cause actual events, results, performance, prospects and opportunities to differ materially from those expressed or implied by such forward-looking information. Forward looking information in this news release includes, but is not limited to, the Company's objectives, goals or future plans, statements, exploration results, potential mineralization, the estimation of mineral resources, exploration and mine development plans, timing of the commencement of operations and estimates of market conditions. Factors that could cause actual results to differ materially from such forward-looking information include, but are not limited to failure to identify mineral resources, failure to convert estimated mineral resources to reserves, the inability to complete a feasibility study which recommends a production decision, the preliminary nature of metallurgical test results, delays in obtaining or failures to obtain required governmental, environmental or other project approvals, political risks, inability to fulfill the duty to accommodate First Nations and other indigenous peoples, uncertainties relating to the availability and costs of financing needed in the future, changes in equity markets, inflation, changes in exchange rates, fluctuations in commodity prices, delays in the development of projects, capital and operating costs varying significantly from estimates and the other risks involved in the mineral exploration and development industry, and those risks set out in the Company's public documents filed on SEDAR. Although the Company believes that the assumptions and factors used in preparing the forward-looking information in this news release are reasonable, undue reliance should not be placed on such information, which only applies as of the date of this news release, and no assurance can be given that such events will occur in the disclosed time frames or at all. The Company disclaims any intention or obligation to update or revise any forward-looking information, whether as a result of new information, future events or otherwise, other than as required by law.

To view the source version of this press release, please visit https://www.newsfilecorp.com/release/47632

Sign up to receive news releases by email for Canstar Resources Inc. or all companies belonging to the Mining and Metals industry.