From 2014 through 2017, partner-funded exploration resulted in a total of 14 diamond drill holes and four Induced Polarization ("IP") surveys on the property. At the Elbow Zone, five of the six diamond drill holes were sent for laboratory analysis and all five of these holes returned anomalous gold, highlighted by 94 metres grading 0.34 g/t gold in DD15ELB001. At the Sooner Zone, where diamond drilling in 2015 encountered broad intervals of anomalous copper, no further drilling was completed. Both of these areas have been prioritized for follow up RC drilling in 2019.

PEMC acquired the Pinnacle Reef property through staking in 2012. Since 2014, the property has seen over $2,000,000 in partner-funded exploration. During 2014, a total of 44 line-km of IP surveys were completed over three target areas on the Pinnacle Reef property, by previous partner Oz Exploration Pty Ltd. ("OZE"). This program identified three areas of anomalous chargeability, two of which (Elbow and Sooner) were prioritized for follow up diamond drill testing in 2015, one (Later) remains untested. In 2015, the Elbow and Sooner target areas were tested with diamond drilling by OZE with six holes totaling 2,493 m. Additional drilling was completed during 2016 by ML Gold at the Elbow Zone with three diamond drill holes totaling 1,107 m. Similar to the 2015 drill results, anomalous gold intercepts were associated with localized phyllic alteration at the Elbow Zone.

Pacific Empire's President, Brad Peters, added, "Partner-funded diamond drilling intersected significant gold at the Elbow Zone and copper at the Sooner Zone. The impact of logging operations over the last five years means exploration that was previously dependent on helicopter support, can now take advantage of the extensive network of roads, making it suitable for summer and winter RC drilling." 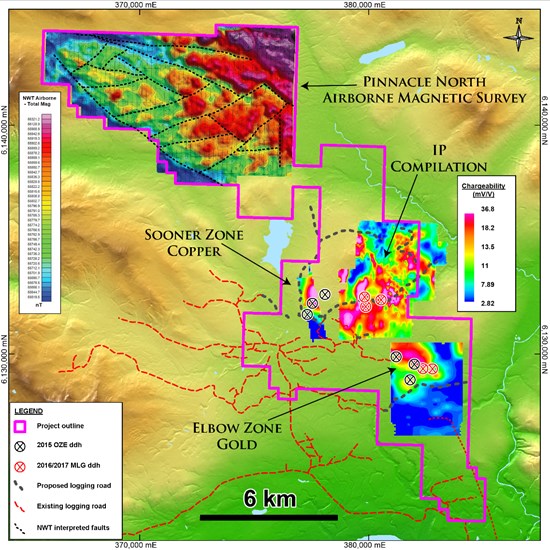 The northern half of the Pinnacle property was staked by PEMC in the fall of 2018 to cover an area of anomalous gold geochemistry in stream sediments and to cover a subtle magnetic anomaly from government funded regional airborne magnetic surveys. In the spring of 2019, PEMC completed a high resolution airborne magnetic survey over the entirety of the property to determine if greater levels of detail could assist in interpreting the underlying bedrock. The survey was successful in providing a much greater level of detail and identifying areas for IP geophysical surveys and follow up drill testing. Initial results suggest the property is centered on an area with a complex magnetic signature cut by numerous northeast trending structures.

Based on positive results from the airborne magnetic survey, an IP survey is planned for the coming weeks to assess the potential for buried gold and copper mineralization. In conjunction with the IP survey, PEMC field crews will be completing seismic surveys to assist with the interpretation of the IP survey results and to determine depth to bedrock if results from the IP survey support RC drilling. 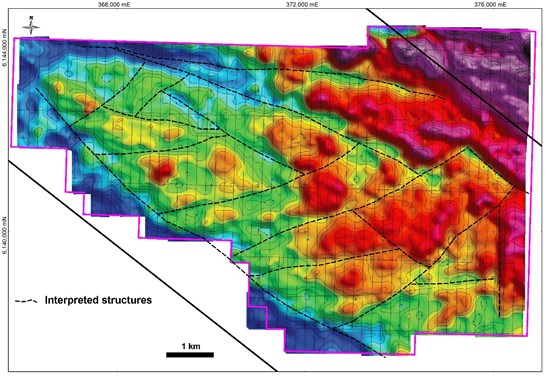 Following the completion of seismic surveys on its Bulkley projects and a soil geochemical survey on the Paragon property, PEMC began RC drill testing its highest-ranking target areas. Results from the soil geochemical survey and initial RC drilling did not return results consistent with PEMC's minimum threshold criteria. As such the Company has elected to focus on its 100% owned Pinnacle Porphyry Project for the balance of the 2019 exploration season.

On March 4, 2019 PEMC and BatteryOne Royalty Corp. ("BatteryOne") entered into a royalty purchase agreement pursuant (the "Initial Agreement") to which BatteryOne was granted a right to acquire a one percent (1%) net smelter returns royalty on the production from the Pinnacle Reef Property upon the expiry or termination of an option agreement dated July 12, 2016 between PEMC and ML Gold (the "Option Agreement"), on the terms and conditions as set out in the Initial Agreement. Following ML Gold's termination of the Option Agreement, BatteryOne exercised its right to acquire the one percent (1%) Pinnacle Reef Royalty in a transaction that closed on August 9, 2019.

Rory Ritchie, P.Geo., Vice President of Exploration for the Company, serves as a qualified person as defined by National Instrument 43-101 and has reviewed the scientific and technical information in this news release, approving the disclosure herein.

By integrating the project generator business model with low-cost reverse circulation drilling, the company intends to leverage its portfolio by identifying, and focusing on, the highest quality projects for partnerships and advancement.

To view the source version of this press release, please visit https://www.newsfilecorp.com/release/46890