Vancouver, British Columbia--(Newsfile Corp. - May 14, 2019) - Outcrop Gold Corp. (TSXV: OCG) ("Outcrop" or the "Company") is pleased to announce that it has entered into an agreement (the "Agreement") with Cedar Capital Corporation ("Cedar") to acquire the Santa Ana Silver Project (the "Property") in consideration for 7,000,000 common shares of the Company (the "Transaction").

The Property comprises 669 hectares in the core of the historical Mariquita silver district, one of Colombia's most prolific colonial silver mining camps with production dating back to the 16th century and continuing until at least 1914. The Santa Ana Mine Group was one of the more important producers in the district. The Property is located approximately 190 kilometres east-northeast of Bogota in Tolima, Colombia. The social, security and logistical aspects of the property are considered favourable.

The grade of the colonial Santa Ana mines is described in a NI 43-101 Technical Report completed on the Santa Ana property for CB Gold dated April 2013, coauthored by Doublewood Consulting Inc. and Antediluvial Consulting Inc., that cites the following archival information from historical Spanish documents regarding past production at Santa Ana:

"The La Porfia, El Dorado, La Manta and La Obdulia mines are located within the property as part of the historic colonial Santa Ana silver mines. The average smelter return for silver ore during those days was '4 marcos per quintal' (approximately 17 kg/t Ag) according to official reports of Hacienda Santa Fe (year 1585) also reporting widths exceeding 1 1/2 varas (4 1/2 feet). More veins were discovered in the Santa Ana (today Falan) and Frias region following exploration during the sixth century, adding 14 new mines to the district, all of them producing over 1 marco of silver per quintal (approximately 4.3 kg/t Ag)."

There is very limited access to any of the colonial workings as most of the adits are either flooded or have collapsed. Most accessible workings are from nineteenth and early twentieth century production - but the veins developed by colonial era mining will be incorporated into a systematic exploration program to be conducted by Outcrop Gold. The ancient mining history, the 11 km extent of the Mariquita district within the Tolima belt mineralization that extends over 25 km, and the high grades of silver and gold reported in the Santa Ana mines suggest that the Project is in one of the most prospective silver-gold vein systems in Colombia.

The Santa Ana Project is central to the Mariquita district and covers six mapped and interpreted vein zones that taken together accumulate over 6 km of total strike. Each zone contains a package of several parallel veins. Veins mapped to date are north-south, but locally east-west veins are observed, and some historic reports indicate production from both vein-trends. The district has a 2.5 km width, with numerous north-south and east-west veins distributed within the north-trending regional Palestina fault zone in second and third order faults. 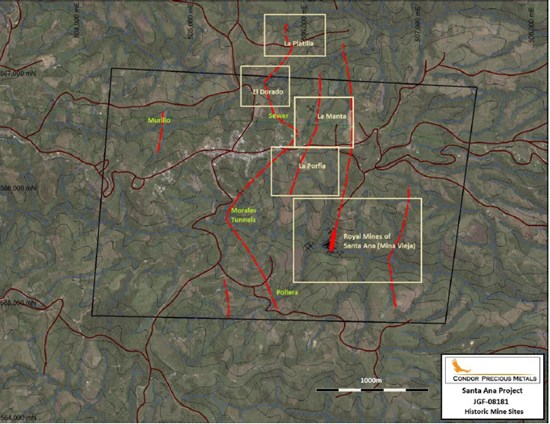 Figure 1 notes: Mapped and inferred veins and historic mine areas from Condor. It is likely more veins will be discovered.

The veins are interpreted to be a composite of early polymetallic gold-silver orogenic thrust-fold related and later epithermal open-space veins in highly deformed Paleozoic schist, quartzite and gneiss of the Cajamarca Formation. Veins are commonly associated with small intrusive body margins. The orogenic veins may have an intrusive affinity, evidenced by associated tungsten minerals. The veins are both high and low-angle and comprised of pyrite, sphalerite, galena, and silver-bearing minerals and native silver in quartz, quartz-carbonate and quartz-adularia gangue. There are probably multiple overprinting mineralization events over a very long period during rapid terrain uplift. The colonial mines reported average mine widths of 1.5 m and this generally conforms to observations in workings and in modern drill intercepts discussed below. The veins range from 0.20 m to 4 m in width.

Condor Precious Metals completed a total of 1,170.5 m drilled in 8 holes on the Santa Ana project. All 8 holes were drilled from a single platform from August 12th, to September 16th, 2012. The drill-holes were fanned out to test 100 m of strike and 150 m down-dip below open workings locally showing assays greater than 10 g Au/t and 1,000 g Ag/t in channel sampling. All eight holes intersected projected veins. Drill results are provided below.

Table Notes: Intersections were composited using a cut-off grade of 100 g/t AgEq, calculated as g Ag/t plus Au times 69.44 (assuming Au price of US $1,250 per ounce and Ag price of US $18 per ounce)). Intersected lengths do not represent true vein thicknesses which are generally 25 to 30% less. Azimuths and dips are not available at the date of this news release. 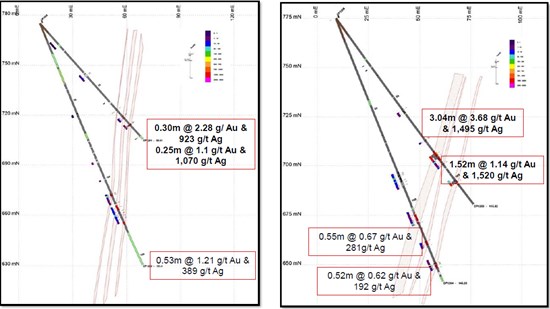 Chip samples collected by Condor from outcrops in 2013-2014 returned several high gold values along with high silver values, including: 68 g/t Au and 422 g/t Ag; 48 g/t Au and 81 g/t Ag; and 36 g/t Au and 163 g/t Ag. The high gold values suggest that precious metal zonation may occur with Ag:Au ratios varying across on the project.

Follow-up reconnaissance prospecting from 2016 to 2018 that returned values from 52 to 250 g Ag/t from surface samples on the project and up to 600 g Ag/t along southern extensions to the Santa Ana mine vein system near the project.

Pursuant to the Agreement, the Company will acquire all of the issued and outstanding shares of Cedar's wholly-owned subsidiary Malew Overseas S.A. ("Malew"). Malew's wholly owned subsidiary Lost City S.A.S. owns the Property. In connection with the Transaction, the Company proposes to issue 350,000 common shares (the "Finder's Shares") to Morten Borch, an arm's length party to the Company, as a finder's fee. The closing of the Transaction is subject to various conditions, including the completion of satisfactory due diligence by Outcrop, and the approval of the Transaction and the Finder's Fee by Outcrop's board of directors and the TSX Venture Exchange.

Condor's quality control procedures during collection of drill core data included the insertion of commercial certified standards and blanks. Rock and drill core samples were sent to the ALS laboratories sample preparation laboratory in Bogota, Colombia, where they were dried, crushed, split and pulverized. The 250g pulps were then sent to Condor's head offices in Vancouver, British Columbia, Canada and subsequently delivered to the ALS Laboratory in North Vancouver for analysis. The samples were analysed for gold using standard fire assay on a 50-gram sample with a gravimetric finish, and for multiple elements by ICP-MS using either an aqua regia (ME-MS41) or a four acid (ME-MS61) digestion. High silver results triggered ore grade Ag analysis using the AG-OG62 procedure. Outcrop Gold thinks that the Condor drill results are reliable at this stage of exploration.

Outcrop is a gold prospect generator active in Colombia. The Company emphasis is on acquiring gold exploration projects with world-class discovery potential. Outcrop performs its own grass roots exploration and then employs a joint venture business model on its projects to maximize investor exposure to discovery and minimize financial risk. Outcrop has Newmont Goldcorp as an active funding partner on its Lyra project in Antioquia directly south of Buritica.

The technical information in this news release has been approved by Joseph P Hebert, a qualified person as defined in NI43-101 and President and CEO to the Company.

To view the source version of this press release, please visit https://www.newsfilecorp.com/release/44765