Phase 1 drilling defined predominantly the strike extent of veins in the La Ivana target with nine holes having an average downhole intercept length of 0.52 m and a weighted average grade of 21.7 g Au/t and 1,329 g Ag/t at an average depth of 55 metres.

Phase 2 drilling defined the down-dip extent of the La Ivana veins with seven holes having an average down hole intercept length of 0.40 metres and a weighted average grade of 7.18 g Au/t and 567 g Ag/t at an average below surface depth of 71 metres and a down dip extent of over 200 metres. The second phase suggests the down-dip limits of the high-grade shoot in La Porfia veins of La Ivana target are sufficiently defined at this stage of exploration drilling - although high-grade mineralization is still open to the north, northwest and locally the southwest. It is inferred that the shoot within the plane of the vein is controlled by the intersection of the north-trending La Porfia vein with the northwest trending El Paraiso vein. This intersection pattern may be useful for locating high-grade shoots in the future. There may be a lithologic control to vein width with black schist typically hosting wider veins than green schist.

Significant drill intercepts from La Ivana are provided in Table 1:

Drilling in La Ivana shows continuous mineralization for 350 metres along strike and 250 metres down dip in La Porfia vein. The Roberto Tovar historic drilling shows continuous mineralization of 200 metre along strike and 150 metres down dip in the Santa Ana vein. Both La Porfia and Santa Ana remain open along strike and dip and represent high-grade mineralization 1.5 kilometres apart within different subparallel vein systems. Primitive artisan workings are common between these areas. Megapozo potentially connects these targets. The north-northeast trending El Dorado and La Porfia veins appear to be linked by the northwest to west northwest El Paraiso vein that extends for up to 1 kilometre into and through the Megapozo target where historic workings are prevalent. An important high-grade shoot occurs at Megapozo related to the convergence of these three veins.

Plan maps and sections show variable vein dips- from high-angle in the El Dorado and Roberto Tovar to shallow and moderate dips in La Ivana. Further drilling new targets is expected to reveal a network of intersecting low-angle and high-angle vein zones each comprised of multiple parallel veins. It is anticipated after drilling in numerous targets are completed that Outcrop will be able to predict potential structural and lithologic controls to high grade mineralization as well as predict the number of 200 to 300 metre high-grades shoots that are likely to occur in each 1,000 metres of vein zone. 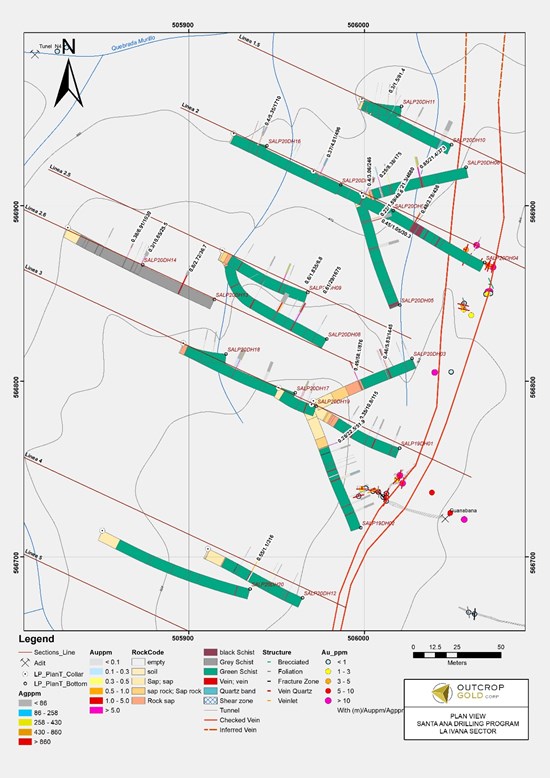 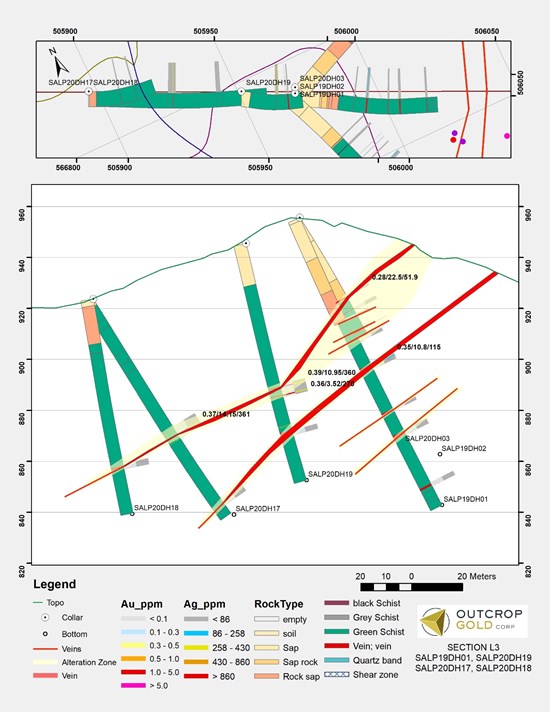 Core samples were sent to ALS Chemex in Medellin for preparation and then to ALS Chemex Toronto for analysis, with approximately three control samples inserted (one blank, one standard and one field duplicate for each twenty samples). The samples were analyzed for gold using standard fire-assay on a 50-gram sample with a gravimetric finish. Multi-element geochemistry was determined by ICP-MS using either aqua regia (ME-MS41) or four acid (ME-MS61) digestion. Comparison to control samples and their standard deviations indicates acceptable accuracy of the assays and no detectible contamination.

The Santa Ana project comprises 7,783 ha located in the Municipality of Falan, Tolima Department, Colombia, approximately 15 km southeast of the of the town of Mariquita, and 190 km from Bogota, Colombia's capital city. The Santa Ana project covers a significant part of the Mariquita District where mining records date to at least 1585. The Mariquita District is the highest-grade primary silver district in Colombia. Under colonial Spanish era control of the mines, silver grades were reported to be among the highest in Latin America with the fourteen mines of Santa Ana producing average smelter returns of 4,300 g Ag/t from veins averaging 1.4 m wide.

Historic mining depths support a geologic and exploration model for a composite mesothermal and epithermal vein system having mineralization that likely extends to great depth. At Santa Ana it is unlikely that there is sharp elevation restriction common to high-grade zones in many epithermal systems with no mesozonal component.

Outcrop is a hybrid prospect generator active in Colombia acquiring gold and silver exploration projects with world-class discovery potential. Outcrop performs its own grass roots exploration and then employs a joint venture business model on its projects to maximize investor exposure to discovery and minimize financial risk. Outcrop has seven primary projects in Colombia with three at an advanced stage of exploration. Outcrop will conduct focused drilling on flagship properties such as Santa Ana to create its own catalysts for value creation and to receive full value for future joint ventures or dispositions.

The technical information in this news release has been approved by Joseph P Hebert, a qualified person as defined in NI43-101 and President and Chief Executive Officer to the Company.

To view the source version of this press release, please visit https://www.newsfilecorp.com/release/58435