Calgary, Alberta--(Newsfile Corp. - January 23, 2023) - Cassiar Gold Corp. (TSXV: GLDC) (OTCQX: CGLCF) (the "Company") is pleased to announce assay results from an additional five diamond drill holes from the 2022 exploration program completed at the Taurus Deposit, located on Company's flagship Cassiar Gold Property. The Taurus Deposit hosts a substantial near-surface, bulk-tonnage, and pit-constrained inferred gold resource of 1.4 million ounces grading 1.14 g/t Au1. Drill holes reported here are from the southwestern and southeastern (Sable) parts of the deposit (Figure 1) and were designed to outline extensions of mineralization that expand the deposit footprint and to further define mineralization continuity. The deposit remains open in all lateral directions as well as at depth.

Cassiar Gold's 2022 program included 70 drill holes and over 23,000 m of diamond drilling that commenced in June and was completed in October 2022. Exploration focused on strategic areas of the Taurus Deposit, key vein prospects at Cassiar South and other brownfields opportunities on the property (Figure 1). Results from 45 drill holes which cumulatively total 15,314 metres of drilling from the 2022 program are yet to be disclosed as the company continues to await the return of additional assay results.

Highlights from the Taurus Southwest and Sable areas:

"These results continue to successfully demonstrate our ongoing commitment to expanding and defining known areas of mineralization. We are very encouraged by the persistence of near surface, wide mineralized intercepts at Taurus Southwest, our widest apparent width to date," stated Marco Roque, CEO of Cassiar Gold Corp. "Recognizing the structures critical to controlling mineralization at Taurus has directly contributed to the success of this drill program and these results now open larger areas for further exploration."

The results reported in this news release are from five drill holes totaling 1,826 m from the Taurus Southwest and Sable areas of the deposit (Figure 1). They were designed to test the potential for extending known mineralization through expansion drilling, confirm historical results, and to assess the continuity of mineralization between resource blocks. Geologically, the holes were designed to evaluate the different mineralization styles which characterize the Taurus Deposit including east-west trending sheeted vein sets and minor shear zones with coalescing pyrite envelopes that together form bulk-tonnage style mineralization, as well as north-northwest trending, east-dipping disseminated pyrite mineralization along the Taurus West Fault corridor.

Drilling at the Taurus deposit continues to demonstrate consistency of grade and apparent thickness of near-surface mineralization above the inferred mineral resource 0.5 g/t Au cut-off, including over broad intervals proximal to the Taurus West Fault. These results suggest the potential for the extension of this broad mineralized corridor to continue along a much larger strike length at the southwest extent of the Taurus Deposit. The deposit remains open in all lateral directions as well as at depth. 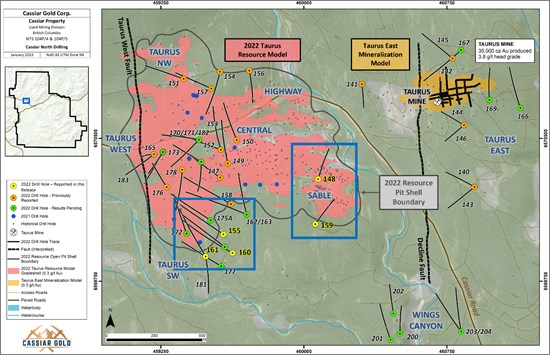 Figure 1. Cassiar North 2022 drill campaign drill hole locations plan map of infill and expansion drilling at the Taurus deposit (blue squares). Drill hole numbers refer to holes with the prefix "22TA-". Drill holes reported in this news release are shown with yellow collars, pending 2022 drill holes for which complete assays have not yet been received are in green, and previously reported 2022 drill holes are in orange.

This drilling campaign at Taurus Southwest intercepted from surface the broadest mineralized result by the Company to date in drill hole 22TA-161. This area remains open along the Taurus West Fault corridor highlighting the importance of this critical structure as a future exploration target with potential to expand the resource base.

Drill hole 22TA-161:
Drill hole 22TA-161 (northwest oriented) was designed to test for the extension of near-surface mineralization in an under-explored area proximal to the Taurus West Fault and beyond the footprint of the 2022 inferred resource. Results (Figure 2, 3; Table 1) include:

This shallow mineralized corridor along the Taurus West Fault is typically characterized by high vein densities in strongly ankerite-sericite altered basalt with medium to coarse grained pyritohedrons and lesser intervals of finely disseminated pyrite mineralization. The results from this drill hole underscore the significant exploration potential along open extensions of the broad north northwest-trending Taurus West mineralized corridor outside the known footprint of the deposit (Figures 2, 3).

This drill hole steps out 80m south-southeast of previous drilling, expanding mineralization beyond the extent of the resource and highlighting continuity of broad mineralized intercepts proximal to and above the Taurus west Fault. The fault dips to the east and mineralization extends deeper in that direction on adjacent cross sections. Section width +- 30m. 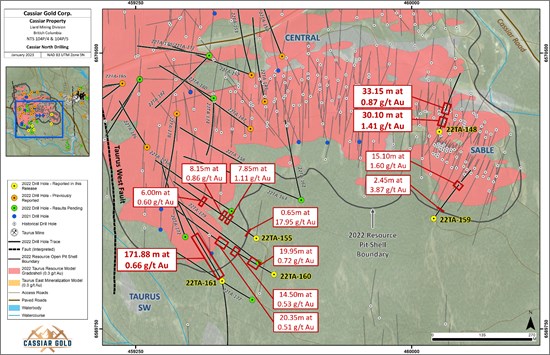 Figure 3. Plan map of 2022 drill holes reported in this release from the Taurus Deposit. The vertical projection of the mineralized intercepts which are reported here are included for reference.

Drill hole 22TA-155:
Drill hole 22TA-155 (northwest oriented) was designed to evaluate the eastern extension of near-surface mineralization and gaps in the mineralization model at southwest Taurus. The drill hole intersected several discrete multi-metre intercepts above the 0.5 g/t Au cutoff of the inferred resource model at moderate depths and along the Taurus West Fault. Results identified the extension of mineralization 40 m beyond the resource pit shell boundary and 135 m beyond the block model. Results include (Figure 3; Table 1):

Table 1. Significant 2022 drilling results from Taurus Deposit based on a >0.5 g/t cutoff. While true thickness has not been established, drill holes are designed to cross at high to moderate angles known corridors of mineralization based on orientations of mineralized areas defined by previous drilling and structural data from oriented drill core and outcropping veins.

Qualified Person
The technical information in this news release has been reviewed and approved by Jill Maxwell, P.Geo., Cassiar Gold Corp.'s Exploration Manager, who is a Qualified Person as defined by National Instrument 43-101.

Quality Assurance (QA) and Quality Control (QC)
The 2022 Cassiar drilling program comprises HQ drill core oriented using the REFLEX ACTIII system. Drill core samples are selected and logged by geologists prior to being cut in half using a diamond cutting saw at a secure facility located in Jade City, British Columbia. Certified gold reference standards and blanks are routinely inserted into the sample stream as part of the Company's QA/QC program. All samples are delivered to the ALS Global preparation facility in Whitehorse, Yukon, where they are processed, and then shipped to the ALS Global analytical facility in North Vancouver, British Columbia. Samples are analyzed for gold by 50-gram fire assay with finish by atomic absorption or gravimetric methods. Screen metallic analysis is performed on selected samples. ALS Global quality systems and technical aspects conform to requirements of ISO/IEC Standard 17025 guidelines.

Cassiar Gold Corp. acknowledges, respects, and supports the rights of Traditional First Nations in the lands and communities where we operate.

This news release may contain forward looking statements including those describing the Company's future plans and the expectations of management that a stated result or condition will occur. Any statement addressing future events or conditions necessarily involves inherent risk and uncertainty. Actual results can differ materially from those anticipated by management at the time of writing due to many factors, the majority of which are beyond the control of the Company and its management. In particular, this news release contains forward-looking statements pertaining, directly or indirectly, to the Company's exploration plans and work commitments, mineral resource estimates and the assumptions underlying such estimates, and economic factors, business and operations strategies.

Although the Company believes that the expectations and assumptions on which the forward-looking statements are based are reasonable, undue reliance should not be placed on the forward-looking statements because the Company can give no assurance that they will prove to be correct. Since forward-looking statements address future events and conditions, by their very nature they involve inherent risks and uncertainties, actual results could differ materially from those currently anticipated due to a number of factors and risks. These include, but are not limited to, general economic, market or business conditions, risks associated with the exploration and development industry in general (e.g., operational risks in development, exploration and production; the uncertainty of mineral resource estimates; the uncertainty of estimates and projections relating to production, costs and expenses, and health, safety and environmental risks), constraint in the availability of services, commodity price and exchange rate fluctuations, the current COVID-19 pandemic, changes in legislation impacting the mining industry, adverse weather conditions and uncertainties resulting from potential delays or changes in plans with respect to exploration or development projects or capital expenditures.

Readers are cautioned that the foregoing list of risk factors should not be construed as exhaustive. These statements speak only as of the date of this release or as of the date specified in the documents accompanying this release, as the case may be. The Company undertakes no obligation to publicly update or revise any forward-looking statements except as expressly required by applicable securities laws.

To view the source version of this press release, please visit https://www.newsfilecorp.com/release/152123