Toronto, Ontario--(Newsfile Corp. - November 9, 2022) - Romios Gold Resources Inc. (TSXV: RG) (OTCQB: RMIOF) (FSE: D4R) ("Romios Gold" or the "Company") is pleased to report that its 2022 IP (Induced Polarization) survey at Trek South has detected a strong IP chargeability high interpreted to be >800 m long and up to 500 m wide that extends beyond 600 m depth beneath both a large, newly discovered, copper and tungsten bearing skarn, and the ~1 km wide porphyry-style alteration and mineralization zone discovered in 2021.

Romios' VP of Exploration, Mr. John Biczok, P. Geo, commented, "The 2022 Trek South summer program was very successful in defining a major geophysical (IP-MT) target underlying the centre of the >1 km wide porphyry-style Cu-Au zone that Romios discovered in 2021. This area has never been drill-tested. The discovery of a copper-tungsten mineralized skarn coincident with part of this strong IP anomaly significantly increases the potential for substantial mineralization within this very well-defined drill target." 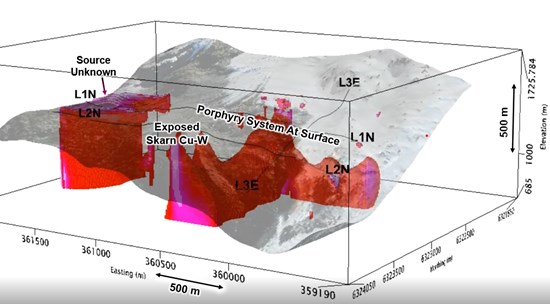 The skarns and the coincident IP anomaly strike toward both a newly mapped granodiorite pluton >600 m wide and a suspected buried pluton, ~1.1 km x 0.8 km, indicated by a recently completed inversion model of an aeromagnetic high (Map 1).

The contacts of the Trek South skarn/IP anomaly with these 2 nearby plutons represent high priority drill targets as the intersection of skarn zones with their source pluton can typically be expected to produce an increase in their size and grade.

Romios' CEO and President, Mr. Stephen Burega commented, "The combination of a large skarn target flanking an intrusion that is a potential host to porphyry type mineralization creates a drill target of the highest priority that will require a substantial financial commitment, and we are actively engaged in identifying a potential partner to bring their expertise and funding to support this important program." He continued, "Both the strength and the size of the main anomaly are very encouraging and, while there is no guarantee of economic mineralization here, the size of the anomaly is comparable to some of the individual ore bodies at the Galore Creek deposit and it is flanked by 3 additional anomalies that remain to be evaluated in the field." 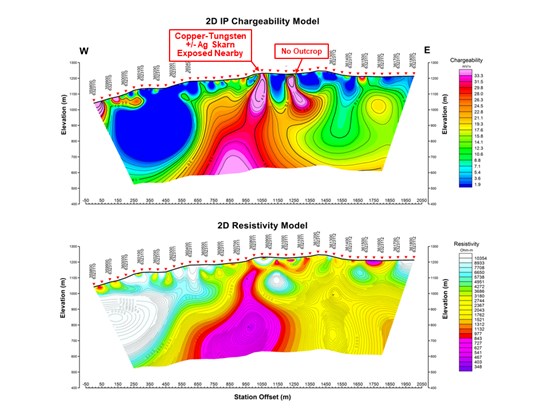 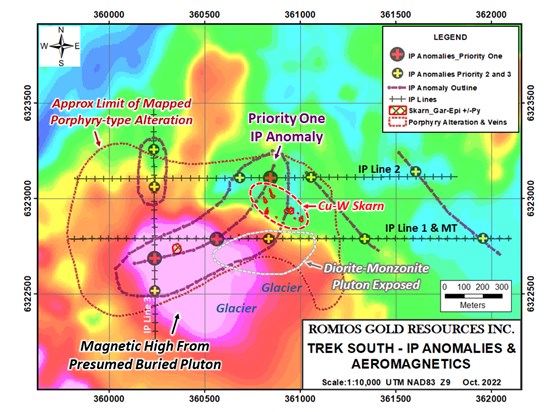 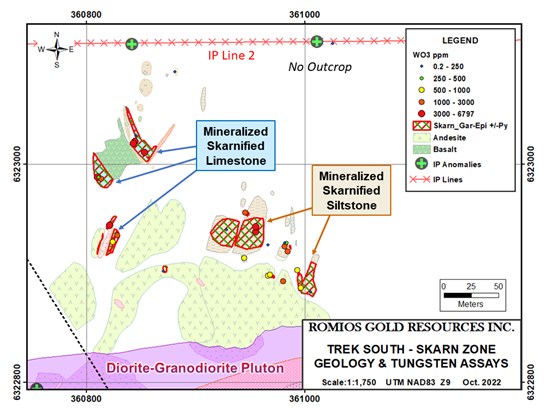 COPPER-TUNGSTEN SKARN: High tungsten values have been returned from Trek South for the first time and are localised in a large area of newly discovered skarnified limestone and siltstone (See Map 2). It should be noted that tungsten mineralization is often difficult to discern and was not obvious in the field; its presence was revealed only by assays, consequently it has not been sampled or mapped in any systematic detail as yet. The samples referred to in this release were primarily of gossanous, pyritic zones in the skarns and include grabs and numerous chip samples across 10-30 cm widths as well as several wider chip samples with appreciable tungsten grades, e.g. 2.0 m @ 0.16% WO3 and 0.5 m @ 0.4% WO3.

IP SURVEY: The IP (Induced Polarization) geophysical technique is particularly effective at detecting disseminated sulphide minerals such as chalcopyrite and pyrite dispersed throughout the targeted host rocks. In July 2022, Simcoe Geoscience completed 3 lines of Alpha IPTM over the Trek South porphyry target and the newly discovered Cu-W skarn adjacent to it with very encouraging results.

3D MAGNETIC SUSCEPTIBILITY MODEL OF 2007 AEROMAGNETIC SURVEY: An aeromagnetic survey was completed over the Trek claims for Romios in 2007 by Fugro Airborne Surveys Inc. The resultant maps clearly show a circular magnetic feature approximately 1.1 km x 0.8 km that underlies a large portion of the now ice-free Trek South porphyry-style epidote alteration and quartz-pyrite stockwork area (Map 1). In 2022, Simcoe Geoscience completed a 3D inversion model of this aeromagnetic data over the area covered by IP Line 1 and the coincident MT survey line. This model supports the presence of a large pluton under the centre of the porphyry system.

RELATION TO THE TREK SOUTH PORPHYRY SYSTEM: The same productive granitoid intrusions that produce porphyry copper-gold deposits commonly produce skarn or other types of replacement mineralization along their margins if they intersect limestone or other calcareous sediments or volcanics. This is especially true in the case of the alkalic porphyries that are so common in the Golden Triangle; for example, in the case of the Galore Creek deposit(s), a large proportion of the mineralization is found in the sedimentary and volcanic rocks that are cut by the alkalic intrusions.

The samples discussed in this document were grab and chip samples considered representative of the outcrops and mineralization being sampled. They were submitted to the ISO/IEC 17025 accredited ALS Canada Ltd. laboratories in Terrace and Vancouver, BC for assay and multi-element analyses, followed by a lithium borate fusion method (ME-MS85) for samples that returned high tungsten values in the multi-element scans. As a matter of procedure, a rigorous quality assurance and quality control program was implemented to ensure reliable assay results by inserting alternating blanks and commercial assay standards at every 10th position in the sample series.

The technical information in this news release has been reviewed and approved by John Biczok, P. Geo., VP-Exploration for Romios Gold and a Qualified Person as defined by National Instrument 43-101. In addition to his extensive experience with several major mining companies exploring for a wide variety of ore deposit types across Canada and India, Mr. Biczok spent 12 years conducting exploration and research at the Musselwhite gold mine in NW Ontario. The geophysical aspects of this document were also reviewed and approved by Romios' consulting geophysicist - Mr. Bob Lo, P. Eng., a Qualified Person as defined by National Instrument 43-101.

Romios Gold Resources Inc. is a progressive Canadian mineral exploration company engaged in precious- and base-metal exploration, focused primarily on gold, copper and silver. It has a 100% interest in the Lundmark-Akow Lake Au-Cu property plus 4 additional claim blocks in northwestern Ontario and extensive claim holdings covering several significant porphyry copper-gold prospects in the "Golden Triangle" of British Columbia. Additional interests include the Kinkaid claims in Nevada covering numerous Au-Ag-Cu workings and two former producers: the Scossa mine property (Nevada) which is a former high-grade gold producer and the La Corne molybdenum mine property (Quebec). The Company retains an ongoing interest in several properties including a 20% carried interest in five of Honey Badger Mining's claim blocks in the Thunder Bay silver district of northwestern Ontario; a 2% NSR on McEwen Mining's Hislop gold property in Ontario; a 2% NSR on Enduro Metals' Newmont Lake Au-Cu-Ag property in BC, and the Company has signed a definitive agreement with Copperhead Resources Inc. ("Copperhead") whereby Copperhead can acquire a 75% ownership interest in Romios' Red Line Property in BC.

As part of our ongoing effort to keep investors, interested parties and stakeholders updated, we have several communication portals. If you have any questions online (Twitter, Facebook, LinkedIn) please feel free to send direct messages.

To view the source version of this press release, please visit https://www.newsfilecorp.com/release/143599