Highlights of the 2022 Sabre Prospecting Program 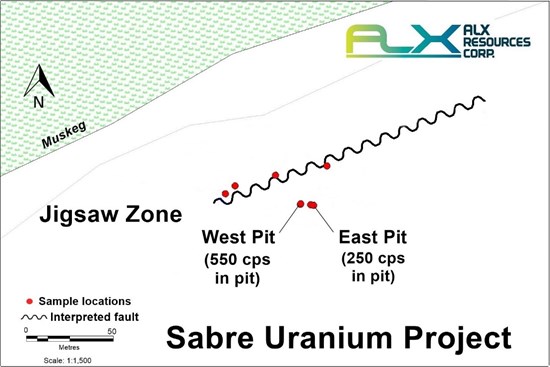 To view additional maps and photos of Sabre click here 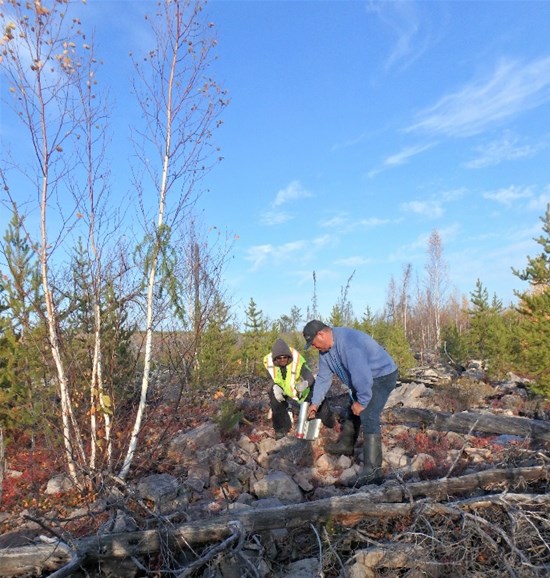 ALX Sampling at the West Pit 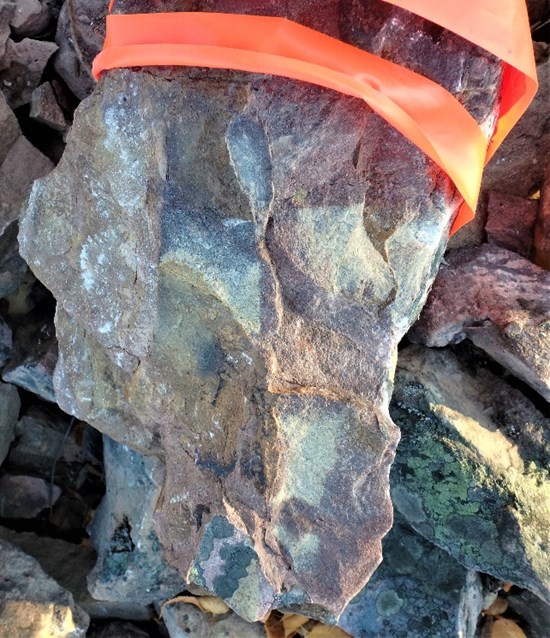 The elevated radioactivity in the West and East pits is associated with dark purple to red sandstone with bleached patches and local spots of a very pale greenish alteration. Samples at the West Pit may be associated with frost-heaved sub-crop or a very large boulder. ALX considers the radioactive sandstone found at the Jigsaw Zone highly significant, considering the depth to basement is estimated to be at least 300 metres, which implies the occurrence of a significant hydrothermal event that carried silica-rich and uranium-bearing fluids to surface.

Four samples of the quartz vein and quartz-breccia sandstone from the Jigsaw Zone and four radioactive samples from the West and East pits adjacent to the Jigsaw Zone were submitted to the Saskatchewan Research Geoanalytical Labs in Saskatoon, Saskatchewan for a full suite of geochemical analyses. In addition, sub-samples were submitted for short-wave infrared spectroscopy (SWIR) analyses to determine the clay signature of the samples. Results will be released after their receipt, compilation and interpretation.

Sabre is located along the northern margin of the Athabasca Basin, a dominantly sandstone-infilled basin which unconformably overlies crystalline basement rocks of the Tantato Domain of the Canadian Shield in northern Saskatchewan. The Athabasca Basin area is a fertile uranium district that hosts the world's highest-grade uranium mines, with over 900 million pounds of U3O8 produced since mining began in at the Nicholson Mine in 1949.

The Project is situated within the Snowbird Tectonic Zone ("STZ"), a major regional geological structure, and includes several parallel northeast-trending fault zones, as well as cross-cutting structures. Numerous historical uranium showings are found within the STZ, such as the Nisto Mine, Black Lake, and the Fond du Lac Uranium Deposit.

The Fond du Lac Uranium Deposit, located approximately 15 kilometres west of the centre of Sabre, was discovered in 1970 by Camok Ltd., a predecessor company of Orano Canada Ltd., after tracing radioactive boulders to their source area and grid drilling. A shallow historical resource was calculated in 1970 of 990,000 pounds of U3O8 (450,000 kilograms) at an average grade of 0.25% but was never advanced further (Source: Saskatchewan Mineral Deposits Index, Mineral Property #1572. This historical resource is not necessarily indicative of the mineralization present at Sabre, nor is compliant with the standards of National Instrument 43-101 and has not been verified by ALX's Qualified Person. It is included for information purposes only.) Uranium mineralization at the Fond du Lac deposit is described as a "high-grade" central core (>0.06% and up to 5% U3O8) and a diffuse "low-grade" aureole with 0.02% to 0.06% U3O8 (Homeniuk, Clark and Bonnar, 1982).

In 1978-1980, radioactive sandstone boulders were discovered at Sabre by Marline Oil, which led to additional prospecting, ground geophysics, rock sampling, and biogeochemical sampling over the three exploration years, but no drill holes were completed1. In 2006, UEX Corporation targeted an airborne conductor with drill hole MNL-02, which intersected intense dravite alteration in the sandstone column2. Dravite is commonly associated with hydrothermal alteration in the Athabasca Basin and can be found in close proximity to unconformity-type uranium mineralization.

The technical information in this news release has been reviewed and approved by Robert Campbell, P.Geo., who is a Qualified Person in accordance with the Canadian regulatory requirements set out in National Instrument 43-101.

Historical geochemical results and geological descriptions quoted in this news release were taken directly from assessment work filings published by the Government of Saskatchewan. Management cautions that historical results were collected and reported by past operators and have not been verified nor confirmed by its Qualified Person, but create a scientific basis for ongoing work in the Sabre project area. Management further cautions that historical results or discoveries on adjacent or nearby mineral properties are not necessarily indicative of the results that may be achieved on ALX's mineral properties.

ALX's mandate is to provide shareholders with multiple opportunities for discovery by exploring a portfolio of prospective mineral properties in Canada, which include uranium, lithium, nickel-copper-cobalt and gold projects. The Company uses the latest exploration technologies and holds interests in over 220,000 hectares of prospective lands in Saskatchewan, a stable jurisdiction that hosts the highest-grade uranium mines in the world, a producing gold mine, and production from base metals mines, both current and historical.

ALX owns 100% interests in four lithium exploration properties staked in September 2022 collectively known as the Hydra Lithium Project, located in the James Bay region of northern Quebec, Canada, and a 100% interest in the Anchor Lithium Project in Nova Scotia, Canada.

Statements in this document which are not purely historical are forward-looking statements, including any statements regarding beliefs, plans, expectations or intentions regarding the future. Forward-looking statements in this news release include: ALX's 2022-2023 exploration plans at the Sabre Uranium Project, and ALX's ability to continue to expend funds at that project. It is important to note that the Company's actual business outcomes and exploration results could differ materially from those in such forward-looking statements. Risks and uncertainties include that ALX may not be able to fully finance exploration on our exploration projects, including drilling; our initial findings at our exploration projects may prove to be unworthy of further expenditures; commodity prices may not support further exploration expenditures; exploration programs may be delayed or changed due to any delays experienced in consultation and engagement activities with First Nations and Metis communities, and local landowners in the region, and the results of such consultations; and economic, competitive, governmental, societal, public health, weather, environmental and technological factors may affect the Company's operations, markets, products and share price. Even if we explore and develop our projects, and even if uranium, lithium, nickel, copper, gold or other metals or minerals are discovered in quantity, ALX's projects may not be commercially viable. Additional risk factors are discussed in the Company's Management Discussion and Analysis for the Six Months Ended June 30, 2022, which is available under the Company's SEDAR profile at www.sedar.com. Except as required by law, we will not update these forward-looking statement risk factors.

To view the source version of this press release, please visit https://www.newsfilecorp.com/release/141774