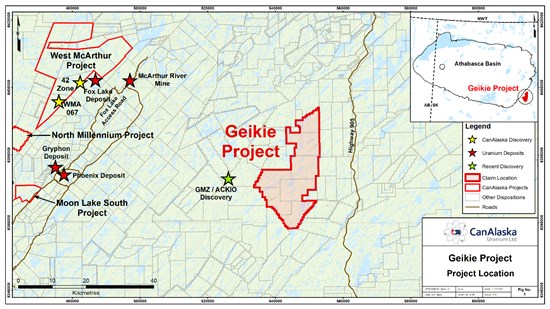 The airborne survey generated multiple radiometric anomalies based on the combination of Uranium, Thorium, and Potassium ratio analysis that when combined with the magnetic data allowed for the confirmation of previously known structural corridors and the delineation of two new additional structural corridors. Prior to this survey, two major north-south features were recognised with prominent coincident magnetic and topographic trends, which are interpreted to be related to the Tabbernor Crustal Fault Zone. The survey identified two additional major north-south trending features that present equally prospective targets and allow for a detailed structural interpretation. When the element ratios from the radiometric survey and new high-resolution magnetic data are combined with the new structural interpretation, four priority areas were identified. The most significant target area includes the expansion of the Mud Lake trend (Figure 2).

The high-resolution radiometric and magnetic survey data was acquired over the entire Geikie project area along 100 m spaced lines with 1,000 metre spaced tie lines. A total of 3,831 line kilometres of survey data was collected at a nominal flight height of 35 metres. The survey was completed by Precision GeoSurveys Inc., based out of Langley, British Columbia. 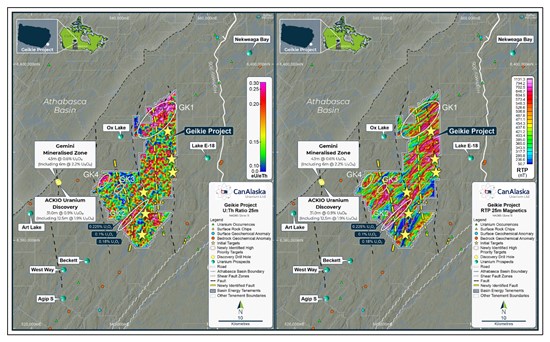 In collaboration with its partner, the Company is planning a systematic exploration strategy for the Geikie project. This includes ground follow-up reconnaissance mapping and sampling of the high-priority target areas, followed by additional historical compilation, a high-resolution airborne electromagnetic survey, and diamond drilling.

GK1 - A large cluster of radiometric anomalies within a 9 km by 3 km area with a north-easterly trend, located in the northern quarter of property. A historic electromagnetic survey exists for the western portion of the identified target which appears to show a strong conductor running parallel to the anomalous cluster. Two significant northerly trending structural corridors intersect this target area.

GK2 - The Mud Lake target area contains historical prospecting information, with historic grab samples recorded up to 0.225% U3O8 and 0.18% U3O8 within mapped Wollaston calcsilicate rocks. The radiometric data shows a north-easterly trend of anomalies being crosscut by two north north-westerly trending structural corridors, that appear coincident with the historic anomalous rock chips. This target area is located approximately 10 km along strike from drilling completed by Baselode Energy Corp. that identified basement hosted mineralization at the Beckett target in first pass drilling, and within a fertile corridor of biotite gneiss that hosts the high grade (58.0% U3O8) Agip-S uranium prospect. The survey has significantly expanded this target area.

GK3 - A discrete coherent radiometric anomaly, located in an area of interpreted structural complexity. The basement geology appears to be disrupted by a north-westerly trending structure that is coincident with the anomalous uranium grab samples from GK2 to the south.

CanAlaska CEO, Cory Belyk, comments, "This maiden exploration program under the new option earn-in agreement with Basin Energy is a great first step in development of drill targets on this new project. Identification of two new structural corridors with coincident anomalies is a great outcome from these early work programs that are fully funded by Basin Energy. The CanAlaska team is excited by these new targets and is looking forward to Basin Energy's first drilling program at Geikie currently planned for 2023. CanAlaska's ownership level in Basin Energy provides significant upside opportunity to our shareholders to participate in a discovery."

The Geikie Project is located just outside the Eastern Boundary of the Athabasca Basin within the Wollaston Domain. The Project area has been subject to minimal exploration for uranium, with most significant work targeting base metals between 1967 and 1980. During this regional work, a series of mineralized showings were discovered in the Mud Lake and Marina areas. The Mud Lake uranium-molybdenum showing recorded a series of anomalous rock chips with grades of up to 0.225% U3O8, 5.2% Mo, and 1.4% Cu. The Marina lead-zinc prospect recorded anomalous mineralization in outcrop of up to 2.03% Pb, 7.2% Zn and 0.93 oz/t Ag.

The primary target on the Geikie project is basement-hosted uranium mineralization where uranium bearing structures intersect favourable intercalated pelitic and calc-silicate host rocks. The Geikie project is located within 10 km of recent discoveries of basement-hosted uranium mineralization at the Gemini Mineralised Zone and ACKIO.

The Company was recently featured by BTV on the BNN Bloomberg Channel. An update on the Company's activities can be viewed in the feature at the following link: CanAlaska Uranium: Advancing the West McArthur Project (b-tv.com)

To view the source version of this press release, please visit https://www.newsfilecorp.com/release/140891