Vancouver, British Columbia--(Newsfile Corp. - October 18, 2022) - Prospector Metals Corp. (TSXV: PPP) (OTCQB: ETHOF) (FSE: 1ET) ("Prospector" or the "Company") is pleased to announce that it has acquired a 100% interest in three Ni-Cu projects in Quebec through staking as part of a broader Ni-Cu-PGE exploration strategy with a focus on high-grade, conduit-hosted deposits hosted within under-explored large igneous provinces such as the Grenville Domain and the Labrador Trough in Quebec. The targeting strategy centers on technical re-evaluation of publicly available geologic and geophysical data to define robust drill ready targets that have been overlooked (Figure 1). 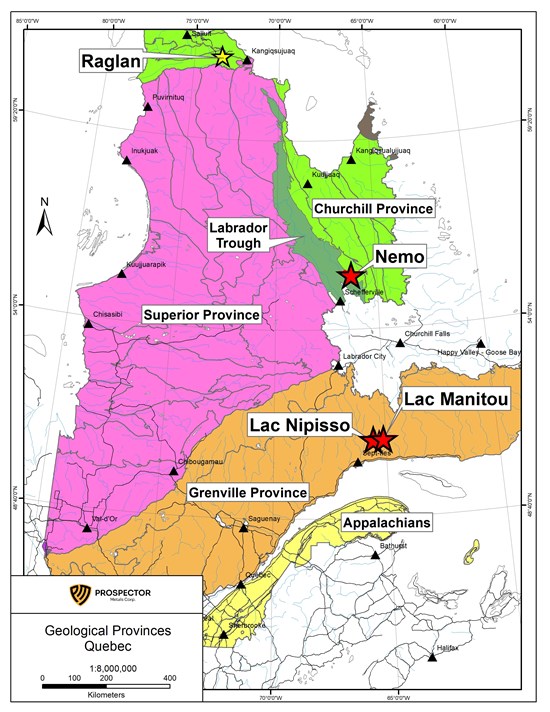 Rocks in the region are part of the allochthonous polycyclic belt of the Proterozoic Grenville Geologic Province. These rocks comprise older Proterozoic gneisses and paragneisses intruded by 1.34 Ga anorthosite complexes, which host gabbronoritic to troctolitic to pyroxenitic to peridotitic border phase intrusions along their outer margins. The anorthosite complexes are of the same age and trans-continental suite of rocks which host the Voisey's Bay Ni-Cu deposits in Labrador to the east. The anorthosite complexes and associated rocks are interpreted to have been emplaced in an intracontinental extensional environment, which provided trans-crustal conduits for the emplacement of high-Mg mafic magmas prospective for Ni-Cu-(Co-PGE) magmatic sulfide mineralization. The Grenville Province contains a number of these anorthosite massifs and associated more mafic to ultramafic rocks, as well as several other generations of mafic dykes, plutons, and complexes, all of which have potential to host magmatic Ni-Cu (Co-PGE) deposits. The most prospective areas are associated with major structures that transect or border the anorthosite complexes. Specific target areas considered to be most prospective for Cu-Ni-(Co-PGE) deposits are associated with these volumetrically subordinate mafic to ultramafic portions of the otherwise dominantly anorthositic complexes, and commonly exhibit coincident conductive electromagnetic anomalies and positive magnetic anomalies. Grades of known massive magmatic sulfide occurrences elsewhere in the region, such as the Lac Volant Ni-Cu occurrence, are in the range of 1.5% Ni and 2% Cu 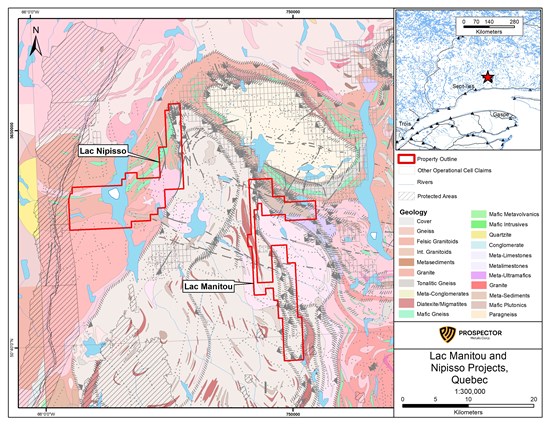 The Nemo Property consists of 15,695 hectares acquired through staking, in the southern Labrador Trough, QC, located 80 km northeast of Schefferville. 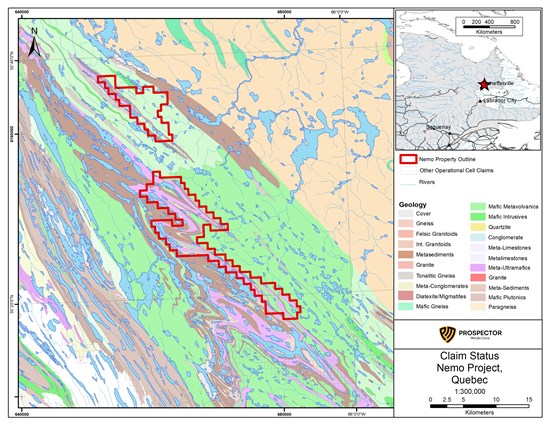 The Nemo project comprises 15,695 ha located 80 km northeast of Schefferville and represents a rare opportunity to acquire a large claim area of previously poorly explored mafic-ultramafic rocks within the prospective Doublet Terrane of the Labrador Trough.

The Labrador Trough represents the easternmost segment of the 1.88-billion-year-old Circum-Superior Large Igneous Province that, in its northern and western portions, hosts the largely well explored Cape Smith and Thompson Nickel Belts respectively. However, the Trough remains one of the geologically least thoroughly explored regions of Canada. It hosts voluminous mafic-ultramafic rocks of the Montagnais Sill Complex, and attendant high-Mg basalts, that are related to the Ni-Cu-PGE mineralised mafic-ultramafic rocks hosted in neighbouring segments, and exhibits abundant evidence for hot, high-Mg melts and strong differentiation required for NI-Cu-PGM transport and deposition, as well as hosting abundant sulphidic metasediments as a source of crustal sulphur to combine with the magmatically derived metals. In addition, the Labrador Trough encompasses a large scale crustal-penetrating northwest trending fault system at the margin of the Archean Superior Province that provided ideal mineralising conduits for mantle-derived magmas. Exploration will focus on high-grade conduit hosted Ni-Cu-PGM deposits hosted by potential feeder systems to the mafic-ultramafic sills, that garner a high value, occupy a small footprint, and commonly occur in clusters. Historical exploration largely focussed on outcropping occurrences of Ni-Cu-Fe sulphides along planar sill margins where the mafic-ultramafic intrusions are in contact with sulphidic sedimentary rocks, and comprised some frequency domain EM surveys and prospecting, with little to no drilling.

Following a digital complication and audit of the available historical data for the projects, initial Helicopter VTEM surveys may be flown, followed by prospecting programs to target and ground truth mineralization with an emphasis on potential structural controls. Localized ground geophysics of selected targets would likely follow should this be warranted to define highly conductive buried targets in potential feeder systems.

The technical content disclosed in this press release was reviewed and approved by Jo Price, P.Geo., M.Sc., VP Exploration of Prospector, and a Qualified Person as defined under National Instrument NI 43-101 ("NI 43-101").

Prospector also announces that it has given notice to vendors 1026452 BC LTD. and Doug Leishman to terminate Prospector's option to acquire up to a 100% interest in the Perk-Rocky Property, located in British Columbia, pursuant to the property option agreement dated May 10, 2019, as amended July 23, 2021.

This press release contains certain "forward-looking statements" within the meaning of Canadian securities legislation, including, but not limited to, statements regarding the Company's plans with respect to the Company's projects and the timing related thereto, the merits of the Company's projects, the Company's objectives, plans and strategies, and other project opportunities. Although the Company believes that such statements are reasonable, it can give no assurance that such expectations will prove to be correct. Forward-looking statements are statements that are not historical facts; they are generally, but not always, identified by the words "expects," "plans," "anticipates," "believes," "intends," "estimates," "projects," "aims," "potential," "goal," "objective,", "strategy", "prospective," and similar expressions, or that events or conditions "will," "would," "may," "can," "could" or "should" occur, or are those statements, which, by their nature, refer to future events. The Company cautions that Forward-looking statements are based on the beliefs, estimates and opinions of the Company's management on the date the statements are made and they involve a number of risks and uncertainties. Consequently, there can be no assurances that such statements will prove to be accurate and actual results and future events could differ materially from those anticipated in such statements. Except to the extent required by applicable securities laws and the policies of the TSX Venture Exchange, the Company undertakes no obligation to update these forward-looking statements if management's beliefs, estimates or opinions, or other factors, should change. Factors that could cause future results to differ materially from those anticipated in these forward-looking statements include the risk of accidents and other risks associated with mineral exploration operations, the risk that the Company will encounter unanticipated geological factors, or the possibility that the Company may not be able to secure permitting and other agency or governmental clearances, necessary to carry out the Company's exploration plans, risks and uncertainties related to the COVID-19 pandemic and the risk of political uncertainties and regulatory or legal changes in the jurisdictions where the Company carries on its business that might interfere with the Company's business and prospects. The reader is urged to refer to the Company's reports, publicly available through the Canadian Securities Administrators' System for Electronic Document Analysis and Retrieval (SEDAR) at www.sedar.com for a more complete discussion of such risk factors and their potential effects.

To view the source version of this press release, please visit https://www.newsfilecorp.com/release/140871