Burlington, Ontario--(Newsfile Corp. - September 26, 2022) - Silver Bullet Mines Corp. (TSXV: SBMI) (OTCQB: SBMCF) ('SBMI' or 'the Company') has assayed, among other elements, significant quantities of palladium and gold in the mineralized material from its Buckeye Silver Mine in Arizona. These surprise discoveries are not factored into any of the Company's internal financial projections. This mineralized material was taken from a newly exposed section at the Buckeye.

How The Gold and Palladium Were Found

The gold and palladium were discovered after SBMI initially processed roughly 60 tons of Buckeye Mine material at its 100%-owned mill, and then encountered challenges in pouring proper silver dore bars to satisfy the outstanding sample run order. An example of such challenges is in the picture below. 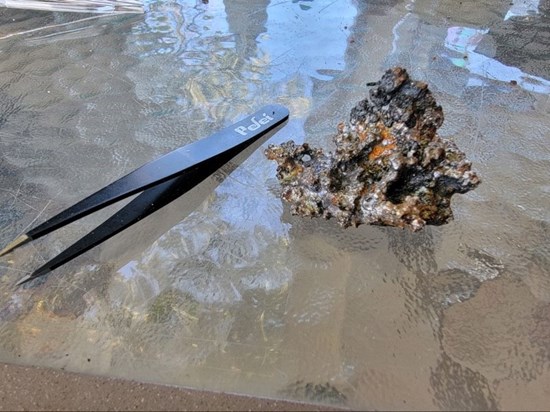 Recent dore bar from material bulk sampled at the Buckeye Mine

To help identify the possible source of this, SBMI sent a sample (the "First Batch") on September 7, 2022, from its concentrates of the 60 ton bulk sample to Lone Pine Analytical, a third-party lab, for further analysis. That analysis completed on September 11, 2022 revealed, from this sample, being an average of 2 collected concentrate samples, elevated levels of palladium and gold, as per the chart below:

In response to these unusual values, SBMI will be undertaking referee sampling with another independent third-party ISO accredited lab.

"Those are astonishing results for the gold and palladium," said A. John Carter, SBMI's CEO. "To the best of our knowledge the only significant producer of palladium in the United States of America is Sibanye-Stillwater in Montana, so this is a possible game-changer, not just for SBMI but for platinim group metal exploration in Arizona. We have heard anecdotal evidence of Pt-Pd production as a by-product of porphyry mining in the Globe area and have seen data from a local prospective Pt-Pd property, but we are still investigating what our results mean. At this time the Company is actively investigating the source and recovery of the anomalous palladium and gold values and are currently engaging additional technical support in this pursuit."

The Company believes the results above are representative of the 60 tons of the material extracted from the Buckeye Mine.

SBMI then took, from another larger bulk sample, a sample batch (the "Second Batch") of a further seven samples from various locations in the mill. This bulk sample represents roughly 140 tons of material from the Buckeye Mine. SBMI's assay team had initially assayed those samples for silver only. Subsequently, each of the following samples from this 140 ton bulk sample were labelled with unique identifiers as shown below:

Those labels were provided by SBMI's assay team to Lone Pine Analytics by the leader of SBMI's assay team, Mr. Robert Budd, who also collected and assayed those samples for silver. SBMI has on prior occasions and on its website made disclosure of Mr. Budd's credentials and QAQC processes, and will include these matters below in the QA/QC for SBMI.

After being assayed for silver only by SBMI, the Second Batch was then sent to Lone Pine Analytical for further analysis of additional elements. The average values for Au and Pd of the 7 samples returned from Long Pine Analytics for the gold and the palladium were as follows: 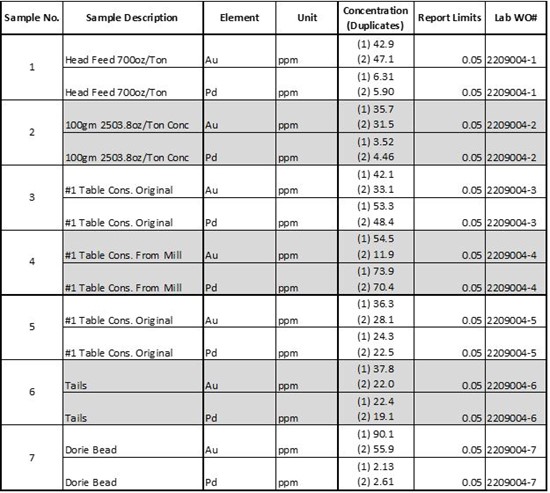 To view an enhanced version of this graphic, please visit:
https://images.newsfilecorp.com/files/8464/138387_capture.jpg

The Company believes these results are representative of the 140 ton bulk sample. The complete assay certificates with a photo of each sample will be posted to the Company's website.

In response to these unusual values, SBMI will be undertaking referee sampling with another independent third party ISO accredited lab.

All of the roughly 200 tons of material (combined from the 2 bulk samples) were taken directly from the vein accessed at the lower drift. All 200 tons were taken and processed in the normal course, with no selective sampling.

"We made a decision early on to build our own mill in Arizona to high standards, and as a result we have been able to immediately recognize there were significant amounts of elements other than silver in this new material" continued Mr. Carter. "Standard exploration techniques may not have found the gold or palladium without the expenditure of millions of exploration dollars. We are there now, more quickly for much less money."

SBMI has found a potential buyer for the concentrates who is likely able to process the palladium in addition to the gold and silver, but before making final decisions SBMI is waiting on further assay data and input from metallurgists, engineers and others.

The samples analyzed by SBMI at its facility near Globe, Arizona were processed by Mr. Budd through the Lab Jaw Crusher, Lab Hammer Mill and Splitter Box into an aliquot. Most of the pulverized aliquot was mixed with a flux and flour combination and melted in a crucible at 1,850 degree Fahrenheit, with the remainder being logged and archived. Upon cooling, the poured melt was in the form of a metal button and slag, following which a bone ash cupel was utilized to eliminate the lead in the button to form a bead. The bead was then weighed, following which a solution of 6 to 1 distilled water to nitric acid was utilized to dissolve the silver in the bead at approximately 175 degrees Fahrenheit. A much more detailed description of the process and a picture of the assay lab can be found at https://www.silverbulletmines.com/qaqcassaylab.

For each batch, Lone Pine Analytical of Phoenix, Arizona sampled two distinct samples (approx 200mg), digested, filtered, diluted and analyzed. For the digestion, the lab used [1mL HF: 4.5mL Nitric Acid: 4.5mL HCI]. The samples were digested in a microwave in sealed PTFE tubes where the temperature reached 200C with a total cycle time of 40 minutes. Bismuth (Bi) was used the internal standard. A three-point calibration, plotted through zero was used with excellent linear correlation for each element. Thus, the lab used an internal and external standards (instrument calibration). Chain of custody protocols were strictly observed. Lone Pine Analytical, as of September 11, 2023, is in the process of renewing its ISO /IEC-17025 lab accreditation with a scope for metals in soils and rocks

Mr. Robert G. Komarechka, P.Geo., an independent consultant, has reviewed and verified SBMI's work referred to herein, and is the Qualified Person for this release.

By their nature, forward-looking statements include assumptions, and are subject to inherent risks and uncertainties that could cause actual future results, conditions, actions or events to differ materially from those in the forward-looking statements. If and when forward-looking statements are set out in this new release, SBMI will also set out the material risk factors or assumptions used to develop the forward-looking statements. Except as expressly required by applicable securities laws, SBMI assumes no obligation to update or revise any forward-looking statements. The future outcomes that relate to forward-looking statements may be influenced by many factors, including but not limited to: the impact of SARS CoV-2 or any other global virus; reliance on key personnel; the thoroughness of its QA/QA procedures; the continuity of the global supply chain for materials for SBMI to use in the production and processing of ore; shareholder and regulatory approvals; activities and attitudes of communities local to the location of the SBMI's properties; risks of future legal proceedings; income tax matters; fires, floods and other natural phenomena; the rate of inflation; availability and terms of financing; distribution of securities; commodities pricing; currency movements, especially as between the USD and CDN; effect of market interest rates on price of securities; and, potential dilution. SARS CoV-2 and other potential global viruses create risks that at this time are immeasurable and impossible to define.

To view the source version of this press release, please visit https://www.newsfilecorp.com/release/138387

Sign up to receive news releases by email for Silver Bullet Mines Corp. or all companies belonging to the Mining and Metals industry.