Quebec Pegmatite Corporation,(QPC) a subsidiary of Coloured Ties Capital Inc, is pleased to announce that QPC has acquired 100% interest, subject to a 3% NSR that may be reduced to 1.5% with a $2,000,000 payment in 84 mineral claims in the Corvette Lithium District in Quebec from an arms length vendor. The claims have been acquired for cash payment and issuance of common shares in QPC. The Company is currently pursuing other potential acquisitions in the area and will not disclose exact terms publicly for competitive reasons.

In addition to the 84 claims, QPC has acquired an additional 234 claims surrounding the 84 claims by map staking. These 234 claims are 100% owned by QPC and not subject to any payments or royalties to third parties.

In total, the newly acquired Corvette Claim block now consist of 318 Quebec Ministère de l'Énergie et des Resources (MERN) CDC Mineral claims, totalling approximately 16,300 hectares or 163 square kilometers. The claims cover an intrusion which has been documented in past literature publications to be unexplored but to have potential to hold pegmatites and spodumene lithium mineralization. QPC has not conducted any exploration on these claims to confirm this potential.

The Company will design and conduct an aggressive exploration plan on these claims as Quebec work seasons permit in the area.

On July 25, 2022, Coloured Ties reported that the Company has purchased 62 mineral claims, in the Cadillac-Pontiac region, about 50km southwest of Val-d'Or. The claims are immediately adjacent to claims currently held by Winsome Resources, a well-funded ASX listed Lithium exploration company and Vision Lithium, a TSX-V listed Lithium explorer. The Mazérac claims are accessible by a dense network of trails and other logging roads. The area also accessible through boat or seaplane within watershed of Decelles water reservoir, hosting the Rapid-7 hydroelectric dam of Decelles.

The Cadillac-Pontiac area has gained attention due to recent discoveries of several high-grade spodumene prospects. The latest discovery of high-grade lithium prospects by Vision Lithium Inc, spurred several other exploration and drill programs within the Cadillac area. Since December 2021, approximately 4000 new claims have been registered in the greater Mazerac area and the Pontiac Sub province region, south of Val-d'Or and Rouyn-Noranda.

The claims have been acquired from prospectors, Mr Griesbach and Junita Asihto. Mr Griesbach is a Canadian-certified geologist with more than 40 years of mineral exploration experience across Canada, Africa, China, and Southeast Asia; Mr. Junita Asihto is a Quebec-based prospector with a strong understanding of the Mazéracregion. The acquisition is subject to final TSX-V exchange approval.

On August 19,2022, Coloured Ties has acquired another 46 mineral claims adjacent to the previous 62 claims from the same Vendor Group.

The lithium claims have been acquired with 100% interest to Coloured Ties for cash consideration subject to a 2% NSR that can be reduced to 1% with $1M payout at any time in the future. No work commitments, other than as required by Ministère de l'Énergie et des Resources naturelles to keep the claims current are required and this will allow the Company to await results from surrounding properties before mobilizing and expending resources to this project.

The Company will continue to monitor exploration activity and results obtained in adjoining projects and develop an exploration plan within the area. As per initial plan, Coloured Ties is compiling detailed geological data of the area. The adjoining property is owned by Winsome Resources, who have provided early technical summary of the area, which will be considered in understanding of prospects of the claims acquired by the Company. Winsome News Release regarding Mazerac Area can be found here: https://wcsecure.weblink.com.au/pdf/WR1/02480499.pdf 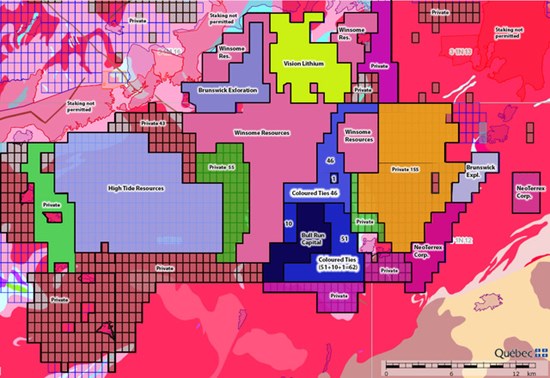 As of September 22,2022, Coloured Ties holds the following lithium assets.

-3,000,000 shares in Hertz Lithium Inc, www.hertzlithium.com Hertz is currently conducting an IPO to list on the CSE

Coloured Ties Capital is a publicly traded Canadian-based venture capital firm focused on early stage investments in companies in the junior resources and break thru and disruptive technologies. Coloured Ties investment strategy is to invest early in multiple private and public companies across a variety of sectors that merit investments to advance promising ventures globally. Coloured Ties invests early stage, in promising projects where it can be the Founding or Early Stage investor and can additionally provide investees with advisory services and access to the company's ecosystem.

Except for historical information contained herein, this news release contains forward-looking statements that involve risks and uncertainties. Actual results may differ materially. Except as required pursuant to applicable securities laws, the Company will not update these forward-looking statements to reflect events or circumstances after the date hereof. More detailed information about potential factors that could affect financial results is included in the documents filed from time to time with the Canadian securities regulatory authorities by the Company.

To view the source version of this press release, please visit https://www.newsfilecorp.com/release/138076

Sign up to receive news releases by email for Coloured Ties Capital Inc. or all companies belonging to the Transportation/Trucking/Railroads, Technology, Banking/Financial Services, Mining and Metals industries.