Toronto, Ontario--(Newsfile Corp. - August 15, 2022) - Premium Nickel Resources Ltd. (TSXV: PNRL) (formerly, North American Nickel Inc.) ("Premium Nickel" or the "Company") is pleased to announce that trading in the Company's common shares (the "Common Shares") is expected to commence on the TSX Venture Exchange (the "Exchange") at market open on Wednesday, August 17, 2022 under the symbol "PNRL". The resumption of trading follows the successful closing by the Company of its previously-announced "reverse takeover" transaction (the "RTO Transaction"), which resulted in the formation of "Premium Nickel Resources Ltd."

Keith Morrison, CEO, commented: "The successful amalgamation of North American Nickel Inc. and Premium Nickel Resources Corp. is a significant development for all of our respective shareholders and stakeholders. We can now move forward with the combined financial and technical strength of both companies and focus our efforts on building value for all current and future shareholders and stakeholders. PNRL will apply a principled approach to the development of our current Ni-Cu-Co sulphide assets and continue to evaluate other opportunities in (i) countries governed by Rule-of-Law, (ii) where geological prospectivity supports the discovery of large deposits, and (iii) can be developed assuming conservative long-term commodity prices. We will prioritize the rapid re-development and modernization of our flagship asset, the past producing Selebi Ni-Cu-Co sulphide Mine in Botswana, using best practices in a manner that is inclusive of modern environmental, social and corporate governance responsibilities with a strong commitment to working with the local communities and all of the stakeholders. The resources remaining at these mines are now critical metals, required for the continued development of a decarbonized and electrified global economy."

PNRL is an intermediate global nickel-copper-cobalt company with assets in Botswana, Greenland, Canada and Morocco. The Company is currently focusing its efforts on advancing its 100% owned flagship Selebi Mine in Botswana.

The Selebi Mine is located in Botswana and consists of a single mining license covering an area of 11,504 hectares located near the town of Selebi Phikwe, approximately 150 kilometres southeast of the city of Francistown, and 410 kilometres northeast of the national capital Gaborone (figure 1). The Selebi Mine includes two shafts (Selebi and Selebi North deposits) and related infrastructure (rail, power and water). The Selebi deposit began production in 1980 and the Selebi North deposit began production in 1990. Mining terminated at both operations in 2016 due to a failure in the separate Phikwe processing facility and was subsequently placed under liquidation in 2017. Figures may be viewed using the link provided at the end of this release.

Since 2019, the PNRL technical team has been compiling and verifying information. Level plans were digitized, and after significant effort, PNRL now has a 3D model of the Selebi and Selebi North underground infrastructure. The gathering of the geological information to build a 3D model is ongoing. Information from handwritten drill logs were merged into the BCL drill hole database, and as required, historic core is being re-logged.

At the time of liquidation, South African Mineral Resource Committee (SAMREC) compliant Mineral Resources within the Selebi Mines property boundary were reported as in-situ and depleted for mining as of September 30, 2016. These historical measured and indicated mineral resources used a nickel equivalent (NiEq) cut-off grade of 0.4% and were estimated to total 17.83 Mt at grades of 0.87% Ni and 1.42% Cu containing 155,000 tonnes (t) Ni and 253,000 t Cu. Historical inferred mineral resources were estimated to total 15.34 Mt at grades of 0.71% Ni and 0.89% Cu containing 109,000 t Ni and 136,000 t Cu. The NiEq cut-off grade was based on a ratio of nickel and copper prices where NiEq = %Ni + (Cu price/Ni price)*%Cu. Nickel and copper prices used were US$8.00/lb Ni and US$3.00/lb Cu, respectively. This estimate, which has not been prepared in accordance with National Instrument 43-101 - Standards of Disclosure for Mineral Projects ("NI 43-101"), is considered to be historical in nature and should not be relied upon. However, management believes that it could be indicative of the presence of mineralization on the Selebi Mines property. A qualified person has not completed sufficient work to classify the historical mineral estimate as a current mineral resource estimate and PNRL is not treating the historical mineral estimates as current mineral resource estimate.

The highlight of the historic data compilation at Selebi was the identification of an off-hole borehole EM anomaly in sd140, a 2010 drill hole targeting down-dip of 1992 drill hole sd119 that reported an estimated true thickness interval of 38.5 metres averaging 1.58% Ni and 2.44% Cu, including 21.4 metres of 2.34% Ni and 3.39% Cu (figure 2), which management believes could be indicative of the presence of mineralization on the Selebi Mines property.

PNRL plate modeling of the EM results indicated that a conductor is located 15 metres away from sd140. Digitization of the underground infrastructure indicates that the nearest edge of the modelled plate is 110 meters from existing workings, and the sd119 intersection is approximately 300 metres from mine workings.

The review of the borehole electro-magnetic ("BHEM") geophysical data highlighted the importance of geophysical data and resulted in a program to collect additional BHEM data. Almost all of the historic holes were blocked and a program of re-opening holes began in October 2021 and is ongoing. Gyro and BHEM data has been collected in these re-opened holes. Collars of 228 holes have been located using a differential Global Positioning System (DGPS) and at another 105 sites where evidence of drilling was found, but no hole was seen. An initial downhole program of televiewer and physical property logging has also been completed to support the creation of a structural model.

This work has highlighted the potential for establishment of Mineral Resources at depth at the Selebi deposit. Selebi North mineralization is also open at depth, and additional potential to establish Mineral Resources occurs here. Given the basin structure, it is possible that the Selebi North mineralization extends at depth and flattens to the south, while also potentially extending southward.

During former operations, the ore from the Selebi and Selebi North deposits were processed at a concentrator plant and smelter located adjacent to the Project at the historical Phikwe Mine. PNRL intends to produce separate copper and nickel concentrates for commercial sale (instead of the historical bulk concentrate that was produced by BCL Limited, the liquidation trustee). In 2021, the technical team carried out due diligence work that included metallurgical sampling and testing. A preliminary metallurgical study program for separate copper and nickel concentrate production at a conceptual level was completed by SGS Canada Inc. in Lakefield, Ontario. The conceptual process flowsheet developed by SGS Canada Inc. includes the key unit operations of crushing, grinding, and flotation. Preliminary flotation test results demonstrate that nickel-copper separation is achievable, however, further representative sampling and testing is required to demonstrate that the target grades of the copper and nickel concentrates can be consistently met.

The recommended exploration program, consisting of diamond drilling, geophysics, televiewer, gyro and additional compilation is currently underway. To date, 34 historic holes have been cleaned, 30 have surveyed with BHEM and two surface holes and one wedged daughter hole have reached target depth. A total of 174 core samples have been sent for analyses at ALS Global laboratories in Randfontein, South Africa. Certified assay results are pending.

The proposed work plan for the Selebi Mine includes continued diamond drilling which is expected to be ongoing for up to 18 months, with the specific objective of delivering a PEA on the Selebi mines. During that time, additional metallurgical samples will be collected and sent for more detailed studies. The underground infrastructure at Selebi North will be upgraded to support an underground drilling program as well as improve health & safety.

The following disclosure updates the escrow information described in the Filing Statement.

Certain directors, officers and seed share shareholders of the Company are subject to escrow requirements pursuant to the Policy 5.4 - Escrow, Vendor Considerations and Resale Restrictions of the TSX Venture Exchange ("Exchange Policy 5.4"). The below information relating to escrowed securities updates the escrowed securities information outlined in the Filing Statement.

The following securities of the Company held by Principals (as defined in Exchange Policy 5.4) are subject to escrow as detailed below.

Certain "seed share resale restrictions" are applicable to the Common Shares held by non "principals" (as defined in the policies of the Exchange) of the Company. An aggregate of 26,270,911 Common Shares issued to former shareholders of Premium Nickel Resources Corporation in exchange for common shares of Premium Nickel Resources Corporation under the Transaction are expected to be subject to the seed share resale restriction matrix under Exchange Policy 5.4, with:

The scientific and technical content of this news release has been reviewed and approved by Sharon Taylor, Chief Geophysicist of the Company, who is a "qualified person" for the purposes of NI 43-101.

PNRL is a Canadian company dedicated to the exploration and development of high-quality Ni-Cu-Co resources. PNRL believes that the medium to long-term demand for these metals will continue to grow through global urbanization and the increasing replacement of internal combustion engines with electric motors. Importantly, these metals are key to a low-carbon future.

PNRL maintains a skilled team with strong financial, technical and operational expertise to take an asset from discovery to exploration to mining.

PNRL has focused its efforts on discovering world class nickel sulphide assets in jurisdictions with rule-of-law that fit a strict criteria that comply with PNRL's values and principles which stand up and surpass the highest acceptable industry standards. PNRL is committed to governance through transparent accountability and open communication within our team and our stakeholders.

On January 31, 2022, Premium Nickel Resources Corporation closed the acquisition of PNRL's flagship asset, the Selebi Mine. The Selebi Mine includes two shafts, (Selebi and Selebi North shafts) and related infrastructure (rail, power and water). Shaft sinking and plant construction started in 1970. Mining concluded in October 2016 when the operations were placed on care and maintenance due to a failure in the separate and offsite processing facility. The Selebi Mine was subsequently placed under liquidation in 2017.

The proposed work plan for the Selebi Mine includes diamond drilling which is expected to be ongoing for up to 18 months. During that time, additional metallurgical samples will be collected and sent for more detailed studies. The underground infrastructure at Selebi North will be upgraded to support an underground drilling program as well as improve health & safety.

In addition, PNRL is evaluating direct and indirect nickel asset acquisition opportunities globally, and also: (i) holds a 100% interest in the Maniitsoq property in Greenland, which is a camp-scale permitted exploration project comprising 3,048 square kilometres covering numerous high-grade nickel-copper + cobalt-sulphide occurrences associated with norite and other mafic-ultramafic intrusions of the Greenland Norite Belt; (ii) holds a 100% interest in the Post Creek/Halcyon property in Sudbury, Ontario which is strategically located adjacent to the past producing Podolsky copper-nickel-precious metal sulphide deposit of KGHM International Ltd.; (iii) holds a 100% ownership of property in the Quetico region near Thunder Bay, Ontario; and (iv) is expanding its area of exploration interest into Morocco.

Neither the Exchange nor its Regulation Services Provider (as that term is defined in the policies of the Exchange) accepts responsibility for the adequacy or accuracy of this news release. No stock exchange, securities commission or other regulatory authority has approved or disapproved the information contained herein. 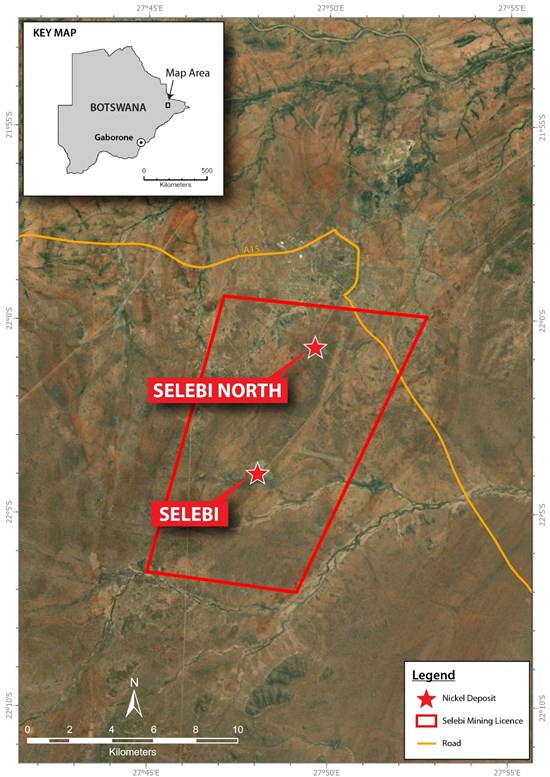 To view the source version of this press release, please visit https://www.newsfilecorp.com/release/133846

Sign up to receive news releases by email for Premium Nickel Resources Ltd. or all companies belonging to the Mining and Metals industry.