Vancouver, British Columbia--(Newsfile Corp. - August 15, 2022) - Midnight Sun Mining Corp. (TSXV: MMA) (OTCQB: MDNGF) (the "Company" or "Midnight Sun") is pleased to report all preparations have been completed and drilling has commenced on the Company's Solwezi Licences in Zambia.

Midnight Sun has contracted ATL Drilling Services Ltd. to perform the diamond drilling program previously announced by the Company (see the Company's news release dated June 14, 2022). This drill program was designed based on a review and re-interpretation of data generated by Rio Tinto Mining and Exploration Limited ("Rio Tinto") under the terms of a now terminated earn-in and joint venture agreement.

Dr. Simon Dorling, a specialist in sedimentary-hosted copper deposits, conducted the review, which included assessing the targeting rationale for the exploration work completed, evaluating the effectiveness of the work completed with regards to the proposed targeting concepts, and commenting on the remaining prospectivity of the Solwezi Licences. The review culminated in a set of drill targets that include both a new interpretation at known targets as well as newly defined targets.

Al Fabbro, President and CEO of Midnight Sun, stated, "Our Solwezi Licences are located in an area of world-class copper mines and have so far shown many of the hallmarks of such deposits. We are of the view that this revised technical approach will provide the Company with an opportunity to catapult the project to a new level."

Midnight Sun has committed to up to 4,500 metres of drilling at its Solwezi Licences for the 2022 field season. The drill meterage has been allocated to 4 targets (Figure 1) which include the known Mitu and Dumbwa prospects and two new targets at North 22 Zone and the Crunch Zone. 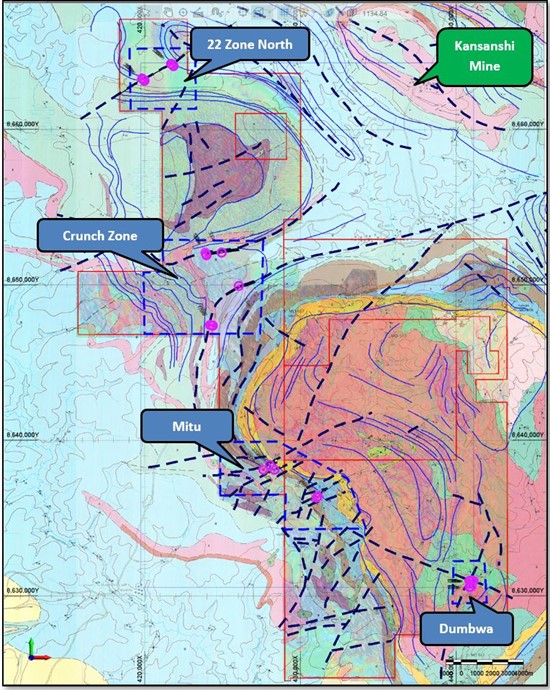 Figure 1: Geological map and planned drill holes on the Solwezi Licences as well as lineaments and trend lines interpreted from recent geophysical data.

To view an enhanced version of Figure 1, please visit:
https://images.newsfilecorp.com/files/2553/133786_figure1.jpg

The interpretation of high-resolution airborne magnetics shows multiple structures cross cutting the Solwezi Dome margin and the overlying Copperbelt sediment succession. The displacement occurs primarily along northeast trending structures which are key to mineralisation at the nearby Kansanshi Mine, owned by First Quantum Minerals. A reassessment of drill cores confirms a structural overprint on stratiform mineralisation and provides justification to revisit existing prospects including the proposal of structural corridors controlling mineralization around the Mitu area as intercepted in hole MDD-17-15 which measured 4.23% CuEq over 11.6 metres (see the Company's news release dated July 4, 2017). Five diamond drill holes have been planned for the Mitu area, targeting northeast-trending structures.

The Dumbwa Prospect is geologically located over basement rock with mineralisation which resembles that of Barrick Gold's Lumwana Mine, located approximately 60 kilometres west of Solwezi. The Dumbwa Prospect is marked by a north-south soil anomaly that extends for more than 20 kilometres. Previous drilling has intersected copper mineralisation but follow up drilling was unable to determine the source of this large anomaly. New magnetic data shows that the southern area of the Dumbwa anomaly is underlain by a major lineament and two east-west drill hole traverses totalling nine holes have been planned to target the source of the surface anomaly.

The 22 Zone North & Crunch Zone targets are concepts derived from a combination of structural interpretation, subtle geochemical anomalism, and new insights into the genesis of mineralisation in the Zambian-Congo Copperbelt. The primary objective of this drilling is to assess the structural control on mineralisation in the area. The selected locations show apparent structural displacements of several hundreds of meters and are oriented in a favourable direction for fluid flow during compressional deformation, potentially leading to areas which trap and concentrate copper-bearing fluids.

Qualified Person: Richard Mazur, P.Geo., a Director of the Company and a Qualified Person under NI 43-101, has reviewed and approved the technical data and contents of this release.

The Company has extended the investor relation services agreement with Kaye Wynn Consulting Inc. ("Kaye Wynn"). Kaye Wynn has been engaged for an additional one year period at a rate of $3,000 (plus GST) per month. The Company will also grant Kaye Wynn stock options to purchase 350,000 Common Shares at an exercise price of $0.165 per share for the term of their engagement. The stock options shall vest in accordance with TSX Venture Exchange policies relating to the granting and vesting of Investor Relations Stock Options. The options are granted pursuant to the Company's Stock Option Plan and the contract may be cancelled by either party with 30 days' notice.

Additionally, Midnight Sun has granted stock options to purchase an aggregate of 3,300,000 Common Shares of the Company, at an exercise price of $0.165 per share, to certain directors, officers, employees, and consultants. The stock options are granted pursuant to Midnight Sun's 10% rolling stock option plan, are fully vested upon issuance, and shall expire five years from the date of issue.

ON BEHALF OF THE BOARD OF MIDNIGHT SUN MINING CORP.

To view the source version of this press release, please visit https://www.newsfilecorp.com/release/133786

Sign up to receive news releases by email for Midnight Sun Mining Corp. or all companies belonging to the Mining and Metals industry.