Kelowna, British Columbia--(Newsfile Corp. - August 10, 2022) - Fission 3.0 Corp. (TSXV: FUU) (OTCQB: FISOF) ("Fission 3" or "the Company") is pleased to report that the first significant anomalous radioactive mineralization has been discovered in drill hole ML22-006, at its 100%-owned Murphy Lake project in Canada's Athabasca Basin. The drill hole is still in progress at 509 m as up to 2 m wide graphite and sulphide rich brittle faults continue to be encountered. It is the first drill hole of the expanded Murphy Lake summer drill program that commenced on August 2, 2022.

Drill hole ML22-006, which tested the E1 conductor in the prospective north trending structural corridor located in the east part of the property, has intersected a 2.0 m interval of anomalous and variable radioactivity including a 0.5 m interval with a maximum of 2300 cps, 20.9 m below the Athabasca Unconformity, occurring on the margin of a 34.5 m wide shear zone in basement rocks with graphite laminations and graphitic faults. Hole ML22-006 is located 300 m to the north of the 5 holes that were drilled in the first Murphy Lake drill program carried out in July (see August 2, 2022 Fission 3 News Release).

"We are greatly encouraged that the first significantly anomalous radioactivity has been encountered at Murphy Lake. The initial summer drilling had confirmed the north trending conductor corridor as highly prospective and these new results substantially up-grade the potential of the area. Additional drilling will follow up on this new mineralization and plans to further expand the drill program are underway."

Hole ML22-006 was collared as an angled hole reaching the unconformity at a depth of 303.1 m. The lower sandstone from ~196 m onwards becomes very friable containing very common unconsolidated sand seams. From ~250 m and below the sandstone contains sections of pervasive to fracture controlled clay alteration. Hematized and bleached granitoid occurs beneath the Athabasca unconformity at 303.1 m to a depth of ~312 m. A two-meter interval from 323.0 m to 325.0 m has yielded anomalous radioactivity greater than 420 cps with a peak of up to 2300 cps from 324.0 m to 324.5 m. This is just before the intersection of a 34.5 m wide shear zone from 326.5 m to 361.0 m characterized by ductile deformation and containing graphite laminations and graphitic faults and fractures. A 4.8 m wide graphite and sulphide rich cataclastic brittle fault zone was intersected within the shear zone from a depth of 356.7 m to 361.5 m. The drill hole is still in progress at 509 m as zones of clay and chlorite altered basement rocks continue to be intersected after the shear zone as well as several graphite and sulphide rich cataclastic brittle faults up to ~2 m in width and containing healed brecciated wall rock. (See maps at https://www.fission3corp.com/projects/athabasca-basin/ne-athabasca-basin/murphy-lake/

The Company plans to follow up these results with drill holes to test up and down dip and to continue to test the E1 conductor along strike. Also to be drill tested are the NE1 and NE2 northeast trending conductors within a 1 km long northeast trending resistivity low located in the north part of the property. The Company had been planning to drill another 4 holes for approximately 1,600 m but is now planning to further expand this current drill program.

All depth measurements reported are down-hole and true thickness are yet to be determined.

Samples from the drill core are split in half on site and are standardized at 0.5 m lengths. One half of the split sample will be submitted to SRC Geoanalytical Laboratories (an SCC ISO/IEC 17025: 2005 Accredited Facility) in Saskatoon, SK. for lithogeochemical analysis using their "Uranium Package".

Samples from Natural gamma radiation in the drill core that is reported in this news release was measured in counts per second (cps) using a handheld Radiation Solutions RS-125 scintillometer. Borehole radiometric surveys are planned in all drill holes to measure natural gamma radiation using a Mount Sopris Instruments QL40-GRA borehole gamma probe. The reader is cautioned that scintillometer readings are not directly or uniformly related to uranium grades of the rock sample measured and should be used only as a preliminary indication of the presence of radioactive materials. All depths reported of core interval measurements of radioactivity are not always representative of true thickness.

The Murphy Lake Property, which is 100%-owned by Fission 3, comprises 8 claims, within two claim blocks, totaling 609 hectares located within the eastern edge of the Athabasca Basin, Saskatchewan. The Murphy Lake property is located 30 km northwest of Orano's McLean Lake uranium mine, 5 km south of ISOEnergy's high grade Hurricane Uranium Deposit and 4.5 km east of Cameco's Larocque Lake deposit with drill intersections as high as 27.9% U3O8 over 7.0 m in drill hole Q22-040. On July 18, 2022 ISOEnergy announced the initial mineral resource estimate for the Hurricane Deposit of 48.61 million lbs of U3O8 in the indicated category based on 63,800 tonnes grading 34.5% U3O8 estimated at a uranium cut-off grade of 1.00% U3O8. 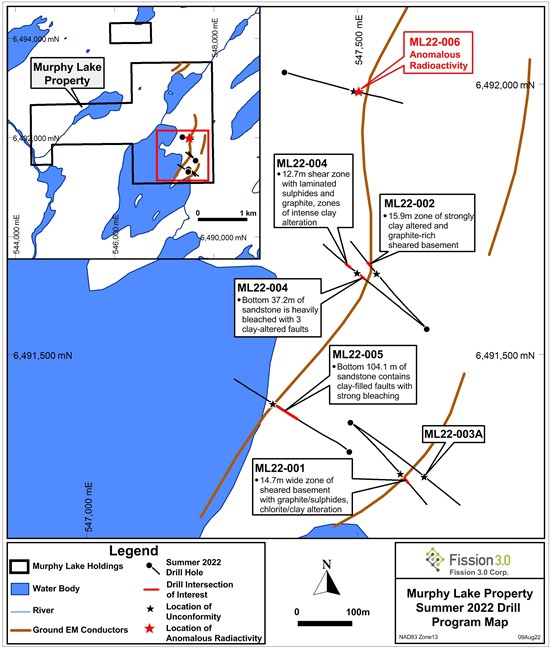 The technical information in this news release has been prepared in accordance with the Canadian regulatory requirements set out in National Instrument 43-101 and approved on behalf of the company by Raymond Ashley, P.Geo., Vice President, Exploration of Fission 3.0 Corp., a Qualified Person. Mr. Ashley has verified the data disclosed.

The TSX Venture Exchange and the Canadian Securities Exchange have not reviewed, approved or disapproved the contents of this press release, and do not accept responsibility for the adequacy or accuracy of this release.

To view the source version of this press release, please visit https://www.newsfilecorp.com/release/133353

Sign up to receive news releases by email for Fission 3.0 Corp. or all companies belonging to the Banking/Financial Services, Mining and Metals industries.