The 2022 exploration program began in mid-March 2022 and six of the eight planned holes were completed for a total of 1,155 metres drilled. Two targets remain undrilled because of warming weather conditions that exposed creeks and other wetlands, which impeded surface access. Downhole electromagnetic surveys were completed on two of the first four drill holes to better define the targeted conductors detected by ALX's 2021 airborne VTEMTM survey flown by Geotech Ltd. of Aurora, Ontario. A ground electromagnetic geophysical survey was carried out in on an undrilled target, which has provided an improved collar location for follow-up drilling.

Highlights of the 2022 Drilling Program

Nickel - The most notable nickel values occur within holes Elec22-01, Elec22-02 and Elec22-06. These results are interpreted as the peripheral geochemical expression of a much larger mineralizing system.

An increasing nickel content associated with increasing magnesium is common in basaltic komatiitic terranes, not only at Electra but worldwide. The corresponding increase in nickel values versus magnesium oxide ("MgO") trend is due to the presence of higher amounts of the silicate mineral olivine, which is rich in nickel and MgO.

However, classic magmatic net-textured sulphide concentrations, clasts and blebs are observed at approximately 108 metres in hole Elec22-02, and demonstrate that a magmatic sulphide-forming process was operative in this mineralizing system. This magmatic sulphide horizon also marks a notable break in the underlying upward-increasing nickel trend into a significant nickel depletion interval. The fact that the associated magmatic sulphides are so depleted in nickel suggests that nickel-enriched equivalents may occur elsewhere along strike or down dip from hole Elec22-02. 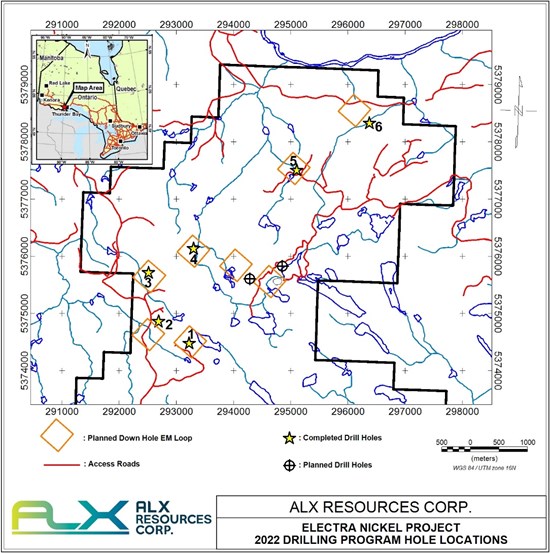 Zinc - Wide intervals of anomalous zinc concentrations occur in most of the drill holes. This and the fragmental nature of the volcano-clastic sequences suggest that this is potentially a zinc-rich volcanogenic massive sulphide ("VMS") environment. The following notable concentrations are:

Platinum and Palladium - The concentration of platinum and palladium is generally less than 15 parts per billion ("ppb"), which is representative for basaltic-komatiites from elsewhere in Canada and Australia. However, of note are the platinum and palladium values near the end of hole in Elec22-06 where a high of 121 ppb platinum and 33 ppb palladium was found in over 0.75 metres from 162 to 162.75 metres. The observation in the drill log for Elec22-06 of disseminated sulphides in the gabbroic host rock suggest that this drill hole should be followed up to a greater depth.

To view maps and photos of Electra click here

Electra is located near Thunder Bay, Ontario, in a fertile exploration district well-linked to highways, roads and trails, and lies near a powerline and the Canadian National Railroad. The Project consists of 190 cell units totaling approximately 4,066 hectares (10,047 acres) and is prospective for nickel-copper-cobalt, platinum group elements ("PGE"), and gold. ALX has the option to earn a 100% interest in Electra after fulfilling payment obligations of cash and common shares, and exploration expenditures according to the terms of an option agreement signed in December 2020 (see ALX news release dated December 31, 2020).

The Electra magmatic-sedimentary geological and geophysical environment is similar to that of other komatiite-hosted nickel sulphide terranes in Canada and Western Australia. The challenges encountered at Electra are similar to those in other komatiitic terranes; i.e., the presence of barren sedimentary and volcanogenic conductive sulphides with high background zinc concentrations.

In the late 1990's a "nickel-sulphide" geochemical vector was developed in the Kambalda nickel camp of Western Australia. The vector was formulated not to find obvious nickel sulphide mineralization that could be observed directly in drill core, but to point out stratigraphic horizons with chemical signatures suggestive of potential enhanced nickel-copper-PGE sulphide concentrations along strike. Other than obvious nickel sulphides observed and subsequently assayed from core, potential nickel sulphide horizons can remain hidden (cryptic) and only detected by the application of proven geochemical vectors. ALX continues to evaluate the outcome of the 2022 exploration program by integrating the geological, geochemical and geophysical results in order to determine the best target areas for follow-up drilling. ALX's drilling permit at Electra is good until March 2025.

QA/QC following industry best practices was incorporated into the drill core sampling and included systematic insertion of quartz blanks and certified reference materials into sample batches, as well as collection of quarter-core duplicates, at a rate of approximately 10%. All drill core samples were collected as half-split core, apart from quarter-split duplicates.

The technical information in this news release has been reviewed and approved by Dr. Larry Hulbert, D.Sc., P.Geo. who is a Qualified Person in accordance with the Canadian regulatory requirements set out in National Instrument 43-101.

ALX's mandate is to provide shareholders with multiple opportunities for discovery by exploring a portfolio of prospective mineral properties, which include uranium, nickel-copper-cobalt and gold projects. The Company uses the latest exploration technologies and holds interests in over 200,000 hectares of prospective lands in Saskatchewan, a stable Canadian jurisdiction that hosts the highest-grade uranium mines in the world, a producing gold mine, and production from base metals mines, both current and historical.

Statements in this document which are not purely historical are forward-looking statements, including any statements regarding beliefs, plans, expectations or intentions regarding the future. Forward-looking statements in this news release include: ALX's preliminary exploration results from the Company's exploration activities at the Electra Nickel Project, and any plans to undertake additional exploration activities at the Electra Nickel Project. It is important to note that the Company's actual business outcomes and exploration results could differ materially from those in such forward-looking statements. Risks and uncertainties include that ALX may not be able to fully finance exploration on its exploration projects, including drilling; our initial findings at our exploration projects may prove to be unworthy of further expenditures; commodity prices may not support further exploration expenditures; exploration programs may be delayed or changed due to any delays experienced in consultation and engagement activities with First Nations and Metis communities and the results of such consultations; and economic, competitive, governmental, societal, public health, environmental and technological factors may affect the Company's operations, markets, products and share price. Even if we explore and develop our projects, and even if nickel, uranium, gold or other metals or minerals are discovered in quantity, ALX's projects may not be commercially viable. Additional risk factors are discussed in the Company's Management Discussion and Analysis for the Year Ended March 31, 2022, which is available under the Company's SEDAR profile at www.sedar.com. Except as required by law, we will not update these forward-looking statement risk factors.

To view the source version of this press release, please visit https://www.newsfilecorp.com/release/131344