Toronto, Ontario--(Newsfile Corp. - May 19, 2022) - Benz Mining Corp. (TSXV: BZ) (ASX: BNZ) (the Company or Benz) is pleased to provide an update on its recently completed exploration activities on a 2km x 2km portion of the Southern Anomalies trend. The Southern Anomalies are a zone of strong and extensive VTEM anomalies identified during the survey flown in 2005. Located 3.5km south of the Eastmain Mine portal, the anomalies belong to an area of the greenstone belt previously mapped as volcanics in a zone covered by glacial till. 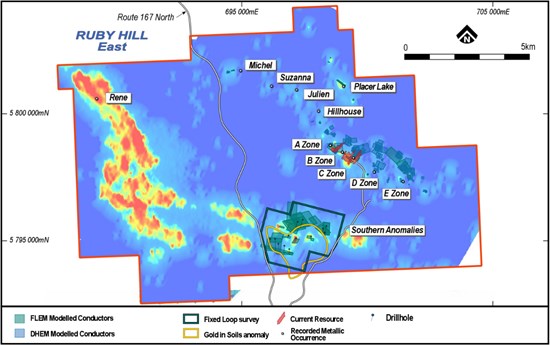 "The Southern Anomalies FLEM conductors are significant on multiple levels:

"Our drill program intersected multiple horizons of sulphide (pyrrhotite, pyrite) mineralization, some with associated quartz veining and as dissemination, veins and bands. We also hit a significant amount of polygenic and monogenic conglomerates with sulphide mineralization and silicification highlighted by the presence of tourmaline, carbonate and sericite. We do not know yet how significant those results will be, and we are eagerly waiting for the analytical results.

"Benz continues to systematically explore the region, combining technology and lateral thinking to unlock all the value an underexplored greenstone belt has to offer. The list is lengthening by the day, several gold discoveries along strike of the Eastmain deposit, a lithium pegmatite discovery at Ruby Hill West, and multiple geophysical and geochemical anomalies yet to be tested.

"We don't know what the future holds for Benz but judging from the past 18 months, it's pretty safe to say that more discoveries await." 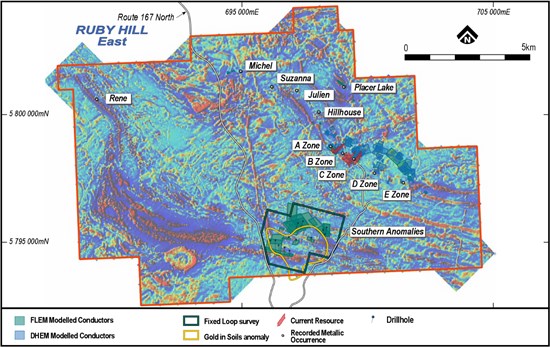 The ground survey was conducted between January 25th and February 9th 2022 and consists of 49.10 line-km of TDEM data acquired from a single surface loop. Acquisition and interpretation were completed by TMC geophysics and results were received at the end of February.

The EM anomalies defining six of the seven interpreted conductor axes were modelled. Each anomaly was then modelled by a single conductor in the form of a thin plate having its location and main attributes optimized to the associated survey's line data (line to line analysis). 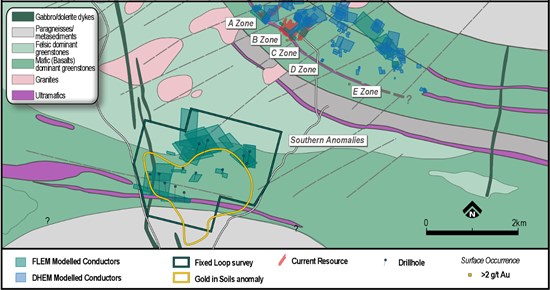 There are three main sub-parallel anomalous corridors oriented about N110°:

North Horizon: The latter is characterized by the axes STDEM-1 and STDEM-3 which are interpreted to outline the same anomalous horizon/trend locally interrupted over 300 m when crosscut by NNE striking faults. The associated conductive source(s) appear(s) better defined beneath 100 m of vertical depth and are relatively continuous with moderate apparent dips to the north northeast. 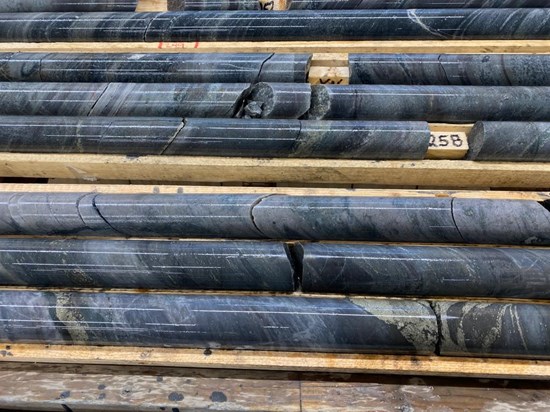 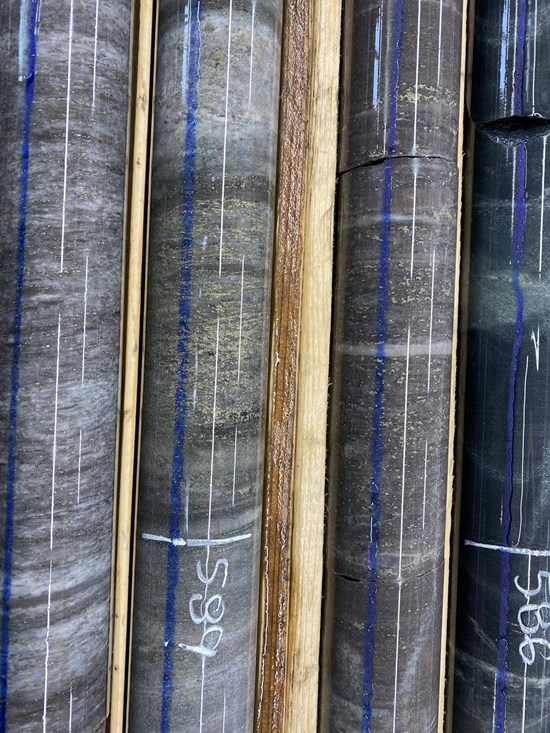 Central Horizon: In the middle part of the grid, the axes STDEM-2, STDEM-4, STDEM-5 and STDEM-6 emphasizing a group of conductors with limited continuities and that may have developed within the same anomalous horizon. The associated conductive sources are relatively small and with moderate apparent dips to the north northeast.

South Horizon: The axis of anomaly STDEM-7 highlights a very continuous conductor, laterally and at depth, with moderate apparent dips to the north northeast. The associated conductive target, or group of closely spaced conductive sources, is deeply seated, and lies immediately to the north of a thick highly magnetic band of rocks. The western modelled plates are coincident with a deep-seated mag feature that may represent an intrusion.

A winter drill campaign was planned to explain these conductors. Once all the required permits were obtained, drilling started on the 16th of March 2022 and ended on 14th of May 2022.

The main geological units encountered were various metasediments, from conglomerates to quartzites intruded by ultramafic to mafic intrusions. Within the metasediments large zones of alteration with disseminated and veins of sulphides were observed. Sulphide exhalites were intersected in several holes explaining some of the conductors.

In the Southern STDEM -7 anomalies, ultramafic rocks are more abundant and are locally sulphide bearing and strongly altered and sheared. They also intrude a sedimentary sequence with local sulphides, alteration and some exhalite bands. Volcanic rocks were rarely intersected. 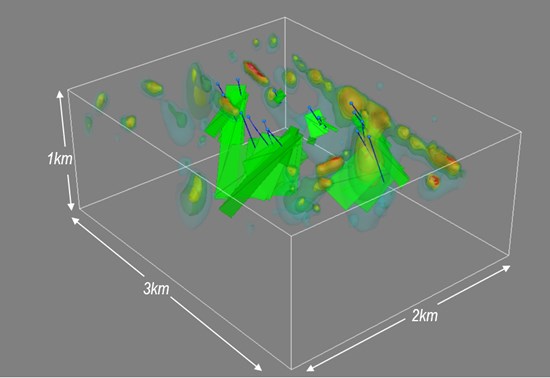 The Eastmain Gold Project, situated on the Upper Eastmain Greenstone Belt in Quebec, Canada, currently hosts a NI 43-101 and JORC (2012) compliant resource of 376,000oz at 7.9gpt gold (Indicated: 236,500oz at 8.2gpt gold, Inferred: 139,300oz at 7.5gpt gold). The existing gold mineralisation is associated with 15-20% semi-massive to massive pyrrhotite, pyrite and chalcopyrite in highly deformed and altered rocks making it amenable to detection using electromagnetic techniques. Multiple gold occurrences have been identified by previous explorers over a 12km long zone along strike from the Eastmain Mine with very limited but highly encouraging testing outside the existing resource area.

The Ruby Hill West Lithium project is a surface occurrence of spodumene bearing pegmatite within the Ruby Hill West project, located 50km due west of the Eastmain exploration camp. The occurrence was first sampled in 2016 by Eastmain Resources and then by Quebec government geologists in 2018. Only limited sampling was conducted by both groups.

This press release was prepared under supervision and approved by Dr. Danielle Giovenazzo, P.Geo, acting as Benz's qualified person under National Instrument 43-101. 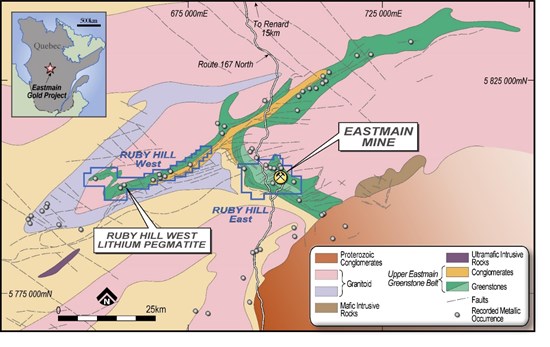 Benz Mining Corp. (TSXV: BZ) (ASX: BNZ) brings together an experienced team of geoscientists and finance professionals with a focused strategy to unlock the immense mineral potential of the Upper Eastmain Greenstone Belt in Northern Quebec, which is prospective for gold, lithium, nickel, copper and other high-value minerals. Benz is earning a 100% interest in the former producing high grade Eastmain gold mine, Ruby Hill West and Ruby Hill East projects in Quebec and owns 100% of the Windy Mountain project.

*Tr: reported as traces, the sulphide specie is present in the interval but in quantities too small to be accurately estimated. Traces is commonly accepted as being below 0.1% to 0.2%

To view the source version of this press release, please visit https://www.newsfilecorp.com/release/124613