Kelowna, British Columbia--(Newsfile Corp. - April 25, 2022) - FISSION 3.0 CORP (TSXV: FUU) (OTCQB: FISOF) ("Fission 3" or "the Company") is pleased to report that drilling and ground geophysics at the Hearty Bay project in the Saskatchewan Athabasca region, in the main up-ice direction from the historic high-grade uranium boulder trains on Isle Brochet, has intersected a hydrothermally clay-altered fault zone in hole HB-22-008 at the SW end of a new conductor. This is encouraging as uranium mineralization in the Athabasca basin is often found in proximity to clay-altered and conductive fault zones and this new conductor is a promising target for future drilling.

Highlights of the drilling and geophysics program are as follows:

The objective of the drill program was to test interpreted structural features and sandstone outliers based on the 2019 marine seismic survey in the main up-ice direction from the historic high-grade uranium boulder trains on Isle Brochet and beyond the known edge of the Athabasca Basin. While no sandstone outliers were identified, holes HB22-005 and HB22-008 intersected a 3m zone and an 11.5m zone respectively of brecciated and faulted basement rocks with hydrothermal clay alteration. The significant fault zone from 74.5m to 86m in hole HB22-008 is comprised of a 1.6m clay-supported cataclasite breccia immediately followed by clay, quartz and calcite occurring in fractures and smaller scale faults. This is encouraging as uranium mineralization in the Athabasca Basin is often found in proximity to hydrothermal clay-altered fault zones.

Hole HB22-008 is furthest to the NE from the high-grade uranium boulder trains on Isle Brochet in the main up-ice direction which supports that future drilling to discover the source of the uraniferous boulder field should continue in this direction.

The ground EM survey has identified previously unknown NE-trending basement conductors to the NE of Isle Brochet. Drill hole HB22-008 is located at the SW end of these new 2km-long subparallel conductors, pointing to a possible association with the encouraging hydrothermally altered fault and providing additional support for future drilling to proceed further to the NE along and targeting these new conductors. 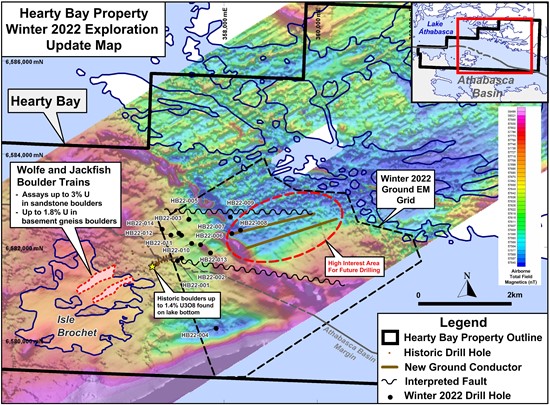 About Hearty Bay:
The Hearty Bay property comprising 7 contiguous mineral claims with an area of 11,173 ha. is located on the north edge of the Athabasca Basin, 20 km west of the Fond-du-Lac uranium deposit and 60 km east of the Beaver Lodge uranium district. The property surrounds the historic Isle Brochet high-grade boulder field, consisting of the Wolfe and Jackfish 1 km long dispersal trains trending in a down-ice direction and containing reported historic assay values up to 3.54% uranium. Approximately 600m to the northeast on the lake bottom a group of radioactive boulders were discovered reported to contain up to 1.4% U3O8. These boulders were both sandstone and altered basement rocks which was interpreted to indicate that the mineralized source was at or near the unconformity. Historic drilling by Eldorado proximal to these boulders at the margin of the Athabasca Basin did not intersect any significant radioactivity, and thus the source remains undetermined.

Prospecting work conducted by Fission 3 in 2019 on the historic Wolfe and Jackfish boulder fields at Isle Brochet has identified and sampled 45 new occurrences of mineralized sandstone and basal conglomerate boulders, returning radioactivity readings between 190 to >10,000 cps and assay values ranging from 0.07% to 8.23% U3O8. Over 24% of the boulders returned assay values of >1% U3O8 with an average of 3.06% U3O8. The sandstone and conglomerate lithologies suggests the source originates at or near the Athabasca Sandstone - Basement unconformity, and likely nearby. Additionally, historic records report the occurrence of mineralized basement and sandstone lithologies in the boulder fields. This strongly suggests that the Athabasca Basin margin represents a high-priority focus for exploration for source.

A 255km marine seismic survey was conducted by the company to the NE of Isle Brochet in the main up-ice direction. Interpretations suggested several potential drill targets consisting of possible sandstone outliers bounded by basement structural features to the northeast and further up ice from where the historic Eldorado drilling was focused.

A 2,490 line km high resolution magnetic and radiometric airborne geophysical survey was flown in 2021 and several new geologic structures were interpreted from the data.

Traction Uranium Corp. has the option to acquire up to a 70% interest in the Hearty Bay Project and it funded the winter 2022 ground geophysics and drilling program. (See Dec 10, 2021 F3.0 news release.)

Qualified Person
The technical information in this news release has been prepared in accordance with the Canadian regulatory requirements set out in National Instrument 43-101 and reviewed on behalf of the company by Raymond Ashley, P.Geo., Vice President, Exploration of Fission 3.0 Corp., a qualified person.

To view the source version of this press release, please visit https://www.newsfilecorp.com/release/121501

Sign up to receive news releases by email for Fission 3.0 Corp. or all companies belonging to the Banking/Financial Services, Mining and Metals industries.