Chris Lotito, CEO of EXLA Resources stated: "We have been working tirelessly on this transformational acquisition for some time and we thank shareholders for their patience. The acquisition gives us a strategic position in a well-established mining jurisdiction with excellent mining infrastructure. The project is drill ready with a number of high-priority targets and we look forward to updating shareholders as we advance the project." 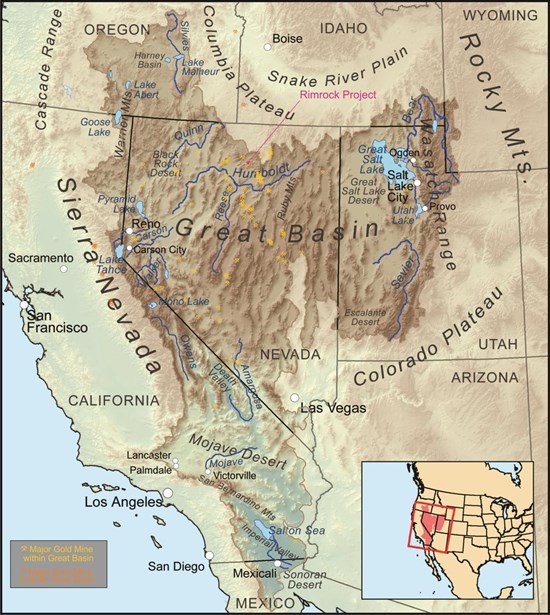 Location of the RimRock Gold Project

About the Rimrock Gold Project

The Rimrock Gold Project comprises 133 unpatented lode claims that cover an area of 2,722.56 acres. The Property is proximal to two of Hecla Mining Company's gold-silver mines that are currently on Care and Maintenance but are being further explored by drilling. 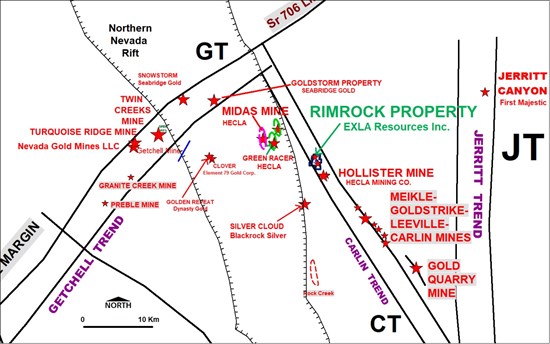 Figure 2: Proximity of the RimRock Project to other gold deposits

The previous operator of the project has already defined five high-priority targets (Figure 3): 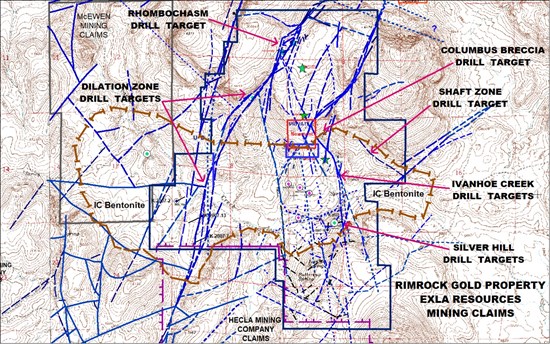 A large fault jog is present; termed the "Rhombochasm" zone. This is over 200 meters wide and 1 km long, forming a major structural target for gold-silver mineralization. A small mercury prospect sits directly atop Rhombochasm, similar in nature to the mercury prospect that sat atop the Hollister Mine, which had high-grade epithermal gold below, at a mining centroid elevation of 1,550 metres.

Recent mapping completed in the summer of 2021 by the previous operator identified additional silicification 400 meters to the southwest from the end of the previous mapping, becoming gradually weaker and replaced by quartz-sericite-pyrite mineralization and eventually aerially extensive argillic alteration.

Previous shallow drilling completed in 2007 identified elevated gold mineralization (to 187 ppb) hosted in volcanic tuff, within this zone. Multi-elemental analyses indicate the gold interval is also elevated with respect to sulfur, selenium, arsenic, antimony, tungsten and molybdenum. To a lesser degree barium and rhenium are elevated. These results are indicative of Midas Style precious metals mineralization is extant in this area.

The Ivanhoe Creek Target, located in the southeast portion of the Property, contains two large NNW-trending uplifted host fault blocks that were believed to have been re-activated at the time of the Carlin style mineralization in the region.

This mineralization could conceivably be a silver-rich halo above Carlin-style gold mineralization at further depth, along the periphery of the Eocene Hatter granitic stock system. Additional Miocene low-sulfidation Midas-style gold-silver mineralization appears to be present based on geochemical sampling. Overlapping mineral events increase the prospectivity of the system.

The Silver Hill Target is a north-northwest oriented 4 km long zone of discontinuous silicic alteration of volcanic tuff and tuffaceous lithologies that is 100 to possibly 600 metres wide. Anomalous arsenic values were found locally along the trace of this structural system.

The widest portions of significant alteration are found at the south end in the vicinity of Silver Hill, an area underlain by high grade silver mineralization (to 262 ppm) intersected in the 2007 drill program. It extends to the north-northwest where it intersects to IC Fault system at Rhombochasm.

The Shaft Zone Target is a west-northwest trending faulted zone on the southwestern margin of a large flow dome of the Columbus Rhyolite (14.92 Ma) that contains a 19-metre-deep shaft developed in mercury-mineralized silicification. It is host to a widespread area of mixed silicification, quartz-sericite-pyrite and argillic alteration. It starts roughly 400 meters east of the Silver Hill Target and continues at least 670 meters to the southeast of the shaft.

Mineralization here is discontinues and mostly covered by cobble and boulder colluvium derived from the Columbus Rhyolite Porphyry. Silicification is principally chalcedonic replacement of tuff units, often associated with a halo of quartz-sericite-pyrite and argillic alteration.

The Columbus Breccia Target is located in the northeastern part of the Rimrock Property. It contains a brecciated zone that cuts flow domes of Columbus Rhyolite, with silica and mercury-silica mineralization locally filling fractures and breccias, and again to the north where it eventually intersects and alters a large area of the basal units of the Rhyolite Porphyry.

In addition to the gold-silver target areas, a large-size 5 by 1.7 km area occurrence of bentonite is covered in part by the central portion of the Rimrock claims, that overlies the gold-silver bearing strata. The bentonitization may have formed from hydrothermal alteration from the epithermal, low-sulfidation fluid system. Bulk sampling of this deposit took place in the 1980s, and Halliburton examined the occurrence in the late 2000s. Recent interest has been shown in this large deposit by outside parties.

EXLA is acquiring 100% of the Rimrock Gold Project from CAT Strategic Metals Corporation (CSE: CAT) for total consideration of US$1.2 million. The consideration will be satisfied through the issue of 110,000,000 shares in EXLA and US$125,000 in cash. The cash contribution shall be satisfied in two instalments with US$25,000 that was paid on completion of this agreement and US$100,000 paid within sixty days of the execution of this agreement.

One hundred percent of the underlying property was optioned from the Redfern family and from Soloro Cobalt and Gold Corporation, which retain a two percent (2%) Net Smelter Royalty ("NSR") on their respective claims in the Property. This royalty can be purchased by EXLA for one million U.S. dollars (US$1,000,000) per percent NSR from the Redferns. Sale of the Soloro 2% NSR royalty on its 23 claims in the central part of the property is negotiable.

This release includes "forward-looking statements" within the meaning of Section 27A of the Securities Act of 1933, as amended, and Section 21E of the Securities Exchange Act of 1934. Such statements include any that may predict, forecast, indicate, or imply future results, performance or achievements, and may contain the words "estimate", "project", "intend", "forecast", "anticipate", "plan", "planning", "expect", "believe", "likely", "should", "could", "would", "may" or similar words or expressions. Such statements are not guarantees of future performance and are subject to risks and uncertainties that could cause the company's actual results and financial position to differ materially from those in such statements, which involve risks and uncertainties, including those relating to the Company's ability to grow. Actual results may differ materially from those predicted and any reported should not be considered an indication of future performance. Potential risks and uncertainties include the Company's operating history and resources, together with all usual and common economic, competitive, and equity market conditions / risks.

To view the source version of this press release, please visit https://www.newsfilecorp.com/release/119141

Sign up to receive news releases by email for EXLA Resources, Inc. or all companies belonging to the Mining and Metals industry.