US Senator Cynthia Lummis (R-Wyoming) to Speak at BTC Miami

Miami, Florida--(Newsfile Corp. - March 29, 2022) - It has been confirmed that Bitcoin-famous, Wyoming state republican party US Senator Cynthia Lummis will be in attendance as a speaker at this year's Bitcoin Miami. The massive Bitcoin 2022 experience has quite an A-List of speakers this year for the 4 day experience that will get underway on April 6, sitting in the midst of the annual Bitcoin week. 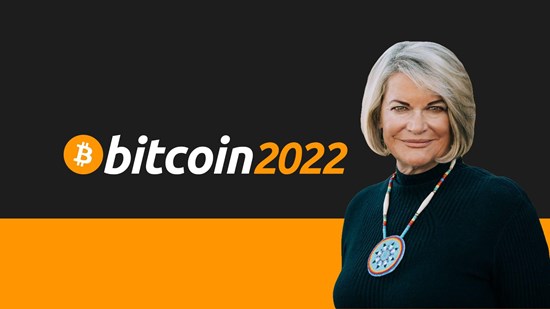 Senator Lummis will be delivering her thoughts and ideas on Bitcoin to conference-goers, anticipated to be upwards of 30,000 at peak times this year. The down-to-earth, always-caught-smiling Wyoming state senator was the first member of the US senate to invest in Bitcoin, doing so and sharing with fellow senators, the press and public. Senator Lummis will be amongst other high profile speakers and will collectively join together to captivate event attendees who will be shuffling into the beautiful Miami Convention Center located downtown in the heart of the Atlantic Ocean-neighboring seaside Florida city.

Senator Cynthia Lummis is credited with being the sole Bitcoin supporter and advocate in the nation's senate for quite some time before being joined in the ranks by 1 or 2 others. Not only was she the first documented US state senator to purchase Bitcoin in 2021, but before that time and much more since, has been a clear pro-Bitcoin voice on Capitol Hill.

As recently as December the warmly-received politician made global headlines when it was reported that Senator Lummis was working to fully integrate Bitcoin into the US financial system. In just a few short months since becoming the Bitcoin-protecting and advocating US state senator, help has come in the form of additional United States policy makers stepping up and speaking on the topic as well.

Senator Lummis will be joined by many other dynamic Bitcoin-embracing speakers who do their own share of amazing things for our collective world and Bitcoin innovation. Other notable world-famous personalities like Jordan Peterson will grace the stage of BTC Miami. The Canadian clinical psychologist, best-selling author, and businessman has been hot on the Bitcoin topic on his JBP YouTube video blog channel currently hosting almost 5 million subscribers.

Another big name at BTC Miami, amongst other big names, is none other than El Salvador President Nayib Bukele. The young national leader was the first in the world to publicly declare Bitcoin to be the legal tender of a sovereign country. Virginia-based businessman and Microstrategy CEO, Michael Saylor is also scheduled to be in attendance and speaking at the high-profile Bitcoin extravaganza also. Tickets are on sale on the decentralized web. All ticket sales purchased in exchange for Bitcoin are up to 33% off.

BTC Miami will be held from April 6 - 9 at the Miami convention center. This year's experience features Industry day immediately upon kick-off on Day 1. Industry day features events and experiences that are centered around things relevant to individuals in the Bitcoin industry in one way or another. The next 2 days are the main conference where speakers go forward and plenty of other informative and enriching materials will be shared with the tens of thousands expected.

On the final day the Sound Money Fest will feature DJ Aoki, DeadMau5, Logic, Run the Jewels, CL and many more to round out the 16 confirmed acts thus far. Flexible ticket options are available and range from isolated tickets for things like the Sound Money Fest, or inclusive packages with amazing perks and amenities like private golf cart rides for the entire length of the conference, meals, bottled water, VIP seating, to highlight a few. For the Bitcoin whale there is that fully developed whale package available. Tickets can be purchased online at any point. They are expected to go up as the event gets closer to the scheduled date.

To view the source version of this press release, please visit https://www.newsfilecorp.com/release/118547