Singapore City, Singapore--(Newsfile Corp. - March 28, 2022) - Swingby Network has launched the Skypools Bitcoin-ETH swap-bridge hybrid live for public use. The Skypools swap-bridge allows traders to easily swap between BTC and the Ethereum network coins which are built, deployed and traded on the ERC20 blockchain environment.

Swingby network users were already using the Skybridge protocol, which is the fundamental development of the network. Until now Skybridge has enabled Swingby network users to swap between forms of Bitcoin and wrapped Bitcoin, specifically WBTC on the EVM network, an ethereum-based version of Bitcoin, and the Binance-pegged BTCB coin as another form of Bitcoin. Now Skypools builds upon this to enable the seamless trading of these different forms of Bitcoin interchangeably with ERC20 network cryptocurrency tokens. 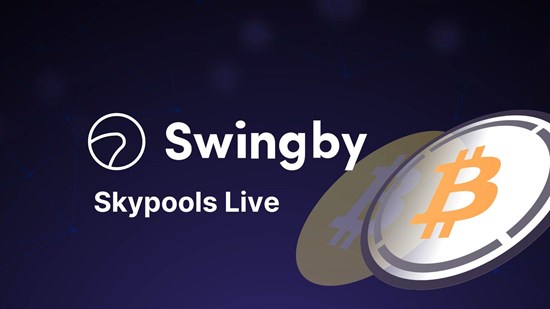 What makes Swingby network different from other swaps

The Swingby network is a truly decentralized system through and through. Swingby works by connecting platform users who wish to swap, with the liquidity reflected real-time on large AMM aggregators such as the Balancer and Sushi DeFi networks. Users never lose custody of their tokens, as no third-parties requiring such are ever included in the process.

The uniqueness of alternate forms of BTC and many listed ERC20 network coins being interchangeably tradable is big enough news in and of itself. BTC and ERC20 will be able to be swapped across blockchain networks at an extremely low cost and almost no price fluctuations across platforms. The Skypools concept was an organic idea that is currently coming into full bloom, almost ready for its public release.

Swingby network's Skypools platform could be a model for the future

One certain motivation for fundamental development work done to build the first version of the Swingby network cross-chain BTC swap was the belief that Bitcoin and then other digital currencies like ETH, would soon be used in broader financial applications. The idea is that as banks, financial institutions, corporations and even governments begin to rely on the Bitcoin and Ethereum networks to send and receive digital payments, there will be the need for networks in place which allow seamless transfer across different blockchain networks. Skypools represents such a network, also having the potential to scale as the power of the blockchain network organically expands.

Most cryptocurrency traders already comprehend that while Bitcoin is obviously always Bitcoin, in order to send BTC from one blockchain network to another it has to go through a cross-chain swap. The transfer is performed on the back end by converting the currency from a cryptocurrency coin on one digital channel to an entirely different blockchain. The technology required for cross-chain swap capability to proceed forward is included in the complex Skypools stack protocol development. Nodes on the Swingby network are independent validators and offer heightened security measures. Nodes need to agree, or reach consensus on the independent validation done by each node individually before proceeding forward with a proposed transaction presented along the chain.

The latest news prior to launch of Skypools had been news of Skybridge transitioning from a team-run DeFi project to a DAO, community-directed project. In a DAO system the community decides in many ways, how the project moves forward. The structure is held up by votes, as token holders have the ability to influence project direction collectively according to varying metrics such as percentage of the token supply held.

The launch of Skypools signifies the next step for the Swingby network which set out with this vision initially over 3 years ago and can now see what was only thought about at first, now come into fruition after years of intense work and development. The DAO project Swingby takes the fundamental tech platform Skybridge a step forward into a hybrid, multi-functional cross-chain swap-bridge connecting global users to swap between BTC, wrapped and unwrapped forms, and ERC20 network coins. New users are anticipated to learn about the existence of a BTC-WBTC-BTCB-ERC20 cross-chain swap-bridge hybrid and begin using it to benefit from the seamless swapping. Skybridge's latest news and information can be followed through social media and telegram channels.

To view the source version of this press release, please visit https://www.newsfilecorp.com/release/118432