Belo Horizonte, Brazil--(Newsfile Corp. - March 2, 2022) - Brazil Minerals, Inc. (OTCQB: BMIX) (the "Company" or "Brazil Minerals"), the Strategic Mineral Resources Company for the Green Energy Revolution, is pleased to announce continued progress in its hard-rock lithium project located in the northern region of the state of Minas Gerais in Brazil.

Brazil Minerals' Minas Gerais Lithium Project (the "Project") consists of 44 mineral rights spread over 45,456 acres (184 km2). It is predominantly located within the Brazilian Eastern Pegmatitic Province which has been surveyed by the Geological Survey of Brazil and is known for the presence of hard rock formations known as pegmatites which contain lithium-bearing minerals such as spodumene and petalite. Generally, lithium derived from pegmatites is less costly to purify for uses in high technology applications than lithium obtained from brine. Such applications include the battery supply chain for electric vehicles, an area of expected high growth for the next several decades.

The Project is overseen by two geologists who are "qualified persons" for lithium within the meaning of such term set forth in Regulation S-K 1300. Such geology team has identified in the Project at least two defined and distinct mineralized ore bodies, both containing spodumene, a lithium-bearing mineral. Photos of such spodumene intersections are included in this release. Geochemical analysis at an independent laboratory of spodumene samples has now indicated the presence of bands of lithium mineralization at concentrations that hold promise for potential economic exploration. Given these preliminary results, the Company, in parallel with continued exploration of new targets and quantification of its deposits, will initiate metallurgical studies which will include a spodumene processing route for a commercial product. 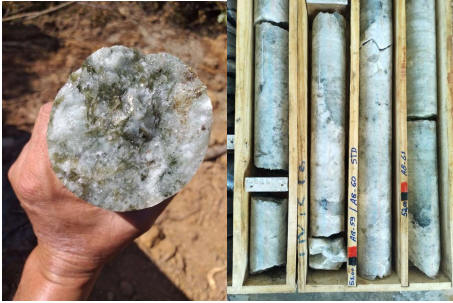 To view an enhanced version of Figure 1, please visit:
https://orders.newsfilecorp.com/files/6706/115352_brazil2.jpg

Brazil Minerals, Inc. (OTCQB: BMIX) is primarily a lithium exploration company with projects in other highly strategic minerals such as rare earths, graphite, titanium, nickel, and cobalt. In addition, Brazil Minerals owns equity stakes in both Apollo Resources Corporation, a private company developing its first iron mine, and Jupiter Gold Corporation (OTCQB: JUPGF), a listed company developing a quartzite mine and advancing two gold projects. Follow us on Twitter: @BMIXstock.

This press release contains forward-looking statements made under the "safe harbor" provisions of the U.S. Private Securities Litigation Reform Act of 1995. Forward looking statements are based upon the current plans, estimates and projections of Brazil Minerals, Inc.'s management and are subject to risks and uncertainties, which could cause actual results to differ from the forward- looking statements. Such statements include, among others, those concerning market and industry segment growth and demand and acceptance of new and existing products; any projections of production, reserves, sales, earnings, revenue, margins or other financial items; any statements of the plans, strategies and objectives of management for future operations; any statements regarding future economic conditions or performance; uncertainties related to conducting business in Brazil, as well as all assumptions, expectations, predictions, intentions or beliefs about future events. Therefore, you should not place undue reliance on these forward-looking statements. The following factors, among others, could cause actual results to differ from those set forth in the forward-looking statements: results from ongoing geotechnical analysis of the projects operated by the Company and its subsidiaries, business conditions in Brazil, general economic conditions, geopolitical events and regulatory changes, availability of capital, Brazil Minerals, Inc.'s ability to maintain its competitive position and dependence on key management.

We advise U.S. investors that Brazil Minerals' (and its subsidiaries') properties and projects, as of now, are exploratory and do not have measured "reserves" as such term is defined by the Securities and Exchange Commission. Additional risks related to the Company and its subsidiaries are more fully discussed in the section entitled "Risk Factors" in the Company's Annual Report on Form 10-K for the year ended December 31, 2020, as well as discussions of potential risks, uncertainties, and other important factors in the Company's other filings with the Securities and Exchange Commission. In addition, any forward-looking statements represent the Company's views only as of today and should not be relied upon as representing its views as of any subsequent date. The Company explicitly disclaims any obligation to update any forward-looking statements.

To view the source version of this press release, please visit https://www.newsfilecorp.com/release/115352

Sign up to receive news releases by email for Atlas Lithium Corporation or all companies belonging to the Mining and Metals, Precious Metals industries.