Silver Bullet Mines Corp. Commences Extraction of Mineralized Material at Its Buckeye Silver Mine in Arizona

Burlington, Ontario--(Newsfile Corp. - January 27, 2022) - Silver Bullet Mines Corp. (TSXV: SBMI) ('SBMI' or 'the Company') announces it has begun extracting mineralized material from its Buckeye Silver Mine in Arizona after taking delivery of its first shipment of blasting powder. SBMI's intention is to produce an initial total of 10,000 tonnes of mineralized material at a rate of 125 tonnes per day.

SBMI also announces it has been invited by the TMX Group to ring the bell at market open on Monday, January 31st at 9:30 am Eastern Standard Time, a rare honour for a new junior mining company. 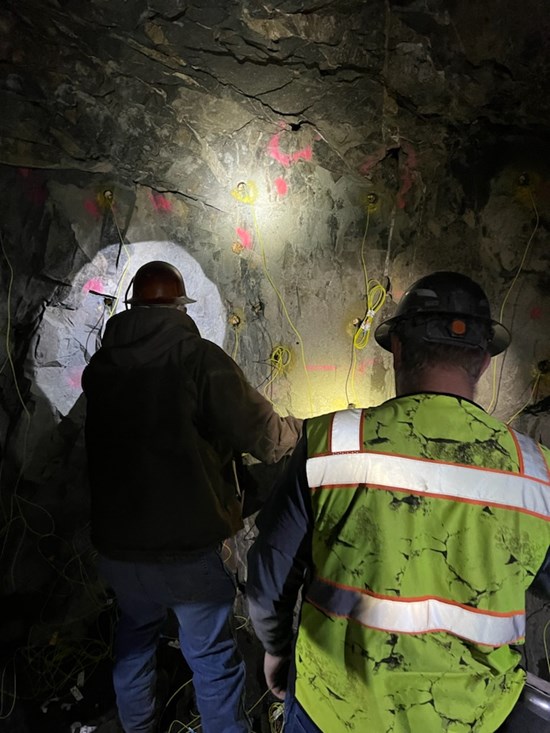 Blasting underground in January, 2022 at the Buckeye Silver Mine

SBMI's initial target is the high-grade silver zone identified in 1976 by K.C. Delise, a Registered Geologist, in a report titled Surface/Underground Mapping and Sampling. Accompanying the report was a Mine Shaft Survey dated October 23, 1976 prepared by him for International Resources and Minerals Development Company. In his report he mapped and identified this zone as extending approximately 500 feet along strike.

The Company has found a summary of assay results from 1976 and 1977 from Clarkson Labs of San Diego, CA. SBMI believes these resulted from samples taken by Delise in his 1976 field work at the Buckeye. These assays returned spectacularly high values for gold, silver and copper. The highest value for gold was 4.8 opt, for silver was 8,970 opt, and for copper was 30.7%.

This information is historical in nature and pre-dates NI43-101. SBMI does not know the methods by which such work was carried out, or whether all or part of it was under the supervision of a Qualified Person, as that term is defined in NI43-101. SBMI refers to such data and observations to inform its knowledge of the area.

Nick Barr, one of SBMI's consulting geologists, carried out his own analysis of Delise's work in 2015, as part of which he produced notes, sections and longitudinals. He also plotted the 1976 Clarkson Labs assay results noted above onto Mr. Delise's original Mining Shaft Survey. In addition to Delise's and other historical records, SBMI is also relying upon these documents created by Mr. Barr as well as his current first-hand experience at the Buckeye.

"This is a significant accomplishment", said SBMI's VP Mining, Mr. Ron Murphy. "We have completed the rehabilitation of the underground and have commenced mining as we blast into what we believe to be Delise's documented high-grade zone. The training, experience and talent of our seasoned mining crew has allowed us to achieve these goals in a short period of time."

As previously disclosed, SBMI's assay lab on-site in Arizona is managed by Robert Budd, a Metallurgical Process Engineer who began his career in metallurgical engineering in 1972. He has held various positions with various employers including Senior Engineer, Superintendent, Engineer, Technical Assistant, Technician, and Lab Assistant. Most recently, prior to joining SBMI he was involved in designing and creating an internal assay facility in Arizona for Freeport McMorran Inc. Working with Mr. Budd in SBMI's assay facility is Vic Power, a Registered Professional Assayer for the state of Arizona. Mr. Budd and Mr. Power will ensure all QA/QC practices will be adhered to, including sending samples from each run to an independent accredited lab for corroboration.

It is intended the state-of-the-art gravity pilot plant should be ready to commence the processing of mineralized material in approximately sixty days, depending on the timing of delivery of certain mill items. Such deliveries are beyond SBMI's control. The progress of both the mine and mill can be followed at www.silverbulletmines.com or on Twitter @bulletmines.

"Having our own assay lab and mill should make us incredibly efficient," said Mr. John Carter, SBMI's CEO who also designed the gravity pilot plant. "We will be able to have assay results back in less than a day, which will empower us to select mineralization within our target ranges to process."

By their nature, forward-looking statements include assumptions, and are subject to inherent risks and uncertainties that could cause actual future results, conditions, actions or events to differ materially from those in the forward-looking statements. If and when forward-looking statements are set out in this new release, SBMI will also set out the material risk factors or assumptions used to develop the forward-looking statements. Except as expressly required by applicable securities laws, SBMI assumes no obligation to update or revise any forward-looking statements. The future outcomes that relate to forward-looking statements may be influenced by many factors, including but not limited to: the impact of SARS CoV-2 or any other global virus; reliance on key personnel; the thoroughness of its QA/QA procedures; the continuity of the global supply chain for materials for SBMI to use in the production and processing of ore; shareholder and regulatory approvals; activities and attitudes of communities local to the location of the SBMI's properties; risks of future legal proceedings; income tax matters; fires, floods and other natural phenomena; the rate of inflation; availability and terms of financing; distribution of securities; commodities pricing; currency movements, especially as between the USD and CDN; effect of market interest rates on price of securities; and, potential dilution. SARS CoV-2 and other potential global viruses create risks that at this time are immeasurable and impossible to define.

To view the source version of this press release, please visit https://www.newsfilecorp.com/release/111869

Sign up to receive news releases by email for Silver Bullet Mines Corp. or all companies belonging to the Mining and Metals industry.