Dr. Hussen Announces the Launch of His Book, Denial of Independence: How the Four Powers and Italy Set up Somalia for Failure and Dismemberment

New York, New York--(Newsfile Corp. - October 9, 2021) - Dr. Hussen is pleased to announce that his book on the Denial of Independence: How the Four Powers and Italy Set up Somalia for Failure and Dismemberment has come out. At a time when the world is struggling to resolve postwar crisis, Dr. Hussen provides insight into what was done wrong in Somalia immediately after the war. He uses the oral account of his late father, Hagi Mohamed Hussein, leader of the anti-colonial movement in Southern Somalia, as well as material from the national archives in Italy, Britain, United States, and the United Nations. 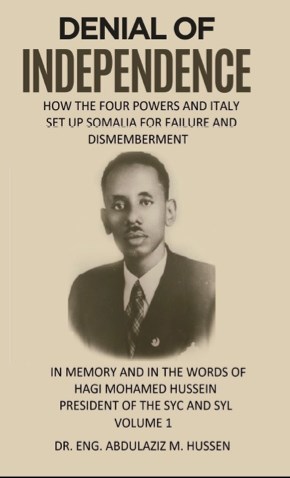 Dr. Hussen attributes the causes of the Somali tragedy on the economic subordination left behind by Italy, the seizure of indigenous land, and using such land to grow cash crops thus depriving the country of its capacity to feed itself. He points out that the Italian use of the institutions of indirect rule, such as clan chiefs, notables, and elders held the country stagnant while the integration of the fascist-trained native militia forces, known as "banda" into the army and police force set the stage for instability. He adds that Italy left behind a system of government based on favoritism and corruption, playing one clan against another, only to prove how divided the Somali people were and how distant the prospect of a Somali nation.

While Italian colonialism bears much of the blame, so do the Four Powers who used the disposition of the former Italian Colonies to advance their strategic interests. And when the Four Powers could not agree among themselves, they passed the matter to a polarized United Nations, which not only denied immediate independence to Somalia, but threw her back into the lap of her colonial master, Italy, as trustee for ten years, contrary to the wishes and welfare of the majority of the Somali people.

Dr. Hussen graduated from the University of Rome with a Dottore in Civil Engineering. He completed the PHD Program in Traffic Engineering at the same university. He also has a Master's Degree in Construction from the Southern Polytechnic State University in Marietta, Georgia. He worked extensively in Eastern and Central Africa as Project Engineer for fifteen years in the construction of roads, livestock isolation facilities, primary health care units, and schools.

Denial of Independence: How the Four Powers and Italy Set up Somalia for Failure and Dismemberment is available for purchase on Amazon.

To view the source version of this press release, please visit https://www.newsfilecorp.com/release/99141