The objective of the till survey is to develop specific diamond drill targets from the strong gold grain anomalies that were identified in the heavy mineral fraction of the till in an inaugural survey in May, 2021 (see Tower's August 28, 2021 press release). These gold grains were glacially liberated about 10,000 years ago from mineralized zones of the porphyry Cu-Au type and were then dispersed "down-ice" (along the direction of ice flow) to the southeast. The anomalous till would originally have contained many more Cu-sulphide grains than gold grains but only the gold grains survived post-glacial weathering of the till and can be used to locate the mineralized zones.

The prime target of the present survey is the very strong, 600 grains-per-sample gold anomaly in Samples 58 and 59 (Fig. 1). These contiguous samples were collected 200 m apart on a low-lying till plain overlying volcanic rocks south of the alkalic Durand Stock which, at higher elevations, contains several outcropping Cu-Au showings.

Gold is malleable and most of the grains in Samples 58 and 59 were significantly but not completely deformed by the ice (Fig. 2) during transport to their present location, suggesting that they are derived from a single bedrock source and that this source is less than 1 km up-ice. The gold grains also have a relatively high fineness (purity) between 880 and 980 (88 to 98% Au, 2 to 12% Ag), a consistency that further supports derivation of the grains from a single mineralized zone.

The most probable location of the inferred gold source is about 600 m up-ice (to the northwest; Fig. 1), near the head of the till plain on which the gold grain anomaly is located. This till-covered area lies between the minor Dominic and Buff Cu-Au showings to the east and west, respectively, and is 300 m south of and 30 m lower in elevation than the outcropping Chrysocolla Zone. Fourteen samples will be collected at a spacing of 100 x 200 m to locate the head, or origin, of the gold grain anomaly. These samples will be processed on a rush basis to guide an initial diamond drill test.

In addition, initial reconnaissance sampling at 200 m spacing on traverses 1 to 1.5 km apart will be performed in a 4 x 4.5 km area on the Western Extension claims west of the Durand Stock. Approximately 70 samples will be collected over an area of 18 square kilometers, or 4 samples per km2, a density similar to that of the inaugural till survey.

Historically, only one hole has ever been drilled on the Western Extension. In Tower's inaugural till survey, however, consistently elevated levels of gold grains were encountered in the till 5 to 10 km down-ice on the Southern Extension claims, suggesting that one or more significant gold sources are present on the Western Extension. This prospective area is separated from Durand Stock by a late-tectonic extensional fault. Importantly, the western fault block appears to have been down-dropped relative to the eastern Durand block, thereby preserving the tops of any intrusion-related hydrothermal systems in addition to the deeper levels found at Durand.

As in the inaugural till survey in May, Overburden Drilling Management Ltd. (ODM) planned and is executing the till survey and will process the samples for gold grains at its heavy indicator mineral laboratory in Ottawa, Ontario. 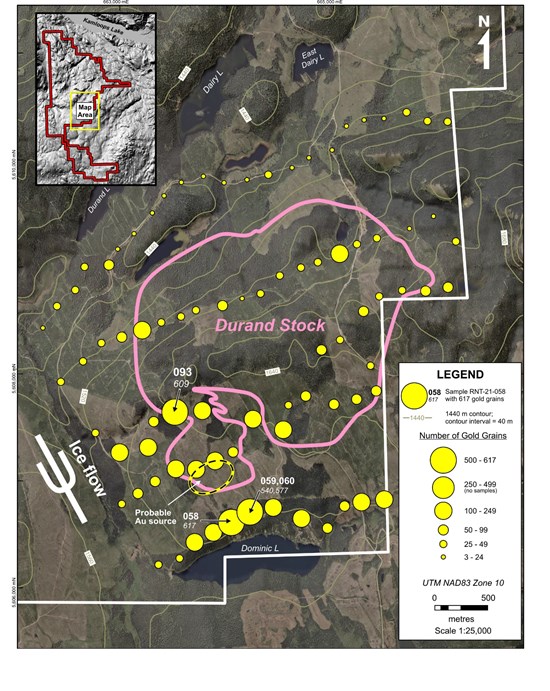 Figure 1 - Gold grain abundance per 10 kg of till over and near the Durand Stock. Sample 060 is a duplicate of Sample 059 that was collected routinely as part of the quality assurance program. The area from which the transported gold grains in Samples 058 and 059 are probably sourced is also shown. The apparent strong anomaly in Sample 093 is inflated because the sample was collected directly over known mineralization. 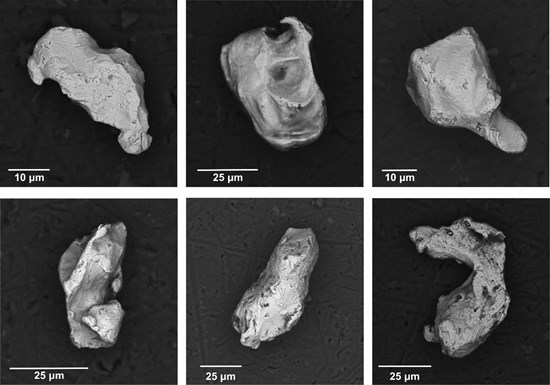 Figure 2 - Scanning electron microscope images of six representative gold grains from Sample 59. These grains display deformational features typical of most of the 540 grains that were recovered from the sample. The moderate degree of moulding of the originally pristine grains by the ice during glacial transport suggests a modest transport distance of about 500 m from their bedrock source.

To view the source version of this press release, please visit https://www.newsfilecorp.com/release/98581