Vancouver, British Columbia--(Newsfile Corp. - September 30, 2021) - Prime Meridian Resources Corp. (TSXV: PMR) ("PMR" or the "Company") announces that it will commence a helicopter-borne time-domain electromagnetic (HTDEM) and magnetic survey over the Kelly PGM-Cu-Ni Project, which is strategically located 20 kilometres east of the Sudbury basin.

The Company has retained Simcoe Geoscience Limited to complete a high-resolution Triaxial Airborne Magnetic and Helicopter Time Domain EM (HTDEM) survey on the Project. The survey is planned to consist of 300 line-kilometres at 100-metre spacing across the entire 2,418-hectare property (Figure 1). 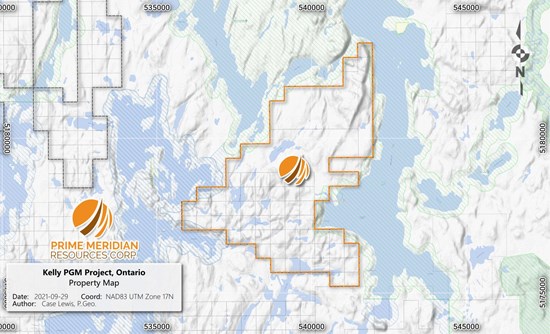 About the Kelly Project

The Sudbury Basin of Northern Ontario, has historically been one of the world's most prolific copper, nickel and PGM mining camps but the outlying areas have been generally underexplored.

Mineralization at the Kelly Project appears to be confined to a massive, hypersthene-bearing gabbro unit that extends for at least 1,000 metres along the northern edge of the Kukagami Lake Intrusion. This massive gabbro unit dips southward at about 40 degrees with the mineralized regions occurring between 50 and 100 m above the basal contact. Numerous palladium, platinum, copper, and nickel geochem anomalies have been outlined along with numerous high priority IP anomalies, and remain largely untested. (1,2)

* Note: 3E = Pt + Pd + Au. The reader is cautioned that grab rock samples are selective by nature and may not represent the true grade or style of mineralization on the Property.

The technical contents of this release were approved by Case Lewis, P.Geo., a Qualified Person as defined by National Instrument 43-101.

On behalf of the Board of Directors of
Prime Meridian Resources Corp.

The TSX Venture Exchange has neither approved or disapproved the contents of this press release.

To view the source version of this press release, please visit https://www.newsfilecorp.com/release/98104

Sign up to receive news releases by email for Prime Meridian Resources Corp. or all companies belonging to the Mining and Metals industry.