Vancouver, British Columbia--(Newsfile Corp. - September 27, 2021) - Endurance Gold Corporation (TSXV: EDG) (the "Company") is pleased to report an update on diamond drilling at both the Eagle and Imperial Zones at the Reliance Gold Property (the "Property") in southern British Columbia. The Property is located 4 kilometres ("km") east of the village of Gold Bridge with year-round road access, and 10 km north of the historic Bralorne-Pioneer Gold Mining Camp which has produced over 4 million ounces of gold.

Eagle Zone Drilling - Based on initial observations, six of the seven diamond drill holes have intersected the Eagle Zone mineralization associated within a complex zone of strongly altered brittle shears and brittle deformed areas over widths similar to those widths reported from the RC drilling in 2020 and earlier in 2021. Also, several of these holes were extended to depth to better define the host stratigraphy, intrusive relationships and the structural settings. Total depth of each of the Eagle holes varied between 84 m and 262 m for a total of 1,265.5 m diamond drilled to date at Eagle. As reported on September 13th, some of the Eagle Zone diamond drill intersections are entirely or partially oxidized. Since that update, DDH 21-006 has intersected an unoxidized interval of the Eagle Zone over about 24 m in drill core, which is an estimated true width of the Eagle Zone in this area (see Figure 2 - Photo of DDH 21-006 Eagle Shear Zone in Core). A more detailed photo montage of the core samples from DDH21-006 is available at the company website.

The Eagle Zone, striking northwest and southeast and dipping about 35 degrees to the southwest, consists of a 15 to 30 m wide area of brittle deformed and pervasive ankerite-sericite and sulphide altered mafic volcanic with brittle shearing and multi-staged brecciation. Sulphide is in the form of pyrite-pyrrhotite-arsenopyrite-stibnite with a late-stage of silicification, stockworks and quartz veinlets and quartz healed breccia. Two post-mineral but altered feldspar porphyry intrusive dykes (Eagle 0 East and Eagle 0 West dykes) are interpreted to intrude along post-mineral brittle NW-SE trending high angle reverse faults. These two dykes and associated faults sub-parallel the dominant high angle Royal Fault, a wide brittle-ductile fault zone which forms the western hanging wall of the Royal Shear complex. Based on stratigraphic correlations, the northeastern of these two faults related to the Eagle 0 East dyke is interpreted to be a reverse fault with the southwest side upthrown with respect to the northeast side of the fault(s), effectively offsetting the shallow southwest dipping Eagle Zone to the southeast in its surface expression. Therefore, a zone of oxidized alteration, sulphides and breccia intersected in the top 40 m of the DDH21-002 as well as the Eagle South Zone channel sample are currently interpreted to be the offset equivalent of the Eagle Zone.

Within the Eagle Zone drilling, a lower but narrower zone of quartz sulphide veining and stockwork, interpreted to be dipping about 80 degrees to the southwest, has also been observed in three holes associated with a lithological contact between altered mafic volcanic and sheared argillite and chert. Core samples for the Eagle Zone drilling have been submitted to the laboratory for analysis and results will be reported when received.

Imperial Zone Drilling - The majority of the drill core from historic drilling in the late 1980's at the Imperial Zone is in very poor condition, and not recoverable to professional standards, and thus four diamond drill holes were planned at the Imperial Zone to get a complete structural, alteration and mineralized section along strike and at depth on the Imperial Zone. Three holes drilled at -45 degrees have been completed and have intersected the Imperial Zone at approximately 100 m below surface along about 100 m of strike. Depth of the three completed holes is 257 m, 216.5 m and 249.6 m respectively for a total of 723.1 m drilled to date at the Imperial Zone. A fourth drill hole is currently in progress drilling at minus 82 degrees with the objective of intersecting the Imperial Zone at about 150 m step-out down-dip from the intersection elevation of the first three diamond drill holes. In the first three holes, the interpreted Imperial Zone iron carbonate-sericite alteration, sulphide alteration, silicification and breccia in strongly altered mafic volcanics has been observed in intervals between 10 and 25 m in each of the three holes with continuity at the same structural and stratigraphic location. (see Figure 3 - Photo of DDH 21-009 Imperial Zone in Core). A more detailed photo montage of the core samples from DDH21-009 is available at the company website.

The Company has previously completed two phases of reverse circulation ("RC") drilling in late 2020 and spring 2021 with the completion of 51 RC drill holes. Thirty-Five (35) of these 51 RC holes returned encouraging gold intersections exceeding 3.0 m in width. The significant intersections from the RC drill program are available on the Company website. 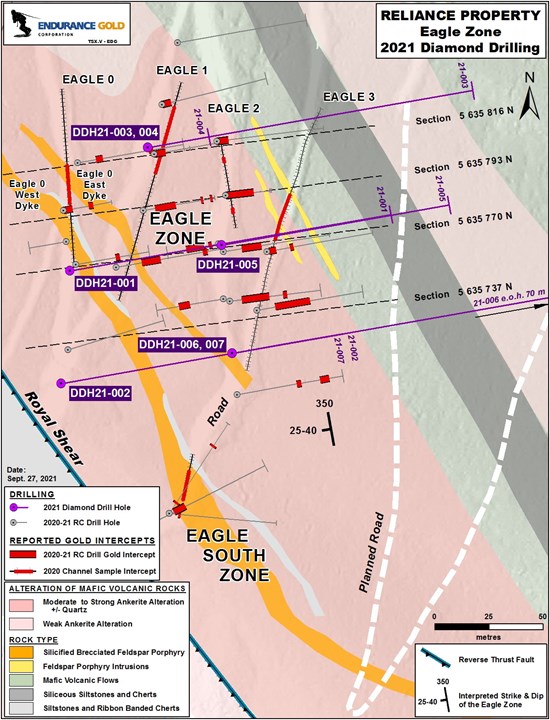 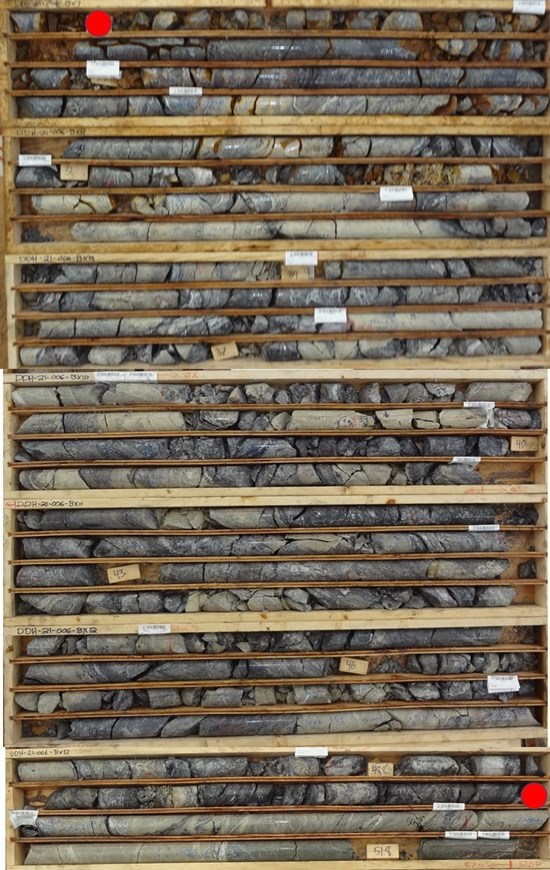 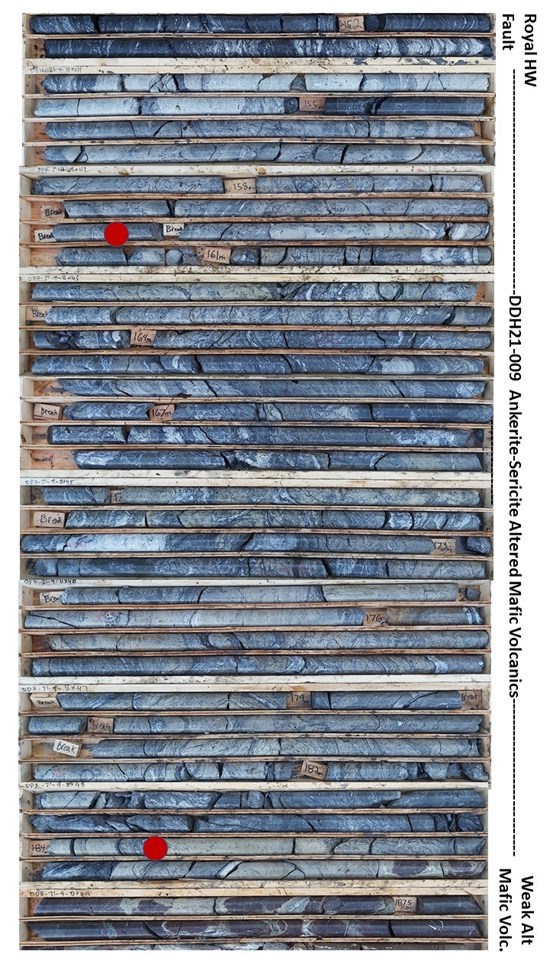 To view the source version of this press release, please visit https://www.newsfilecorp.com/release/97711