The Tonopah North project consists of unpatented lode mining claims covering approximately 20 square kilometres north and west of the Tonopah West DPB resource area. The claims had been staked to cover the western margin of the recently identified Tonopah Caldera.

The caldera margin is an important foci for mineralization on the Tonopah West project. Detailed mapping and interpretation shows the caldera margin is buried beneath younger volcanic rocks and gravel. A specific unit called the Siebert Tuff outcrops along the margin of the caldera. These tuffaceous sediments and volcanic tuff form a unit classified as moat sediments that occur in close proximity to the margin of the caldera.

Mapping and a gravity geophysical survey show the caldera is east-west at the Tonopah West project and swings northwest then north and finally eastward. The configuration of the caldera is paramount to finding new veins in the district and two distinctive high-priority targets have emerged.

The first target is along the western edge of the Tonopah Caldera where a large northwest fault system appears to offset the caldera rim. The structure appears to be the strike extension of the Pittsburg-Monarch fault system (PMFS) which controls thick veins in the Victor and Ohio areas of the Tonopah West project. At Victor, the vein was 24 metres thick at the intersection with the PMFS. Similarly, the Ohio vein was 14 metres thick where it intersected the PMFS.

The target is compelling in that a new area under the pediment gravels may host another Victor or Ohio vein set. Additional exploration work is being planned to include CSAMT and scout drilling.

The second exciting target is on the north side of the Tonopah Caldera where a strong east-west structural fabric has been mapped and regional magnetic data show a strong east-west structural domain. The geologic setting for the second target is very similar to the Tonopah district itself. The Tonopah North property covers the area which has roughly the same strike as the existing Tonopah silver district. More work is justified as the prize could be a second Tonopah-sized district located beneath post mineral cover and pediment gravels. 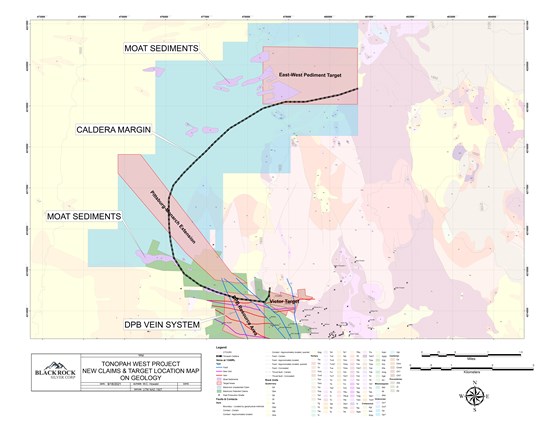 Figure 1: Map of Tonopah North claims and relationship to the Tonopah West project and targets

Blackrock Silver is hosting a live town hall webinar today, Tuesday, September 21st at 11 am Pacific, including a presentation and investor Q&A with management.

Blackrock's exploration activities at the Tonopah West Project are being conducted and supervised by Mr. William Howald, Executive Chairman of Blackrock Silver Corp. Mr. William Howald, AIPG Certified Professional Geologist #11041, is a Qualified Person as defined under National Instrument 43-101. He has reviewed and approved the contents of this news release.

Blackrock is a junior gold-focused exploration company that is on a quest to make an economic discovery. Anchored by a seasoned Board, the Company is focused on its Nevada portfolio of properties consisting of low-sulphidation epithermal gold & silver projects located along the established Northern Nevada Rift in north-central Nevada and the Walker Lane trend in western Nevada.

Forward-Looking Statements
This news release contains "forward-looking statements" within the meaning of Canadian securities legislation. Such forward-looking statements concern the Company's strategic plans, completion and exercise of the Tonopah option agreement, timing and expectations for the Company's exploration and drilling programs, estimates of mineralization from drilling, geological information projected from sampling results and the potential quantities and grades of the target zones. Such forward-looking statements or information are based on a number of assumptions, which may prove to be incorrect. Assumptions have been made regarding, among other things: conditions in general economic and financial markets; accuracy of assay results; geological interpretations from drilling results, timing and amount of capital expenditures; performance of available laboratory and other related services; future operating costs; and the historical basis for current estimates of potential quantities and grades of target zones. The actual results could differ materially from those anticipated in these forward-looking statements as a result of the risk factors including the ability of the Company to complete the Tonopah lease option, the timing and content of work programs; results of exploration activities and development of mineral properties; the interpretation and uncertainties of drilling results and other geological data; receipt, maintenance and security of permits and mineral property titles; environmental and other regulatory risks; project costs overruns or unanticipated costs and expenses; availability of funds; failure to delineate potential quantities and grades of the target zones based on historical data, and general market and industry conditions. Forward-looking statements are based on the expectations and opinions of the Company's management on the date the statements are made. The assumptions used in the preparation of such statements, although considered reasonable at the time of preparation, may prove to be imprecise and, as such, readers are cautioned not to place undue reliance on these forward-looking statements, which speak only as of the date the statements were made. The Company undertakes no obligation to update or revise any forward-looking statements included in this news release if these beliefs, estimates and opinions or other circumstances should change, except as otherwise required by applicable law.

To view the source version of this press release, please visit https://www.newsfilecorp.com/release/97090