Vancouver, British Columbia--(Newsfile Corp. - September 17, 2021) - Spearmint Resources Inc. (CSE: SPMT) (OTC Pink: SPMTF) (FSE: A2AHL5) (the "Company" or "Spearmint" or "Optionee") is pleased to announce that it is now underway with its phase II work program on the 100-percent owned "Goose Gold Project" directly bordering New Found Gold Corp.'s Queensway project in Newfoundland. Recently, (June 30, 2021) New Found Gold announced a brand-new discovery at the 'Golden Joint' zone of 430.2 G/T over 5.25 metres which is their second highest value encountered to date and Spearmint is the closest property to this new discovery as well as the 'Keats' discovery hole (see map). Management cautions that past results or discoveries on properties in proximity to Spearmint may not necessarily be indicative to the presence of mineralization on the Company's properties. 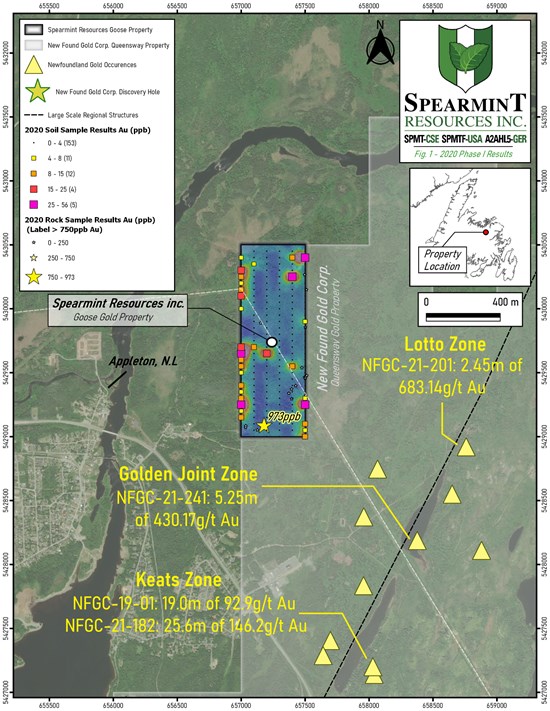 James Nelson, President of Spearmint Resources stated, "We are extremely excited to have begun the phase II work program on our 'Goose Gold Project' directly bordering New Found Gold Corp.'s Queensway project. New Found Gold continues to have success on their project and this work program is designed to tighten up last years results with the goal of defining drill targets and additional exploration concepts. We also recently closed on the acquisition of the 'Green Clay Lithium Project' in the Clayton Valley of Nevada where we plan to begin a work program shortly. Additionally, a phase III drill program on our flagship Clayton Valley Lithium project is being planned for Fall 2021 with the goal to build upon our recently released a maiden resource estimate which included a total of 1,006,000 tonnes of Lithium Carbonate Equivalent (LCE). We are well funded for multiple drill and work programs in the US and Canada and look forward to building upon an already active and successful year."

Spearmint's other projects in British Columbia include the 'Safari' Copper-Gold Project consisting of 9,007 contiguous acres located in the northern Quesnel Trough in North-Central BC, and the 'Hammernose' Gold Project consisting of 8,685 acres directly bordering Westhaven Gold Corp.'s Shovelnose Property in the Spences Bridge Gold Belt located in Southern British Columbia, Canada. Management cautions that past results or discoveries on properties in proximity to Spearmint may not necessarily be indicative to the presence of mineralization on the Company's properties.

To view the source version of this press release, please visit https://www.newsfilecorp.com/release/96821