Montreal, Quebec--(Newsfile Corp. - September 9, 2021) - Vanstar Mining Resources Inc. (TSXV: VSR) (OTCQX: VMNGF) (FSE: 1V8) ("Vanstar", or the "Company") is pleased to announce that it is initiating a drilling program on its Felix property. A drill is expected to arrive on site this week to initiate a 2,000 m drill program that was designed to test gold targets within an iron formation identified with geophysics.

A recently completed IP survey focused on a western portion of the property underlain by a folded banded iron formation (Figure 1) identified a number of chargeability and resistivity anomalies that are consistent with previously reported MEGATEM conductors. As a result, the Company has designed its drilling program (Figure 2) to intercept several conductors associated with the structural fold of the iron formation. 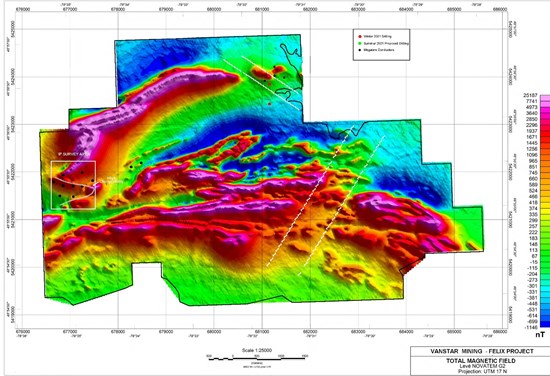 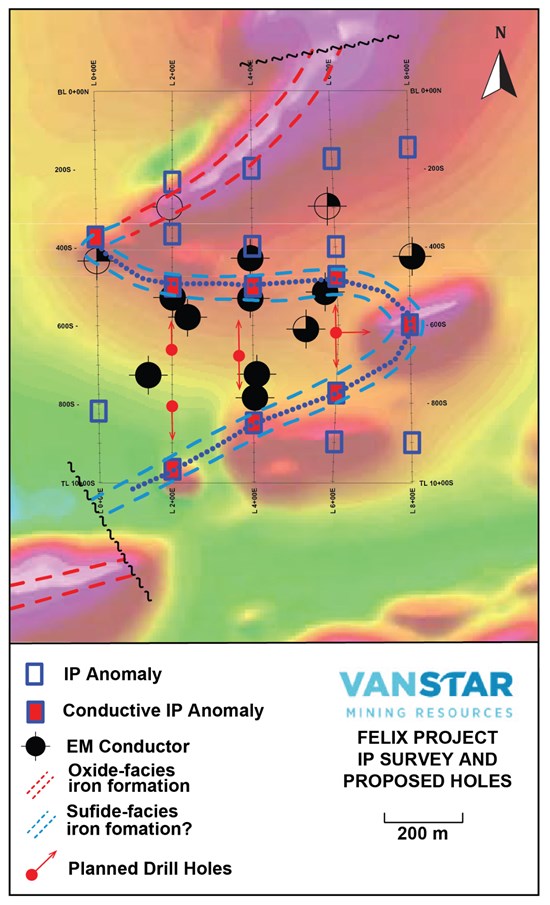 Drilling on Nelligan is proceeding well with the infill drilling portion of the program completed. Drilling on the western extension of the deposit has begun and intends to step out to the west in 200 m increments to expand on the known mineralization. J.C. St-Amour, President and CEO, recently visited the property and stated "We are pleased to see the drilling progressing well and to see the efforts that IAMGOLD are putting into the project. Drill samples are in the assay lab and will be release as they become available to the company."

Mr. St-Amour conducted an interview from the core shack, which can be viewed here https://youtu.be/YqvPspGNpts.

The company is mobilizing a ground crew to conduct a prospecting and sampling program on the Frida and Eva projects. Work is expected to begin in and around September 14th.

About the Felix Project

The Felix project is located in an environment of volcano sedimentary origin comprising a unit of volcanic rock in the north, another in the south and the central part is occupied by sedimentary rocks. Late intrusions in the form of batholiths, plutons or dikes are also noted all around the property. The property rests mainly on the rocks of the Chicobi Group. The sedimentary basin contains mudstones and graphitic turbiditic sandstones, with a minor magnetite-chert and hematite-jasper banded iron formation and a conglomerate. A significant Algoma-type iron formation is present in the northern part of the property. The gold grades intersected in the historic drilling are located near the southern contact of the latter. In addition, the Chicobi-Nord regional fault crosses the northern part of the property. This fault, of regional dimension, borders the Normetal mining camp to the south. The project is located in the eastern extension of this mining camp where there are former massive sulphide mines and numerous gold showings, such as those of the former Perron gold mine which are actively worked on by Amex Exploration. Shear zones parallel to the Chicobi-Nord fault are also found in the sediments of the Chicobi Group and as evidenced by the Authier gold showings located west of the property.

Vanstar Mining Resources Inc. is a gold exploration company with properties located in Northern Québec at different stages of development. The Company owns a 25% interest in the Nelligan project (3.2 million inferred ounces Au, NI 43-101 October 2019) and 1% NSR. The Nelligan Project won the "Discovery of the Year" award at the 2019 Quebec Mineral Exploration Association Xplor Gala. Vanstar also owns 100% of the Felix property under development in the Chicobi Group (Abitibi mining camp, 65km East of Amex Perron property) and 100% of Amanda, a 7,679 ha property located on the Auclair formation with historic gold showings up to 12.1 g/t Au over 3 meters.

To view the source version of this press release, please visit https://www.newsfilecorp.com/release/95902.

Sign up to receive news releases by email for Vanstar Mining Resources or all companies belonging to the Mining and Metals industry.