Toronto, Ontario--(Newsfile Corp. - August 30, 2021) - Cerrado Gold Inc. (TSXV: CERT) (OTCQX: CRDOF) ("Cerrado" or the "Company") is pleased to announce its operational and financial results for the second quarter of 2021 ("Q2/21"). The financial results are reported and available on SEDAR as well as on the company website (www.cerradogold.com).

(All numbers reported in US dollars)

Mark Brennan, CEO and Co-Chairman stated: "We are very pleased to report much improved second quarter results of operations at Minera Don Nicolás, which continue to exceed management expectations. The results demonstrate the tremendous effort of the team at MDN. The second quarter saw the company achieve record quarterly production since the acquisition by Cerrado, as well as record throughput rates and head grade."

He continued, "As a result, the Company recorded $2 million in both mine operating margin and operating cash flow during the second quarter. This performance has been in spite of severe COVID-19 restrictions which continue to impose significant interruption to optimizing production and costs. We look to continue to build upon the successful second quarter results to achieve aggressive production objectives for the second half of 2021."

"In addition to the strong operating results, we are extremely pleased with the continued exceptional results from our Monto Do Carmo project in Brazil, where a recently completed PEA released on August 24 highlighted robust economics with an NPV5% of $617Mm and an IRR of 94%. Exploration work continues to further expand resources as we continue to move the project forward."

A summary of key operational and financial performance at MDN for the second quarter 2021 is provided in the table below: 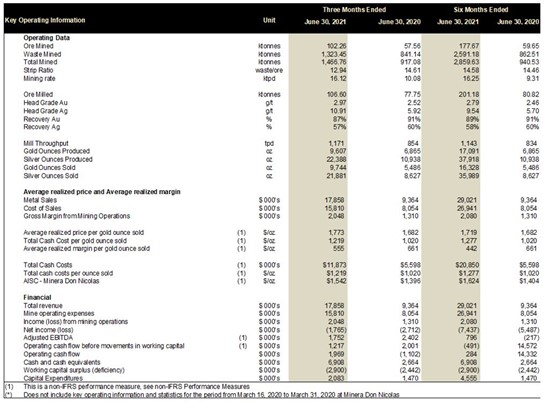 To view an enhanced version of this table, please visit:
https://orders.newsfilecorp.com/files/7487/94839_cerradotable1.jpg

MDN Results for 2021 continued to be impacted by various COVID-19 restrictions and by a government mandated shutdown over the holiday period that resulted in the loss of 10 operating days in January. Thereafter, operational results have continued to improve as some restrictions were lifted allowing for a full complement of employees to be housed at site. While mining and processing operations have begun to return normal, previous restrictions have required additional stripping needed to access additional high-grade ore. This was completed in Q2 and has positioned the mine to deliver higher grade ores in Q2 and for the rest of H2/21.

Cerrado has maintained tight onsite protocols to ensure smooth operations, restricting entry and exit from the site without a proper medical affidavit and a quarantine period if deemed necessary. The mine continues to use thermal body cameras and daily temperature checks to detect early COVID-19 symptoms to limit any possible spread. All required COVID-19 protocols remain in place with enforced physical distancing and other safety precautions; enhanced cleaning and sanitizing, use of extra protective gear and remote work policies applied where possible.

Despite these severe added burdens, management has been successful in ensuring its ability to continue operating effectively despite the COVID-19 effects and the additional cost and time to implement enhanced health and safety protocols, and occasional workforce restrictions. MDN is the only mine in Argentina that did not stop operations since the beginning of the Covid epidemic. Mining operations at Minera Don Nicolás ("MDN") have continued to undergo continuous operational improvement implemented since the acquisition of the mine just a year ago (March 2020).

As a result, MDN has seen a significant reduction in the AISC and Cash Costs driven by improved operational performance in all areas of the mine. Operational results are expected to continue to improve strongly over the course of 2021 as the Company reduces low grade feed to the plant and ore grades further improve, leaving MDN well positioned to generate robust operating results and free cash flow for the foreseeable future.

Net loss for the three months ended June 30, 2021, was $1.8 million as compared to $2.7 million for the three months ended June 30, 2020 an improvement of $0.9 million. The decrease in net loss is primarily a result of a mine operating margin of $2.0 million (an increase in of $0.7 million) and a decrease in general and administrative expenses of $1,1 million, offset by an increase of other expense by $0.9 million. Net loss in the second quarter of 2021 also represented a $3.9 million improvement as compared to Q1 2021.

The Company incurred general and administrative expenses of $1.9 million for the three months ended June 30, 2021, a $1.1 million decrease compared to the general and administrative expenses incurred during the three months ended June 30, 2020. During the three months ended June 30, 2021, the Company had increases in salaries and wages of $0.2 million, consulting fees of $0.1 million which were offset by a decrease of $1.6 million in share-based compensation expense. The increase in salaries and consulting fee expenses were largely the result of an increase in corporate activities required after the acquisition of MDN in 2020. General and administrative expenses were also $0.3 million lower as compared to Q1 2021.

To view the source version of this press release, please visit https://www.newsfilecorp.com/release/94839