Toronto, Ontario--(Newsfile Corp. - August 17, 2021) - Rockcliff Metals Corporation (CSE: RCLF) (OTCQB: RKCLF) ("Rockcliff" or the "Company") is pleased to announce that having met all of the terms and conditions of the option agreement with Hudbay Minerals Inc. ("Hudbay") dated September 20, 2016, the Company now holds a 100% ownership interest in the Bur Property subject to a 2% Net Smelter Return Royalty granted to Hudbay. The 2007 resource estimate prepared for the Bur Property by Hudbay estimates the Bur Zinc-Copper Deposit hosts 1,050,000 tonnes (Indicated) grading 1.9% Cu, 8.6% Zn, 0.05 g/t Au, 12.1 g/t Ag and 300,000 tonnes (Inferred) grading 1.4% Cu, 9.0% Zn, 0.08g/t Au, 9.6g/t Ag. Since discovery in 1968, 237 holes totalling 71,678.5 metres have been completed on the Bur Zinc-Copper Deposit of which Rockcliff has accounted for the last 15,748.5 metres in 65 holes. The deposit remains open in all directions with an additional 5,000 metres of favourable underexplored geology along strike of the deposit. The Bur Property has excellent infrastructure with a year-round access road, clearing for portable buildings, and a box cut and portal. Initial metallurgical testwork indicates a saleable industry acceptable concentrate. The Bur Property lies within the Flin Flon-Snow Lake Greenstone Belt ("Belt"), the largest Paleoproterozoic VMS district in the world and the most prolific VMS district in Canada.

President and CEO, Don Christie, commented "We are extremely pleased to have added this significant deposit to our existing portfolio of Manitoba based projects by solidifying our 100% ownership interest in the Bur Property. Our first priority is to prepare an updated 43-101 Mineral Resource Estimate in order to incorporate the results from our very successful drill campaign at Bur carried out over the past four years. Given the significant amount of drilling completed by Rockcliff and grades returned, we expect a material increase in tonnage compared to the 2007 resource estimate. We plan to publish the updated 43-101 Mineral Resource Estimate in the 4th quarter."

About the Bur Property

Image 1: Bur site is accessible by road leading to a previously constructed box-cut and portal.

To view an enhanced version of Image 1, please visit:
https://orders.newsfilecorp.com/files/3071/93361_image1.jpg

The completion of the phase four drill program in May 2020 was successful in identifying additional shallow, near surface, high-grade zinc-copper mineralization along strike of the historical Bur Zinc-Copper Deposit (pressed released May 7, 2020).

Significant down the hole assays from Rockcliff's phase four drill program are included in the following table: 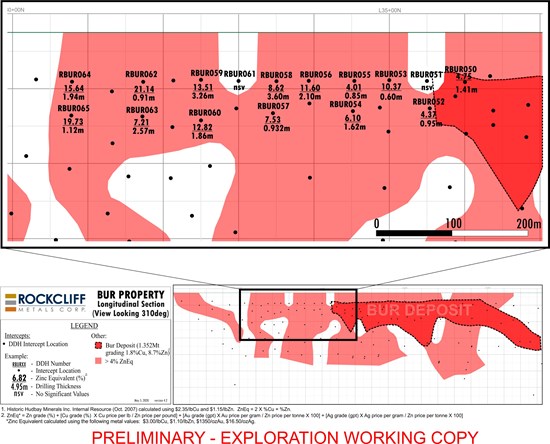 Results generated from benchscale testing completed by Base Metallurgical Laboratories in Kamloops, BC identified and confirmed a selective flowsheet to produce separate copper and zinc concentrates while achieving industry accepted market quality. The treatment process is similar to that previously reported for Tower, Rail and Talbot; conventional by which copper and zinc are recovered sequentially by flotation requiring a relatively coarse primary grind of 115 micron k80 and regrind sizes in the 25 to 30 micron k80 for both copper and zinc. The flowsheet tested does not require the use of cyanide to separate zinc from copper and the reagent scheme is applicable to all four properties based on the samples tested. Testing was completed on selected drill hole samples attempting to characterize the orebody. Results produced from open circuit batch tests are described in the following table showing concentrate quality and metal recoveries:

To view an enhanced version of Table 2, please visit:
https://orders.newsfilecorp.com/files/3071/93361_table2.jpg

Ore sorting amenability testing was undertaken to characterize material representing the Bur Zinc-Copper Deposit. Coarse crushed samples were selected by hand at Base Met Labs in Kamloops represent both waste/dilution and mineralized target areas and shipped for testing at the Steinert facility in Kentucky.

The material provided to Steinert was nominal 2.5 cm in size. The approach to sorting followed the same protocol applied to Rail and Tower properties; captured on the Company's May 1, 2020 News Release. Ore sorting demonstrated flexibility to preconcentrate feed material with varying mass rejection and recovered over 90% Cu and 97% Zn with just over 25% mass rejection. Complete sorting results are provided by the table below.

To view an enhanced version of Table 3, please visit:
https://orders.newsfilecorp.com/files/3071/93361_table3.jpg

Notes: 1. CIM definitions were followed for the estimation of mineral resources. 2. Mineral resources are estimated at a zinc equivalent cut-off of 5%. 3. Cut-off grade was based on a zinc price of US$1.15 per pound and a copper price of US$2.35 per pound. 4. Given the tonnage, grade and orientation of the deposit, AMEC considered the Bur Deposit to be reasonably amenable to extraction using underground mining methods. 5. Specific Gravity measurements used to estimate the mineral resource tonnes ranged from 2.64 to 3.74 with an average of 3.16. 6. A minimum mining width of 3 metres was used. 7. Mineral resources are not mineral reserves and do not have demonstrated economic viability. 8. The deposit was documented in a report dated October 1, 2007 and titled "Bur Project, Snow Lake Manitoba, Canada NI 43-101 Technical Report" (the "Bur Deposit Report"). The report was prepared for Hudbay by AMEC and was filed on Hudbay's SEDAR profile on January 31, 2008.

The historical Bur Zinc-Copper Deposit is a narrow stratiform, distal, VMS deposit that occurs within a turbidite assemblage of interbedded metagreywacke, metasiltstone and graphitic meta-argillite in a basinal area situated between two granitic intrusions. The northeast striking deposit dips 60-70 degrees northwest, ranges from <0.3metres up to 5 metres thick and to date has a known lateral extent of approximately 4,500 metres. Historic and recent drilling throughout the Bur Property has encountered near surface, disseminated, semi-massive and massive sulphide mineralization below shallow overburden along a strike length of over 8,000 metres and to a vertical depth of 950 metres. Mineralization consists of sphalerite, chalcopyrite, pyrrhotite, pyrite, galena and arsenopyrite. The Bur Zinc-Copper Deposit is open in all directions and contains up to 20% felsic or cherty nodules consisting of wall-rock and late quartz fragments displaying a brecciated texture to the mineralization.

Historical estimates of grade and tonnage disclosed in this press release are viewed as reliable and relevant based on the information and methods used at the time. The 2007 NI 43-101 Bur Deposit Report was prepared in compliance with resource definitions under NI 43-101 but must be considered only as historic resources as neither Rockcliff nor its Qualified Persons have done sufficient work to classify the historic estimate as a current mineral resource under current mineral resource or mineral reserve terminology. The historic resource should not be relied upon. Additional work including surface geophysics, drilling and bore hole geophysics will need to be completed to upgrade the historical resource to current.

Ken Lapierre P.Geo., VP Exploration of Rockcliff, a Qualified Person in accordance with Canadian regulatory requirements as set out in NI 43-101, has read and approved the scientific and technical information that forms the basis for the disclosure contained in this press release.

Rockcliff is a Canadian resource development and exploration company with several advanced-stage, high-grade copper and VMS dominant deposits in the Snow Lake area of central Manitoba. The Company is a major landholder in the Belt which is the largest Paleoproterozoic VMS district in the world, hosting high-grade mines and deposits containing copper, zinc, gold and silver. The Company's extensive portfolio of properties totals approximately 4,000 km² and includes seven of the highest grade undeveloped VMS deposits in the Belt. Rockcliff has a joint venture with Hudbay at the Company's 49% owned Talbot Copper Deposit.

This news release contains "forward-looking information" within the meaning of applicable Canadian securities laws. Generally, these forward-looking statements can be identified by the use of forward-looking terminology such as "plans", "expects", "budget", "scheduled", "estimates", "forecasts", "intends", "anticipates", or "believes", or the negatives and / or variations of such words and phrases, or state that certain actions, events or results "may", "could", "would", "might" or "will be taken", "occur", "be achieved" or "has the potential to". In particular, the forward-looking statements in this press release include, without limitation, statements regarding: future projected production, capital costs and operating costs, recovery methods and rates, development methods and plans, commodity prices and Mineral Resource Estimates. Statements relating to "Mineral Resources" are deemed to be forward-looking information, as they involve the implied assessment that, based on certain estimates and assumptions, the Mineral Resources described can be profitably produced in the future.

To view the source version of this press release, please visit https://www.newsfilecorp.com/release/93361

Sign up to receive news releases by email for Rockcliff Metals Corp. or all companies belonging to the Mining and Metals, Energy Metals industries.