Three additional holes were drilled in the Passiflora target during the 2021 spring campaign. The Passiflora has been a target from early exploration efforts in the Silver Cliff area. In 1983 Ron Rivera of CoCa Minerals (CoCa) conducted a mineral inventory study based on 18 drill holes in what they thought was the main target in the Passiflora. This excluded 13 holes that he determined did not have a bearing on the main ore body. CoCa indicated an inferred resource of 40 million tons of 1.62 oz. per ton (not NI 43-101 compliant and therefore not to be relied upon) at the Passiflora, with the best intercept reported to be 256 g/t silver and 1.4 g/t gold. The historical estimate did not use current CIM definitions and the exploration manager has not done sufficient work to classify the historical estimate as current mineral resources or reserves. 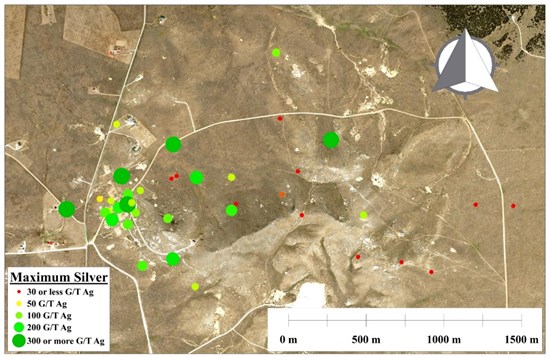 Viscount has drilled 4 holes in the Passiflora target to date, with good results. Viscount drilled one hole in the Passiflora in 2020 to a depth of 193.9 m that showed anomalous silver throughout, some anomalous gold as well as strong silica and clay alteration and pyritization over most of the hole. Hole 21-08 was a stratigraphic and lithological test conducted outside of the main zone of mineralization. Hole 20-05 saw silver mineralization throughout the total length of 172.7 meters. Holes 21-09 and 21-10 also encountered silver mineralization for the length of both bores (both 183.3 meters). In hole 21-10, a 1.8-meter section assayed 142.3 g/t silver. Anomalous gold mineralization throughout (the highest gold assay of 0.95 g/t) has been noted in the Passiflora target in both holes. In hole 21-10 there was gold mineralization over 183.3 meters. Gold does not seem to be associated with the alteration at the Kate Resource area but is commonly associated with Passiflora alteration metals.

Silver Cliff Exploration Manager, Jacob Hooker, commented on the immense potential for Passiflora resources saying, "Intensifying phyllic alteration is visibly evident in drill core from numerous Passiflora holes to the depth of around 200 meters. This information, paired with the known volcanic history of the region, suggests that a porphyry system could lie beneath."

Holes 20-05, 21-09, and 21-10 were all strongly altered with what was visually identified as sericite and pyrite. Also, copper seems to be enriched in zones throughout holes 20-05, 21-09 and 21-10, though no chalcopyrite was observed in the core. Thin sections are currently being prepared for microscopic mineral identification. Both sericite and pyrite are minerals that are part of the phyllic alteration halo assemblages that commonly surrounds Copper porphyry deposits. Rivera also mentioned that Duval Mining geologists had identified a quartz monzonite at shallow depth in the vicinity of the Passiflora mine. Quartz monzonite is a rock that is also commonly associated with porphyry ore bodies.

All Viscount's drilling to date has been core. The company has implemented a rigorous quality assurance/quality control program at the Silver Cliff project. Core is retrieved from the drill site to a locked storage facility, where it is logged and then cut by independent geologists. Half of the core is bagged, and standards, blanks and duplicates are frequently inserted in to the sample stream. These are then boxed and then shipped via USPS to Skyline Labs in Tucson, Arizona. Pulps and rejects will then be retrieved, and stored with the split core at our locked facility.

To view the source version of this press release, please visit https://www.newsfilecorp.com/release/90976.