Vancouver, British Columbia--(Newsfile Corp. - July 13, 2021) - Heliostar Metals Limited (TSXV: HSTR) (OTCQX: HSTXF) (FSE: RGG1) ("Heliostar" or the "Company") is pleased to announce results from nineteen additional drill holes completed at the Apollo target at the Unga project in 2021. The Company has three drill rigs active on the project and has completed 52 holes for a total of 5,724 metres to date.

Heliostar VP of Exploration, Sam Anderson, commented: "The Apollo target continues to deliver strong gold and base metal hits in this year's drilling. These results grow the strike extent to 745 metres with mineralized intercepts, a subsection of the broader two kilometre-long trend. Drilling is ongoing at Apollo and assays from eight completed holes remain pending. The Company is continuing its fully funded, three drill program and in 2021 will complete more metres of drilling on Unga Island, outside of the SH-1 resource area, than has been completed in the entire 135-year history of the project. The Company is focused on revealing the district-scale potential of the property with the current program."

Drilling has continued at Apollo with a focus on the Shaft 2 and Sitka Mine shaft areas. At Shaft 2, multiple veins have been intersected with a main vein defined over 365m of strike and 100m of depth. Mineralization varies from gold-dominant (APSRC21-02, APSRC21-06) to base metal-dominant (APSRC21-08) and appears to change rapidly over short intervals. Controls on mineralization are not yet well understood but intercepts remain open to depth and to the west.

High grade gold has been intersected over a strike length of 745m at Apollo and results from the remaining eight completed holes with assays pending will be used to refine the mineralization controls. Follow-up diamond drilling is a clear priority given the widespread nature of the intercepts and to test the along strike and deeper targets indicated by historic exploration shafts and tunnels. 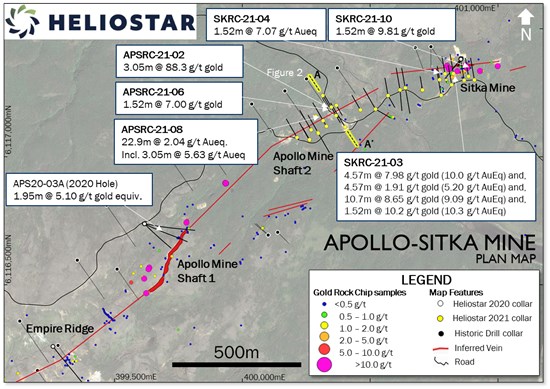 Figure 1: Plan map showing location of the Heliostar and historic drilling at the Apollo prospect. 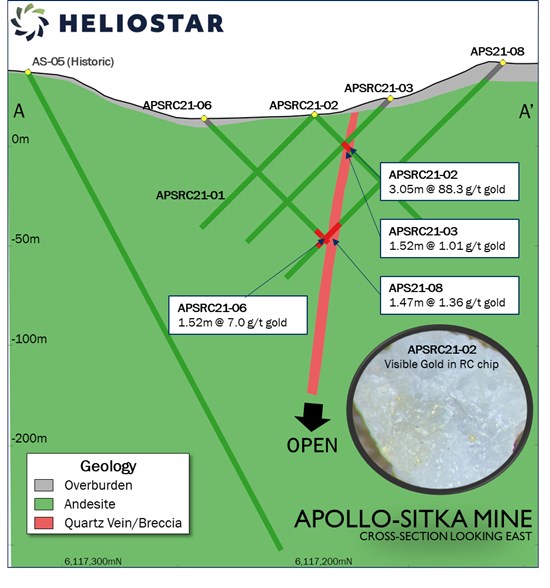 Figure 2: Plan map showing location of the Heliostar and historic drilling at the Apollo prospect.

The Company has completed 52 holes for a total of 5,274 metres since mobilizing to the property in April. There are one diamond and two RC rigs on site that are rapidly advancing the drilling program and the company expects to complete a planned 7,000 metres within the current C$6,000,000 budget. 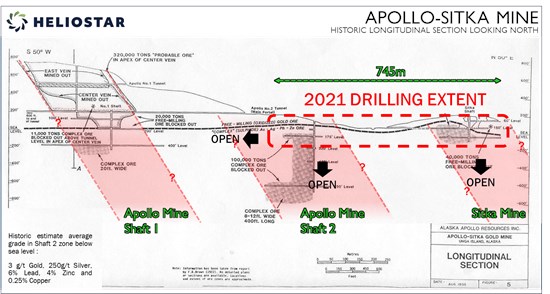 Heliostar is a well-financed junior exploration and development Company with a portfolio of high-grade gold projects in Alaska and Mexico.

The Company's flagship asset is the 100% controlled Unga Gold Project on Unga and Popof Islands in Alaska. The project hosts an intermediate sulfidation epithermal gold deposit, located within the district-scale property that encompasses 240 km2 across the two islands. Additional targets on the property include porphyry copper-gold targets, high sulphidation targets and intermediate sulphidation epithermal veins.

On Unga Island, priority targets include: the SH-1 and Aquila, both on the Shumagin Trend, the former Apollo-Sitka mine, which was Alaska's first underground gold mine, and the Zachary Bay porphyry gold-copper prospect.

Gold mineralization at the Centennial Zone is located on neighbouring Popof Island within four kilometres of infrastructure and services at Sand Point.

Drill core samples were shipped to ALS Limited in Whitehorse, Yukon for sample preparation and for analysis at the ALS laboratory in North Vancouver. The ALS Whitehorse and North Vancouver facilities are ISO/IEC 17025 certified. Silver and base metals were analyzed using a four-acid digestion with an ICP finish and gold was assayed by 30-gram fire assay with atomic absorption ("AA") spectroscopy finish and overlimits were analyzed by 30g fire assay with gravimetric finish.

To view the source version of this press release, please visit https://www.newsfilecorp.com/release/90069