The brief Q1-2021 Drill Program was designed around two primary objectives: (1) to confirm the south-southwest extension of the historic Rottenstone deposit (the possibility of a southwest extension was initially identified during a drilling campaign completed in 2016); and, (2) to drill and test the high priority Island Showing target area.

"We are very pleased that the Q1-2021 drill program accomplished both of our primary objectives," said Brad Van Den Bussche, Fathom's President & CEO. "We have confirmed, through our geotechnical data compilation initiatives and drilling south of the Rottenstone Mine that not only is the Rottenstone deposit larger than previously recognized, but that we have developed a framework to identify additional Rottenstone-like deposits. This framework will be instrumental in helping us pursue new discoveries such as the mineralized drillhole AL21021, located 550m from the historic Rottenstone Mine. This is a fantastic discovery - it is the first ever intersection of significant ultramafic, nickel sulphide mineralization outside of the historic Rottenstone deposit. We are very encouraged by both the thickness of the intersection and the positive off-hole BHEM conductor to the south."

Fathom drill programs in both 2016 and Q1-2021 (Figure 1) oriented south-southwest of the historic Rottenstone Mine1 now confirms a previously unrecognized extension of 40m in a south-southwest direction that remains open. In addition, drillhole AL21021 intersected 9.23m of mineralized ultramafic host rock 550m north-northwest of the Rottenstone deposit indicating the potential for another Rottenstone-like deposit.

*Width refers to drillhole width and not true widths

**PGE refers to Pd+Pt plus rhodium, osmium, ruthenium and iridium 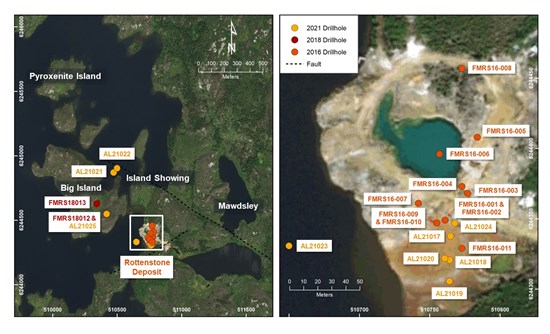 Ian Fraser Fathom's VP Exploration commented, "The Q1- 2021 drilling has confirmed that there is more Rottenstone-type mineralization extending 40m south-southwest of the historic Rottenstone Mine and remaining open. However, it is important to note that expanding the Rottenstone deposit is not the Company's exploration focus. The drilled extension has allowed us to further enhance our understanding of the geologic setting and specifically that these types of deposits are zoned; meaning that they grade outwards from a higher-grade net-textured core. The knowledge gained will be instrumental as we seek to recognize when we are proximal to the higher-grade cores of these types of deposits. Drillhole FMRS16-003 which was collared less that 10m from the historic Rottenstone Mine has a very similar grade and mineral composition to drillhole AL21021. We are confident our discovery in AL21021 is an indication of higher-grade mineralization proximal to this drillhole. Recognizing this framework and geologic setting will be critical in assisting with the identification of additional Rottenstone-like discoveries."

In addition to the Q1-2021 Drill Program, in April the Company also completed a high-resolution gradient magnetic survey consisting of over 9,000 line-km over substantially the entire 90,000ha Albert Lake Property. The survey data is currently being interpreted and will be a valuable tool for planning the Summer/Fall-2021 Exploration Program. The Summer/Fall-2021 Exploration Program will commence on June 15, 2021. It is expected to include an airborne EM survey over key targets including the Island Showing area discovery, as well as extensive mapping, sampling, prospecting and B-horizon soil geochemistry. In addition, multiple historic drillholes will be probed for the first time and re-probed with BHEM. A diamond drill program of between 4,000 and 5,000 metres is planned and expected to commence in the last week of August 2021 and continue through the start of winter freeze-up at the end of October 2021. The Company's drill contractor has agreed to leave the drill rig onsite through to the end of April 2022, thus eliminating both the cost and possible delays that can result from a second mob/de-mob process.

For drillholes FMRS16-001 - FMRS16-008, FMRS16-011 drill core samples were split by rock saw with one half retained in the core box and remains on the Albert Lake property. The other half was placed in plastic samples bags with pre-numbered sample tags. All samples were transported to TSL laboratories in Saskatoon, SK by company personnel for assaying. TSL is a Standard Council of Canada Accredited Laboratory (538) and independent of Fathom. At TSL a multi-acid digestion followed by multi-element (41) ICP-MS analyses type of assay was utilized. Over limit Ni, Cu was assayed by Ore Grade - AA finish and select samples assayed for Pd, Pt, by 30g Fire Assay with ICP Finish. Fathom inserted certified blanks and standards at intervals consistent with industry standards into the sample streams of all samples collected for assay.

Drillhole FMRS16-009, FMRS16-010 drilled in 2016 for the purpose of a possible metallurgical study were assayed in 2021 at ALS. For drillholes drilled Q1 2021, drill core samples were split by rock saw with one half retained in the core box and remains on the Albert Lake property. The other half was placed in plastic samples bags with pre-numbered sample tags. All samples were transported to ALS receiving facility in Saskatoon and assayed at ALS Vancouver. ALS is an accredited laboratory ISO/IEC 17025; 2017 and independent of Fathom. All samples were assayed by a four-acid digestion (ME-ICP61), 33 elements, ICP-AES finish, overlimit Ni, Cu by ME-OG62, Pd, Pt and Au by Fire Assay (30g) PGM-ICP27 with ICP-AES finish. Full suite PGE analyses was performed at ALS facility Johannesburg, South Africa where palladium, platinum, rhodium, osmium, iridium and ruthenium was assayed by Nickel Sulphide Fire Assay Fusion followed by ICP-MS finish (PGM-MS25NS).

Fathom Nickel is a resource development and exploration company that is targeting high-grade nickel sulfide discoveries for use in the rapidly growing global electric vehicle market.

The Company is accelerating exploration on its flagship Albert Lake Project, host to the historic Rottenstone mine, which is recognized as one of the highest‐grade (Nickel, Copper, Platinum group metals) deposits of its type ever mined in Canada. The Albert Lake Project consists of over 90,000 ha of mineral claims located in the Trans-Hudson Corridor of Saskatchewan, which is home to numerous world-class mining camps.

This news release contains "forward-looking statements" that are based on expectations, estimates, projections and interpretations as at the date of this news release. Forward-looking statements are frequently characterized by words such as "plan", "expect", "project", "seek", "intend", "believe", "anticipate", "estimate", "suggest", "indicate" and other similar words or statements that certain events or conditions "may" or "will" occur, and include, without limitation, statements regarding the enhancement of the Company's geologic model and extending the areas of known mineralization and the Company's work towards defining a resource base. Such forward looking statements involve known and unknown risks, uncertainties and other factors which may cause the actual results, performance or achievements of the Company to be materially different from any future results, performance or achievements expressed or implied by such forward-looking statements. Such risks and other factors may include, but are not limited to, the results of exploration activities; the ability of the Company to complete further exploration activities; timing and availability of external financing on acceptable terms. The Company does not undertake to update any forward-looking information except in accordance with applicable securities laws.

NOT FOR DISTRIBUTION TO UNITED STATES NEWSWIRE SERVICES OR FOR DISSEMINATION IN THE UNITED STATES. ANY FAILURE TO COMPLY WITH THIS RESTRICTION MAY CONSTITUTE A VIOLATION OF U.S. SECURITIES LAWS.

1 The Saskatchewan Mineral Deposit Index #0958 reports that 26,058t grading 3.23% Ni, 1.63% Cu, 9.63 g/t Pd-Pt+Au was recovered from open pit mining 1965-1969. The reliability of this historical data cannot be confirmed by the Company. The resource extraction is not considered NI 43-101 compliant by the definition of a "mineral resource". However, as evidenced by the open pit mine existing on the property, mining has taken place.

To view the source version of this press release, please visit https://www.newsfilecorp.com/release/86675

Sign up to receive news releases by email for Fathom Nickel Inc. or all companies belonging to the Mining and Metals industry.