Dr. Maria L. Maccecchini, CEO of Annovis Bio, explained: "We previously reported that ANVS401 significantly increased speed, coordination and motor function in PD patients in this trial. We set up this study to measure the toxic cascade leading to nerve cell death and loss of function and its reversal in AD and PD. Since the study was powered to investigate changes in biomarker levels, not to demonstrate efficacy, we believe these results are that much more impactful."

"The results from the first cohort of 14 AD and 14 PD patients, show that the drug is effective in both diseases," stated Dr. Maccecchini. "Seeing efficacy in both patient populations supports our hypothesis that the impairment of axonal transport, the information highway of the nerve cell, affects nerve cells in the same way in both diseases. The toxic cascade in neurodegeneration begins with high levels of neurotoxic proteins, which impair axonal transport, increase inflammation and eventually lead to nerve cell death and permanent loss of cognition and function." 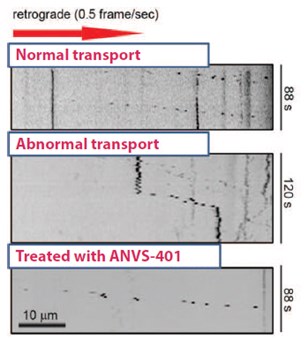 On the left (Figure 1) there are three pictures of axonal transport through an axon (arm) of a nerve cell. The first picture shows the axon of a normal healthy nerve cells: the black dots depict information packages which flow smoothly from the left to the right. In the middle is the arm of a sick nerve cell. The information packages stop, then move, then stop again. At the bottom, the same sick nerve cell is treated with ANVS401 and the information flow is re-established. This shows in a very visual way, how normalizing axonal transport increases the flow and re-establishes normal function.

Comparison to Other Studies

In 2019, Biogen reported the data from its EMERGE study, a double-blind, placebo-controlled large phase 3 study and showed an improvement of 1.4-points in ADAS-Cog13 over one year.

In February 2021, Cassava reported in an open-label phase 2 study a 1.6-point improvement in ADAS-Cog11 over six months.

With ANVS401 in a double-blind, placebo-controlled study, Annovis Bio is reporting statistically significant improvements in ADAS-Cog11; specifically, a 4.4-point improvement, when the same people are measured at baseline and 25 days later. We also see a 3.3-point improvement when at 25 days we compare placebo to treated in less than one month. While we do not know how ANVS401 will affect cognition after more than one month of treatment, the present results show promise that the drug may improve or stop the course of AD.

The safety profile of ANVS401 in the interim analysis was consistent with prior safety data that shows it to be safe at 80 mg once a day in humans. There were no adverse events that could have been ascribed to the drug treatment.

Annovis Bio's ongoing Phase 2a study is designed to treat a combined total of 68 patients for four weeks with the Company's lead compound, ANVS401. The first 14 PD plus 14 AD patients, whose data are reported here, have finished treatment and their biomarkers are being measured. Recently, Annovis Bio reported the results of the measurement of inflammation in the first 14 PD patients using four biomarkers. The last 40 patients are being treated with different doses to determine the optimal dose. The study compares, in both patient populations, how nerve cells die by measuring all the steps in the toxic cascade leading to nerve cell death and how ANVS401 reverses the toxic cascade and recovers normal brain and body function.

The cerebral spinal fluid and plasma samples of the 14 PD and 14 AD patients who completed treatment are continuing to be analyzed to measure the reversal of the toxic cascade with additional data expected to be reported in the next two months. The full study data, including a dose ranging analysis in 40 PD patients, is anticipated in July or August of this year.

Following completion of the Phase 2a trial, Annovis Bio will request a meeting with the FDA to present the results of the trial and its chronic toxicology study in animals. Annovis Bio believes today's data and prior clinical results support the potential advancement of ANVS401 into late-stage studies, which the Company is targeting in late 2021, assuming successful completion of its ongoing Phase 2a study.

Headquartered in Berwyn, Pennsylvania, Annovis Bio, Inc. (Annovis) is a clinical-stage, drug platform company addressing neurodegeneration, such as Alzheimer's disease (AD), Parkinson's disease (PD) and Alzheimer's in Down Syndrome (AD-DS). We believe that we are the only company developing a drug for AD, PD and AD-DS that inhibits more than one neurotoxic protein and, thereby, improves the information highway of the nerve cell, known as axonal transport. When this information flow is impaired, the nerve cell gets sick and dies. We expect our treatment to improve memory loss and dementia associated with AD and AD-DS, as well as body and brain function in PD. We have two ongoing Phase 2a studies: one in AD patients and one in both AD and PD patients. For more information on Annovis, please visit the company's website: www.annovisbio.com.

Statements in this press release contain "forward-looking statements" that are subject to substantial risks and uncertainties. Forward-looking statements contained in this press release may be identified by the use of words such as "anticipate," "expect," "believe," "will," "may," "should," "estimate," "project," "outlook," "forecast" or other similar words, and include, without limitation, statements regarding the timing, effectiveness, and anticipated results of ANVS401 clinical trials. Forward-looking statements are based on Annovis Bio, Inc.'s current expectations and are subject to inherent uncertainties, risks and assumptions that are difficult to predict. Further, certain forward-looking statements are based on assumptions as to future events that may not prove to be accurate, including that clinical trials may be delayed; that the data reported herein is interim data, conclusions as to which may be superseded by subsequent data we expect to receive in connection with Phase 2a trials and/or subsequent clinical trials; and that any anticipated meeting with or presentation to the FDA may be delayed. These and other risks and uncertainties are described more fully in the section titled "Risk Factors" in the Annual Report on Form 10-K for the year ended December 31, 2020 filed with the Securities and Exchange Commission. Forward-looking statements contained in this announcement are made as of this date, and Annovis Bio, Inc. undertakes no duty to update such information except as required under applicable law.

To view the source version of this press release, please visit https://www.newsfilecorp.com/release/84812

Sign up to receive news releases by email for Annovis Bio, Inc. or all companies belonging to the Biotechnology, Pharmaceuticals industries.