Vancouver, British Columbia--(Newsfile Corp. - May 18, 2021) -  Viscount Mining Corp. (TSXV: VML) (OTCQB: VLMGF) ("Viscount Mining") is pleased to announce it has completed the analysis of the recent geophysical and geochemical study at its Silver Cliff property in Colorado.

In early March, Viscount began the 2021 field season with joint geophysical and geochemical surveys. The surveys, conducted on the Kate extension of Viscount's Silver Cliff project, span an area that is oriented to the North-East and covers about 13 hectares. These surveys were done to examine the relationship between surface geochemistry and sub-surficial magnetics, and to investigate their usefulness in directing future drill programs.

The soil samples were gridded on 15-meter centers and lines were set 100 meters apart. Four lines were collected, each line containing 25 samples, for a total of 100 soil samples. A Geometrics G-858 MagMapper was used to collect continuous magnetometer readings over the same area. The soil samples were analyzed by SGS using a mobile metals isotopes (MMI) analytical procedure. This technique is especially well suited for buried strata bound deposits that exist at Silver Cliff. There are very few ore outcrops to guide the drilling at Silver Cliff. MMI measures the mobile metal ions that have been released from the mineralization and travels upwards towards the surface, then bond with unconsolidated materials such as sand, soil and dirt at the soil/ air interface. This helps to define locations of buried ore horizons. The MMI procedure was used by Snowden Consultants successfully as the method for soil sample analysis in their 2012 NI 43-101 document on Viscount's Cherry Creek property in Nevada. The figures below indicate the results of these geophysical and geochemical surveys. 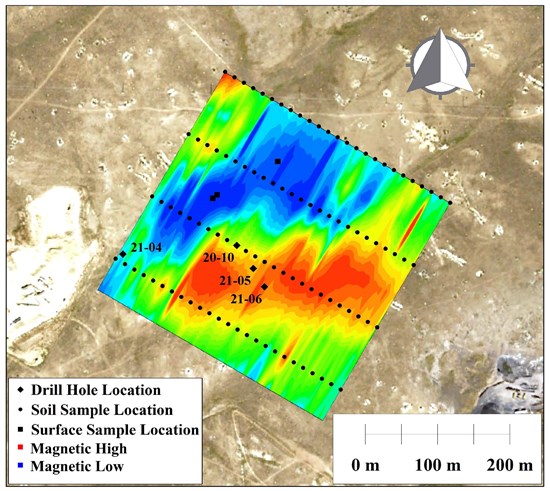 The color shaded areas on the map are the magnetometer responses in the survey area. The blue shades are magnetic low responses, the green and yellow represents intermediate responses, while the red shaded area are high responses. 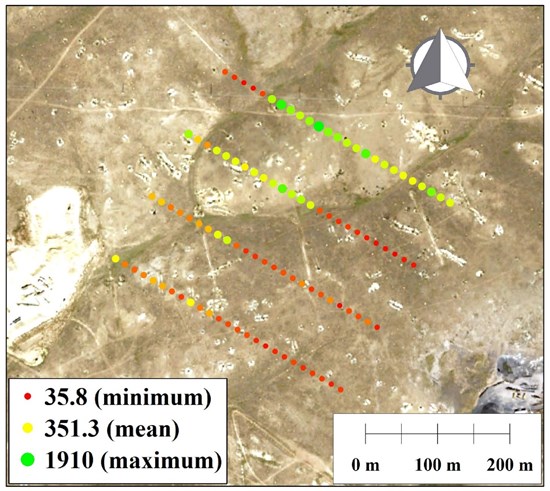 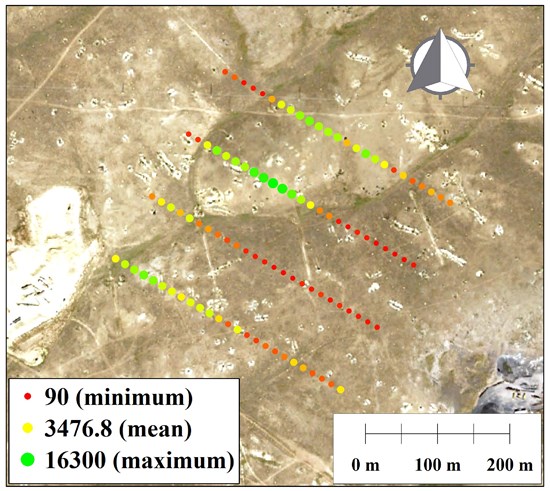 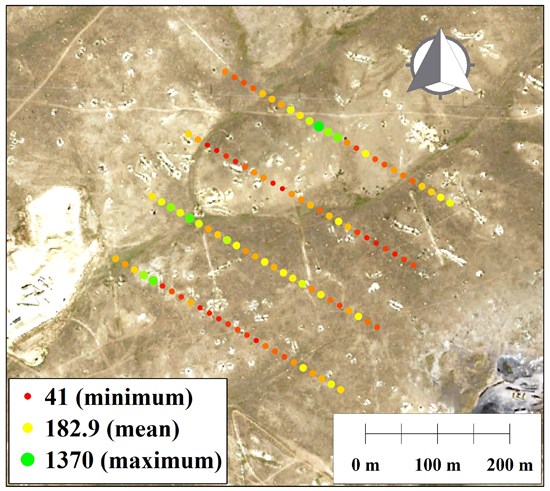 Higher concentrations of silver seem to appear at the surface above areas of lower magnetism. The concentration of silver in the soil correlates positively with zinc and lead, which is very similar to what we found in the analysis of the core from the 2020 drill program. This could be important pathfinder set of elements to guide drilling in the future. Five surface rock samples were collected in the survey area and the silver concentrations ranged from 31.1 to 280 g/t. Viscount drilled one hole in the survey area during the 2020 campaign. It is located in between the magnetic low and high fields and assayed 51.9 g/t over 19.4 meters.

Mark Abrams, Vice-President of Exploration stated "the soil sampling shows further evidence of the presence of the North-East trending zone that was noticed after the 2020 drill program. Three core holes from the 2021 spring drilling campaign, completed in April, are located within the area of geophysical analysis. Drill hole 21-04 was drilled in a magnetic low region, and the drill holes 21-05 and 21-06 were drilled in a magnetic high region. This should aid in further understanding the relationship between surficial and sub-surficial geochemistry of the Kate area. These results should help determine if either the MMI procedure or collection of magnetometer readings could be a vital resource for the guiding of future drill programs."

Viscount anticipates starting Phase III of this drill program in the summer 2021. The program will be focusing on the discoveries of Phase 2 and concentrated on expanding the Kate Silver Resource to the North. Based on the results of the 20/21 drill program, Viscount will be commissioning an update to its current 43-101 resource.

An internal report from CoCa Mines in 1983, estimated a potential resource of 40 million short tons at the Passiflora, based on 14 drill holes (not NI 43-101 compliant), with the best intercept reporting to be 256 g/t silver and 1.4 g/t gold.

Tenneco Minerals leased the Kate property in 1987. They had the previous drill data available to them, which was the results from 11,930 meters in 249 drill holes that had been done since 1968. The following two years Tenneco drilled an additional 143 holes totaling 7,949 meters. Based on the accumulated data and a feasibility study, Tenneco Minerals made the decision to construct a $35,000,000 milling operation for the extraction of the silver reserves at Silver Cliff. Shortly thereafter Tenneco decided to sell the minerals division, and the planned milling operation was abandoned.

To view the source version of this press release, please visit https://www.newsfilecorp.com/release/84353