"Phase II drilling has confirmed our hypothesis that drilling known veins along strike will result in an expansion of the current resources and define the Virginia Project as a significant silver project. As a result of the spectacular assays at Ely Central (including EC-DDH-001 intersecting 10.8m at 625 g/t Ag, including 5.7m at 1,110 g/t Ag) we can now see the potential for the Ely zones to extend to over 1.3 km along strike length," commented Silver Sands CEO Keith Anderson.

"At Ely Central we have now delineated 200 m of continuous silver mineralization. Additionally, a large, highly prospective, 280m-long untested "gap" in the Ely structure exists to the south of EC-DDH-004 and a highly prospective, 120m-long untested "gap" in the structure exists to the north of EC-DDH-005 (see Figures 1 and 2). Ely Central is located between the Ely North conceptual open pit and Ely South conceptual open pit from the 2016 resource," he continued.

"On top of our drilling success, we see significant resource expansion potential to the northeast, where the Phase II IP survey previously released shows a completely new area of potential mineralization to the North-East with very similar signatures to the Ely and Naty structures. We are also very excited about the area NE of the resource, where IP geophysics has highlighted several potential structures that may host mineralization at depth. So far almost all of our 2016 resources are located close to surface (0 to 150m), while other operating mines within the Deseado Massif, including those closer to Virginia are producing from veins at depths up to 400m. We continue to work toward an updated resource estimate late H2 2021 and are sufficiently funded to complete a Phase III drilling program and complete the resource estimate," he concluded. 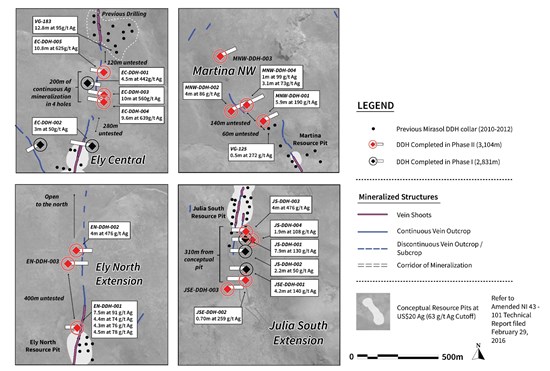 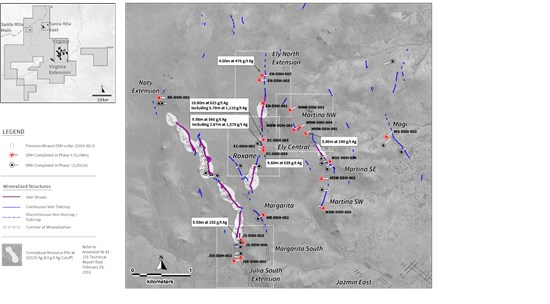 Ely Central Target:
A newly emerging 200m open ended strike length of strong silver mineralization has been discovered at Ely Central and lies within a 580m "gap" left untested from the original drilling at Virginia by Mirasol in 2012. This new zone is currently defined by Phase II holes EC-DDH-003, EC-DDH-004, EC-DDH-005 and hole EC-DDH-001 completed in Phase I.

It is also encouraging to note these strongly silver mineralized drill intersections at Ely Central are hosted in a more subdued gradient array induced polarization ("IP") chargeability response, as opposed to the typical strong chargeability responses associated with the current resource areas. This weaker IP response may represent the upper levels of the mineralized structure, and potentially help vector to a stronger IP response and mineralization at a greater depth, and below the current 125-150m depth range of the current gradient array IP survey. Furthermore, with significant silver mineralization now directly associated with these lower-level IP anomalies, additional areas with similar responses throughout the Virginia vein field will be reviewed as they may become higher ranked and valid drill targets to test in subsequent drill campaigns. 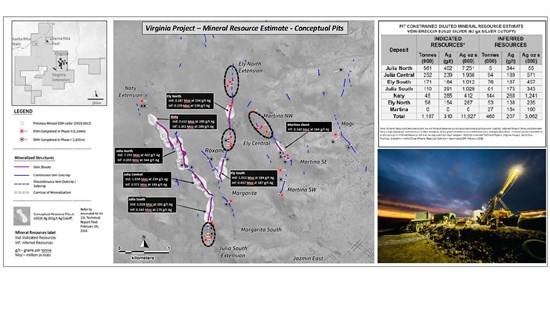 Ely North, which currently represents the northern most known extension along the same structure from Ely Central, also returned encouraging intersections of silver mineralization. Hole EN-DDH-001 was collared 70m north of the Ely North conceptual resource open pit and intersected highly anomalous silver mineralization within a fault zone between 30-50m downhole. This fault zone hosts repetitive zones of silica hematite matrix breccia with matrix supported quartz clasts with a range of silver values between 66 and 91 g/t silver with an overall average of 75 g/t silver. A narrow select sample, not included in the above average, was sourced from the lower contact of one of these hematite-rich hydrothermal breccias which contained well coliform/crustiform banded epithermal vein clasts and returned an elevated value of 156 g/t silver over a narrow width of 0.33m. These anomalous silver grades associated with the mineralized banded quartz clasts in the silica-hematite matrix breccias are regarded as particularly encouraging and are valuable as geochemical vectors to the higher grade zones along and within these structures.

Continuing north from EN-DDH-001 through an untested "gap" of 400m hole EN-DDH-003 encountered a low although anomalous value of 0.6m at 67 g/t silver from a narrow structure, interpreted not to be part of main structure. Of higher significance, hole EN-DDH-002, located just 70m north of EN-DDH-003, returned 4.0m at 476 g/t silver including 1.85m at 929 g/t silver, from silica-hematite hydrothermal breccias, that appear to be from the same mineralized fault zone encountered in hole EN-DDH-001. It may be concluded that EC-DDH-003 did not hit the main structure, whereas EC-DDH-002 did and it is encouraging to see that the silver values are increasing in the northern most extensions of the Ely North structure. It is also important to note that the structure remains open and untested from this point north.

The structure at Ely North, is characterized by fault zone hosted hydrothermal breccias with mineralized quartz vein fragments, very similar to those present at Ely Central. Both step-out and deeper drilling will be required in this area to test for the higher-grade epithermal vein structures.

At Martina NW, hole MNW-DDH-001 encountered an encouraging intersect of 5.90m with 190 g/t silver including 1.52m at 300 g/t silver and 1m at 212 g/t silver. This hole indicates that a strong potential for significant silver mineralization along the Martina trend exists further to the northwest along the same structure that hosts the Martina resource pit 300m to the southeast. Hole MNW-DDH-001 was collared in a 200m untested "gap" along the Martina structure. Previous holes VG-125 lies 55m southeast where drilling encountered 0.5m at 272 g/t silver. It is encouraging to see the increase in width of the mineralized structure in MNW-DDH-001 as the structure extends to the northwest.

At Julia South, the recent holes from both Phase I and Phase II indicate a strong potential for significant silver mineralization along the Julia South structural trend exists further to the south of the current Julia South conceptual resource pit. Recent hole JS-DDH-003, which is located approximately 70m to the SE of the Julia South conceptual resource pit, intersected an encouraging zone of 5.5m at 192 g/t silver. This could potentially represent a parallel structure to the east of the main Julia South structure, where previously reported Phase I hole JS-DDH-001 intersected 3.9m at 168 g/t silver. Further drilling will be required to fully understand this structure. Hole JSE-DDH-002, located 310m directly south of the current Julia South conceptual resource pit resource returned an encouraging, although narrow, intersection of 0.7m at 259 g/t silver hosted in a strongly silicified fault zone with hematitic micro-fractures and silica stockworks. Hole JSE-DDH-003, located 110m west and 60m south of JSE-DDH-002 also returned a narrow but higher grade intersection of 0.4m at 360 g/t silver. These two intersections may represent separate parallel structures but indicate that the mineralization continues further south. Follow-up drilling will be important to determine the significance of these recent intersections.

Virginia is a low to intermediate sulphidation epithermal silver deposit located in the mineral-rich Deseado massif, lying within the mining-friendly state of Santa Cruz in the Patagonia region of Argentina. Through initial discovery in 2009 to four drill programs between 2010 and 2012, Mirasol Resources was able to define an initial indicated mineral resource of 11.9 million ounces of silver at 310 g/t Ag and a further inferred 3.1 million ounces of silver at 207 g/t Ag within seven outcropping bodies. This resource is documented in a Mirasol Resources technical report entitled: "Amended Technical Report, Virginia Project, Santa Cruz Province, Argentina -- Initial Silver Mineral Resource Estimate" with an effective date of Oct. 24, 2014, and a report date of Feb. 29, 2016.

Silver Sands is earning a 100-per-cent interest in Virginia by issuing sufficient shares for Mirasol to end up with 19.9 per cent of the issued and outstanding of Silver Sands and completing $6-million (U.S.) in exploration over three years. Mirasol will retain a 3-per-cent net smelter return royalty with Silver Sands having the option of purchasing one-third of the royalty for $2-million (U.S.).

Silver Sands is a well-financed, Canada-based company engaged in the business of mineral exploration and the acquisition of mineral property assets in mining-friendly jurisdictions. Its objective is to locate and develop economic precious and base metal properties of merit. Its key asset is the Virginia silver project, located in the mining-friendly Santa Cruz state of Argentina.

Qualified Person Statement: Silver Sand's disclosure of technical and scientific information in this press release has been reviewed and approved by R. Tim Henneberry, P.Eng., a director of the Company, who serves as a Qualified Person under the definition of National Instrument 43-101.

QAQC: Silver Sands applies industry standard exploration sampling methodologies and techniques. All geochemical rock and drill samples are collected under the supervision of the company's geologists in accordance with industry practice. Geochemical assays are obtained and reported under a quality assurance and quality control (QA/QC) program. Samples are dispatched to an ISO 9001:2008 accredited laboratory in Argentina for analysis. Assay results from channel, trench, and drill core samples may be higher, lower or similar to results obtained from surface samples due to surficial oxidation and enrichment processes or due to natural geological grade variations in the primary mineralization.

Forward Looking Statements: The information in this news release contains forward looking statements that are subject to a number of known and unknown risks, uncertainties and other factors that may cause actual results to differ materially from those anticipated in our forward-looking statements. Factors that could cause such differences include: changes in world commodity markets, equity markets, costs and supply of materials relevant to the mining industry, change in government and changes to regulations affecting the mining industry and to policies linked to pandemics, social and environmental related matters. Forward-looking statements in this release include statements regarding future exploration programs, operation plans, geological interpretations, mineral tenure issues and mineral recovery processes. Although we believe the expectations reflected in our forward-looking statements are reasonable, results may vary, and we cannot guarantee future results, levels of activity, performance or achievements. Silver Sands disclaims any obligations to update or revise any forward-looking statements whether as a result of new information, future events or otherwise, except as may be required by applicable law.

Neither the Canadian Securities Exchange ("CSE") nor its Regulation Services Provider (as that term is defined in the policies of the CSE) accepts responsibility for the adequacy or accuracy of this release.

To view the source version of this press release, please visit https://www.newsfilecorp.com/release/84204

Sign up to receive news releases by email for Silver Sands Resources Corp. or all companies belonging to the Mining and Metals, Precious Metals industries.