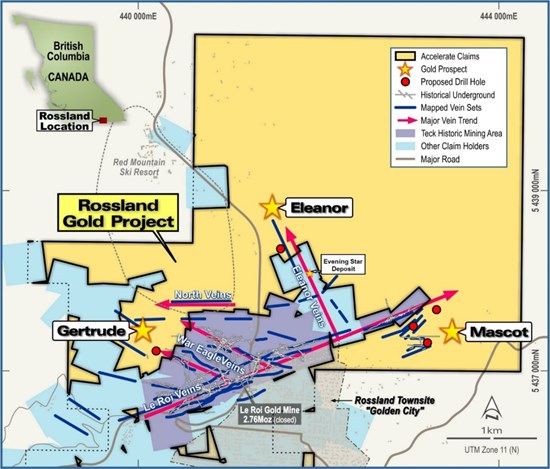 "The funding by Accelerate has enabled Currie to complete our first drill program at Rossland and whilst the results of our final hole reported today are disappointing, the results from our first drill hole at the Novelty target were exceptional with multi-element returns, confirmed strong gold mineralisation.

"The drilling has also focussed our attention to the Gertrude area and we have taken the decision to reduce our working footprint and will focus our efforts on the Gertrude Prospect where our VLF-EM geophysical survey and other associated historical data remains a high priority location."

Mr Griffiths also commented that, "Accelerate have shown strong belief in management and we look forward to having Accelerate as a major shareholder."

Having concluded their Due Diligence expenditure, Accelerate have given Notice that they will not proceed with the transaction to acquire the Rossland Project and, in accordance with our Term sheet dated 1st September 2020, Accelerate has elected to convert their CAD$500,000 Loan to equity in Currie Rose. Subject to regulatory approval, Currie will issue 8,333,334 fully paid ordinary shares in the capital of Currie Rose to Accelerate at a deemed issue price of $0.06 per Currie Rose Share.

Accelerate will hold approximately 16.6% of Currie and will have no ongoing interest in the Rossland Gold Project.

The exploration program set out to test the three identified primary gold targets located in the northern section of the Rossland Gold Project area (Figure 1):

A total of 747.32m of Diamond Drilling (DD) was completed at the Gertrude (Novelty Target) and Mascot Prospects, with most of the drilling (686.71m) drilled at Mascot (Table 2). Planned drilling at the main Gertrude and Eleanor Prospects were postponed due to the unseasonal early arrival of heavy snow and additional unplanned access issues.

A total of 60.6m of NQ2 diamond core was drilled at the Novelty target which forms part of the Gertrude Prospect (Figure 2) located in the north western section of the Rossland Gold Project. Twenty-eight samples were selected for assay with drilling successfully intersecting high grade gold with accessory cobalt and silver. (See Table 1 below).

The Mascot Prospect drilling results returned no significant results. The best gold intersection came from RGP20-003 which returned 0.2m 7.41g/t Au and 2.19g/t Ag from 173.03m (Table 1). No further work is planned on the Mascot Prospect.

Hole RGP20-004 targeted a strong +200m VLF-EM anomaly and the convergence of the historically exploited East to North-North-East gold veins that include the Columbia-Kootenay Vein, Kapai Vein and the Mascot North Vein (Figure 2).

The hole intersected a sequence of diorite and feldspathic porphyry's, interbedded with monzonite and volcanogenic sediments. Unfortunately, the drilled target zone was dominated by cross-cutting north-south trending lamprophyre dikes (which are common in the "Mine Series" at the Le Roi) and historically observed to consume the older mineralised zones.

Hole RGP20-004 has not fully tested the strong VLF-EM anomalism and the gold vein convergence and the target remains open.

The Company will now concentrate on the Gertrude- Novelty Prospect and expects to re-start exploration activity in 3rd quarter 2021. 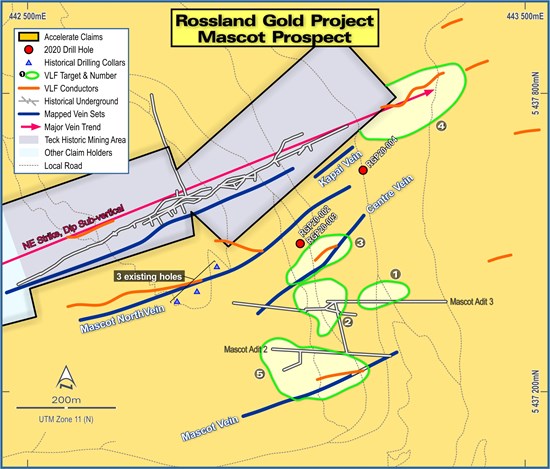 Our current projects span British Columbia and Ontario with our immediate focus on the Rossland Project in BC. Please visit our website located at www.currierose.com.

Drill core samples were transported in security sealed bags for analyses to MSALABS in Vancouver, British Columbia. Individual samples are labelled, placed in plastic sample bags, and sealed. Groups of samples are then placed into durable rice bags and then shipped. The samples transported to MSALABS were dropped in rice bags with security seals by Overland West. The remaining coarse reject portions of the samples remain in storage if further work or verification is needed. Currie has implemented a quality-control program to comply with best practices in the sampling and analysis of drill core. As part of its QA/QC program, Currie inserts external gold standards (low to high grade) and blanks every 10 samples in addition to random standards, blanks, and duplicates. A Fire Assay, 50g fusion, Gravimetric analysis of all samples over 10 g/t gold or the samples with abundant visible gold. Check assays are routinely performed on samples with visible gold to ascertain the mineralization zone's gold content.

The Currie Rose scientific and technical information in this news release has been prepared in accordance with the Canadian regulatory requirements set out in National Instrument 43-101 (Standards of Disclosure for Mineral Projects) and reviewed and approved on behalf Currie Rose Resources by Michael Griffiths, FAusIMM, President & CEO for Currie Rose Resources, a Qualified Person.

This news release may contain forward-looking statements that are based on the Company's expectations, estimates and projections regarding its business and the economic environment in which it operates. Statements about the closing of the transaction, expected terms of the transaction, the number of securities of Currie Rose that may be issued in connection with the transaction, and the parties' ability to satisfy closing conditions and receive necessary approvals are all forward-looking information. These statements are not guarantees of future performance and involve risks and uncertainties that are difficult to control or predict. Therefore, actual outcomes and results may differ materially from those expressed in these forward-looking statements and readers should not place undue reliance on such statements. Statements speak only as of the date on which they are made, and the Company undertakes no obligation to update them publicly to reflect new information or the occurrence of future events or circumstances, unless otherwise required to do so by law.

To view the source version of this press release, please visit https://www.newsfilecorp.com/release/82327

Sign up to receive news releases by email for Currie Rose Resources Inc. or all companies belonging to the Mining and Metals, Precious Metals industries.