Vancouver, British Columbia--(Newsfile Corp. - April 15, 2021) - Riverside Resources Inc. (TSXV: RRI) (OTCQB: RVSDF) (FSE: 5YY) ("Riverside" or the "Company"), is pleased to release its first batch of drill results from the Cecilia Project, Sonora Mexico. The program consisted of a total of seven (7) drill holes, out of which results have been received for five (5) holes so far as reported below. Anomalous gold mineralization was intersected in all five drill holes, with the best intercept being 24.2 m of 1.51 g/t Au starting from only 2.30 m downhole at the North Breccia Target (CED21-005). A further 8.9 m of 0.64 g/t Au intercept was cut near end-of-hole starting from only 40.35 m. Assays remain pending for another slightly deeper drill-hole at the North Breccia Target (see Figure 1). This first phase drill campaign included mostly shallow drill-holes, which successfully demonstrate a well-developed hydrothermal system near surface, with significant room to extend mineralization both laterally and to greater depths with subsequent drilling.

Riverside is acting as operator on the project as part of the option agreement with Carlyle Commodities (see press release July 15, 2020). Riverside completed field work and geophysics in 2020 that helped refine targets in advance of this initial drill campaign, and the Company looks forward to additional assay results in the coming weeks and follow up drill plans will be determined once all results have been received and interpreted.

Riverside's President and CEO, John-Mark Staude: "We are very pleased with this first batch of samples. The results show continuity of mineralization at shallow depths and further drilling is certainly warranted to extend known near-surface mineralization at North Breccia and test at greater depth at San Jose where the first ever 4-holes all encountered gold mineralization and point to strong potential at slightly greater depths. Cecilia is target-rich, with 10 defined target areas providing excellent discovery potential beyond these initial targets that were tested during this first phase of drilling. We look forward to receiving the next batch of results which will give us insight and potentially vector us toward a larger volume deeper into the system."

Table 1: First assays received from the North Breccia drilling, including two intercepts. Summary of additional results are listed further below in table 2.

Notes: Cut-off grade used for calculating intervals is 0.2 g/t Au. All reported intercepts are downhole lengths (estimate true width will be determine with the hole CED21-006, for which logging indicate a zone of interest of about 4 meters. 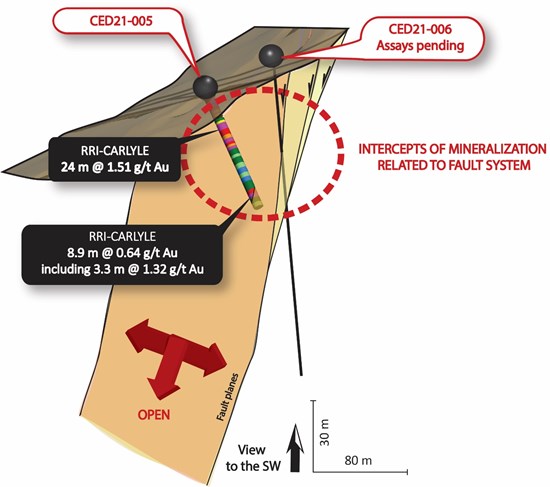 Figure 1: 3D section of the drilling at North Breccia target from Riverside and Carlyle exploration program. Hole 005 has intersected the fault system and shows extent of mineralization with relation to the fault system. Mineralization corresponds to a combination of breccia, fault and strong silicification.

The first drill program from Riverside and Carlyle was focused on targeting the hydrothermal system identified at two principal elevations: 2,200 m and 1,900 m, respectively corresponding to the San Jose Target and the North Breccia Target. By doing so, Riverside's team was able to test the continuity of the mineralized structures at shallow depth. 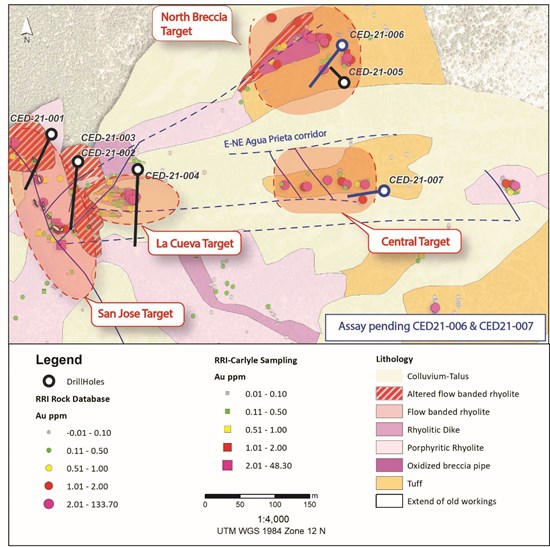 A total of 3 holes were drilled into the San Jose Target (CED21-001, 002, 003) and 1 hole (CED21-004) to test the La Cueva Target identified as the northeastern structural junction with the east-west Agua Prieta structural corridor including the North Breccia Target and the Central Target as shown in Figure 2.

The San Jose Target was originally identified from a historical working that included extensive tunnels up to 80 m deep and stopes, for which the extent is not known. Previous sampling taken from the stope wall during 2020, returned high grades up to 48 g/t Au in a sawcut channel sample over 0.75 m. Results from drilling show a wide interval of lower grade enveloping high-grade pods at shallow depths. The drilling at San Jose finds extensive and intensive silicification which appears to be the upper zones of low sulfidation epithermal fluids which could be the upper distal outflows from potentially gold rich veins below. This type of alteration is found in other epithermal centers in Sonora, Mexico and the results so far are favorable for this target.

Drill core shows the mineralized zone identified in the drill holes is primarily concentrated within fault zones and is associated with moderate to intense silicification. The fault system extends to depth and so far, appears to become a lot wider which is also reflected in the grade thicknesses. The San Jose target was never drilled prior to this program. Drilling so far suggests the structures are widening at depth and warrant additional drilling. 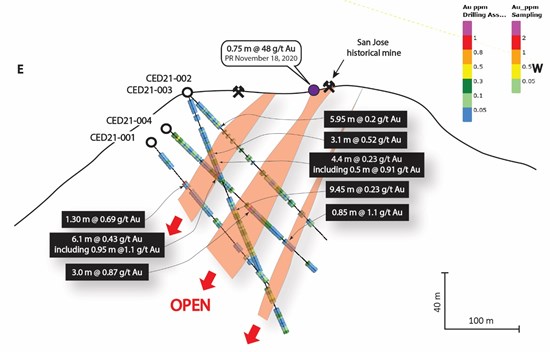 Figure 3: Simplified cross section of the San Jose target. The cross section includes all 4 drill holes compiled into one section, which can be misrepresenting the actual thickness on the figure (see Table 2 for list of main intercepts).

The scientific and technical data contained in this news release pertaining to the Cecilia Project was reviewed and approved by Freeman Smith, P.Geo, a non-independent qualified person to Riverside Resources, who is responsible for ensuring that the geologic information provided in this news release is accurate and who acts as a "qualified person" under National Instrument 43-101 Standards of Disclosure for Mineral Projects.

Riverside completed a QA/QC program as part of the drilling program with about 10% of the samples assayed being control samples. Standards and blanks were inserted approximately every 20 samples and duplicates every 30 samples. Some of blanks in Hole #4 assays with trace amounts of gold suggesting some contamination did occur in hole 4. Hole 5, the hole with the better intersects did not appear to be compromised and the blanks show positive results.

Rock samples from the previous exploration programs discussed above at Cecilia were taken to the Bureau Veritas Laboratories in Hermosillo, Mexico for fire assaying for gold. The rejects remained with Bureau Veritas in Mexico while the pulps were transported to Bureau Veritas laboratory in Vancouver, BC, Canada for 45 element ICP/ES-MS analysis. A QA/QC program was implemented as part of the sampling procedures for the exploration program. Standard samples were randomly inserted into the sample stream prior to being sent to the laboratory.

Riverside is a well-funded exploration company driven by value generation and discovery. The Company has no debt and less than 71M shares outstanding with a strong portfolio of gold-silver and copper assets in North America. Riverside has extensive experience and knowledge operating in Mexico and Canada and leverages its large database to generate a portfolio of prospective mineral properties. In addition to Riverside's own exploration spending, the Company also strives to diversify risk by securing joint-venture and spin-out partnerships to advance multiple assets simultaneously and create more chances for discovery. Riverside has additional properties available for option, with more information available on the Company's website at www.rivres.com.

To view the source version of this press release, please visit https://www.newsfilecorp.com/release/80515