Thus far, 46 holes have been drilled as part of the 17,500-meter Phase II Resource Definition drill program at Kaukua South, including today's results, 29 have been released, while results for 17 holes are pending. The program's goal has been to define the mineralization from surface to a depth of only 200 metres over the known 4-kilometer strike length of Kaukua South. In total 9,220 meters have been drilled to date as part of the Phase II program. Drilling is currently in hiatus for the spring thaw and is schedule to resume in mid-May.

Derrick Weyrauch, President and CEO of Palladium One, said, "Drilling at Kaukua South continues to intersect impressive grades and widths, and as evidenced by hole LK21-061 these results also extend to depth. Induced Polarization (IP) surveys along the east and west extensions of Kaukua South have now been completed and we expect preliminary results shortly. The current hiatus in drilling will be used for modelling and target generation on these new extensions"

Kaukua South infill drilling continues to demonstrate consistent open pit grades and widths. A total of 29 holes from the Phase II infill drill program on Kaukua South have now been released with intersections such as 47 meters at 2.6 g.t Pd_Eq in hole LK21-045 (see press release March 18, 2021) and 53 meters at 2.1 g/t Pd_Eq*, in hole LK20-028 (see press release January 18, 2021). These 29 holes cover approximately 2 kilometers of the Kaukua South Zone and have returned similar widths and grades to those in the Kaukua NI43-101 Open Pit resource estimate. (Figure 1 and 2).

As the Phase II infill drill program progresses the importance of the Upper Mineralized Zone at Kaukua South is taking shape. Kaukua South consists of two subparallel mineralized zones, the very continuous "Lower Zone" near the base of the Intrusion which is very similar to the Kaukua deposit with high PGE tenors and is the main focus of the current drill program. The "Upper Mineralized Zone" occurs in the hanging wall to the Lower Zone and is characterised by higher Cu-Ni values and lower PGEs (Table 1). The Upper Zone is typically lower grade and more sporadic than the Lower Zone but can exhibit greater widths (Figure 3). It's position in the hanging wall relative to the Lower Zone is key, its presence has significant positive implications for the open pit potential of Kaukua South as it could reduce the strip ratio and allow an open pit to extend to greater depths than originally contemplated and thereby improve overall project economics.

As such, the Company has revisited and is planning to increase the average drilling depth at Kaukua South in areas with strong Upper Zone mineralization. The revised plan now targets the Lower Zone down to a 300-meter depth compared to the original 200-meter depth target.

The current IP surveys to the west and east of the existing 4-km Kaukua South zone have been completed and preliminary results are anticipated in the coming weeks. The hiatus in the drilling due to the spring thaw will be used to analyse this new data and generate targets to expand the Kaukua South zone. IP has proven to be highly successful at outlining palladium-rich disseminated copper-nickel sulphide mineralization on the LK Project. The discovery of Kaukua South in an overburden covered area with no previous drilling was a direct result of the Company's 2020 IP survey. The Company believes there is potential to extend the currently Kaukua South IP chargeability anomaly from the currently defined four to over seven kilometres of strike length (Figure 1). 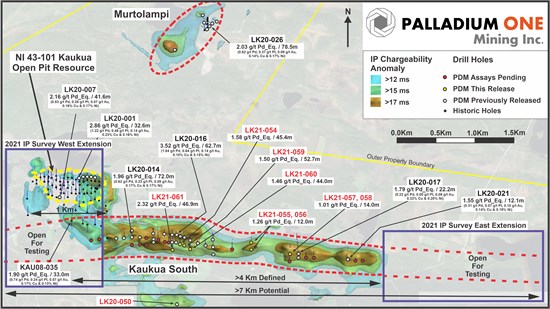 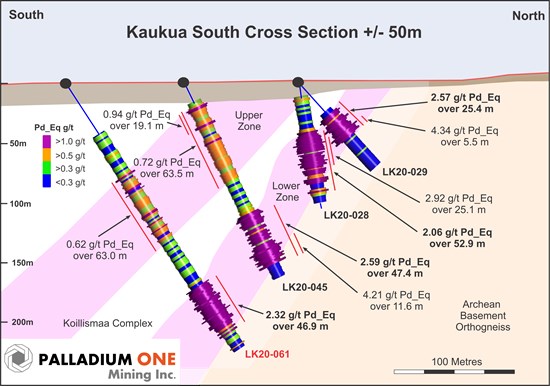 Palladium One Mining Inc. is an exploration company targeting district scale, platinum-group-element (PGE)-copper nickel deposits in Finland and Canada. Its flagship project is the Läntinen Koillismaa or LK Project, a palladium dominant platinum group element-copper-nickel project in north-central Finland, ranked by the Fraser Institute as one of the world's top countries for mineral exploration and development. Exploration at LK is focused on targeting disseminated sulfides along 38 kilometers of favorable basal contact and building on an established NI 43-101 open pit resource.

To view the source version of this press release, please visit https://www.newsfilecorp.com/release/80493