Deep breaths. One foot in front of the other. I'm ascending a section of the Kumano Kodo, a network of ancient roads that run through the mountains of Japan's Kii Peninsula. A canopy of cedars towers above me. The stones that comprise my path have been worn smooth after centuries under the feet of spiritual pilgrims and other travelers. Surrounded by lush ferns, I pause for a sip of water, and that's when I noticed it. The quiet. The peaceful, enveloping stillness. It had been a long time since I had experienced silence like that, something so far removed from the noise of trains and sirens and sidewalk chatter. In that moment, only an otherworldly calm, but something else as well. Something more. I had just registered the sensation when I broke the silence with another deep breath. 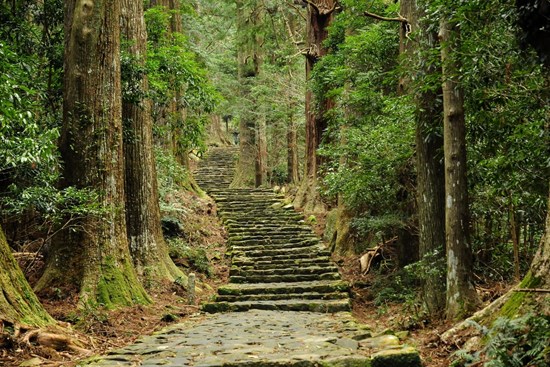 Steps along a stretch of the Kumano Kodo pilgrimage route in Wakayama Prefecture. (Image: Jason A Jenkins)

As if in response, a breeze rushed through the branches above me. Then a bird chirped. Suddenly, I was back on the steps of the Kumano Kodo again, but where had I gone? For a second there I genuinely felt like I was somewhere else. It's astonishing that a place like Wakayama is only a few hours from the cosmopolitan cacophony of Tokyo and other urban centers, but there I was, drinking in the silence and fresh air like a potent elixir, entranced. The next sound was a ping from my phone. I hadn't turned it off. That was quickly remedied, and I was back walking the path. I would check the message when I returned to the office later that afternoon - well, when I returned virtually, that is.

The pandemic is making many in the corporate world reassess both how and where we work. Enter the "workcation." More than ever before, Japanese businesses are finally reading the research showing that many employees are happier and more productive when removed from a calcified office routine - at least occasionally. All they need is a quiet space with a reliable internet connection. Wakayama, I've discovered, has plenty of both, and much more. Nature lovers will find beautiful beaches and stunning forest trails. Culinary travelers can sample everything from fresh seafood to wild game. History buffs can follow in the footsteps of monks, emperors and pirates. Then of course there is the appeal of clocking out to step onto a beach or into an onsen. Wakayama ticked all the right boxes for me. In only a few days, I was able to refresh and immerse myself into a different pace of life without disconnecting from my job. 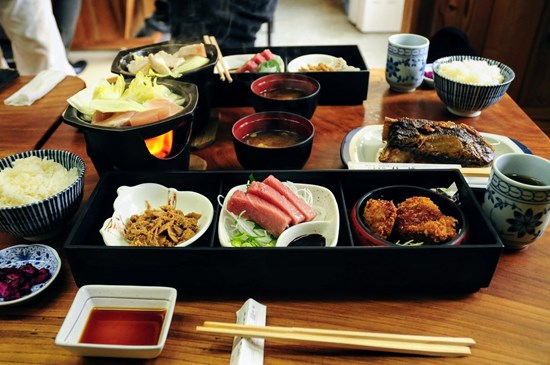 I started my workcation experiment in Shirahama, a beach town on Wakayama's southwest coast best known for its white sand and hot spring resorts. We stopped for lunch at Pizzeria Pescatore, a cozy family-run place specializing in wood-fired pizza and pasta dishes covered in local seafood. Later we indulged in single-origin coffee and homemade desserts at Mamenoyu. Built into an old refurbished storehouse, Mamenoyu is the kind of hip cafe where staff take holidays together. Every year, there's a vote on where they will go. When they return, there are new additions to the cafe, such as menu ideas from Vietnam or cutlery from a flea market in Paris. 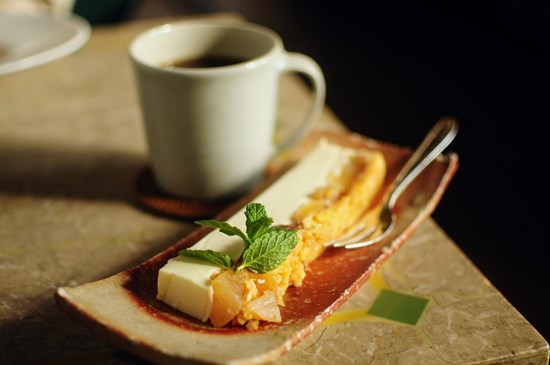 Coffee and homemade cheesecake with apple crumble at Mamenoyu. (Image: Jason A Jenkins)


From here we followed the rugged coastline to the Senjojiki Rock Plateau. Over millennia, powerful winds and waves carved this stretch of stone into undulating lines and rounded corners. A few minutes away is the Sandanbeki Rock Cliff. It's a 50-meter drop from the top to the waves below, but for a small fee you can take an elevator down to the water line and walk through caves that once hid the boats of 12th-century pirates. As the sun began to set, we dropped by Saki-no-yu Onsen for a soak. Saki-no-yu is considered one of the oldest onsen in Japan. These rotenburo (outdoor baths) are built into the rocky coastline facing the Pacific Ocean, so as the tide rises you can feel the spray of waves crashing in front of you. 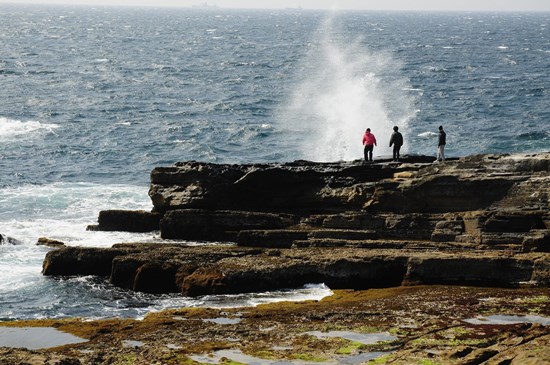 Once night falls, we check into Shirahama Key Terrace Hotel Seamore, a spacious, sumptuous onsen hotel with a modern, minimal design. From the lobby I am a few steps from a business center, an in-house bakery, several drinking and dining options and a relaxing outdoor foot bath. One of the dining options is Ikesu Warouda, the hotel's modern homage to traditional Japanese cuisine. Among the items we tried that evening were tempura, simmered abalone and lobster sashimi, which we washed down with a few bottles of Kuroushi, a dry junmai sake brewed just south of Wakayama City. After dinner I sat in one of the lounge areas and fired off some emails before putting my laptop away for the night and heading to the hotel's cavernous onsen floor with its shampoo bar (10 choices during my visit) and floor-length windows facing the sea. For longer stays, the adjoining Seamore Residence buildings have laundry and kitchen facilities as well as rooms that sleep up to four. This also gives you easy access to Shirahama Key Terrace Hotel Seamore facilities such as those mentioned above, as well as bicycle rental and a BBQ patio. 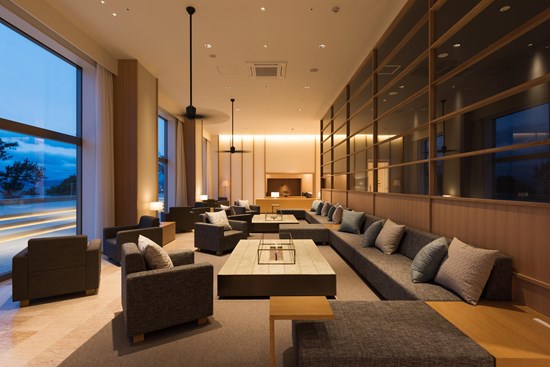 The next morning we were off to the Nanki Kumano Geopark Center, where I learned how ancient tectonic shifts formed many of the area's striking rock formations. Perhaps the most iconic of these is the Nachi Waterfall, the longest single-drop waterfall in Japan. Like the Nachisan Seiganto-ji Temple it faces, both the stone and water that comprise Nachi Waterfall have been considered holy ground for centuries, and it's easy to see why. There is something somewhat supernatural about the land here, and I'm sure that close exposure to the results of volcanic artistry could give you a unique connection to the land. I'm not a particularly religious guy, but when I stand in front of geological marvels like those found here, I can understand why today's residents and their ancestors have wanted to stay on the good side of these geological deities. It's not hard to feel a connection to the ancient just about anywhere in Japan, but the noise and velocity of urban life can weaken the link. 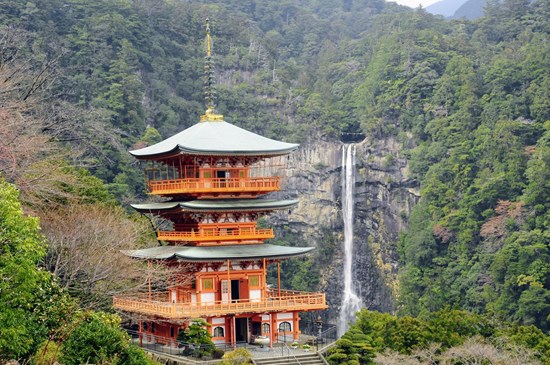 The beauty of Wakayama's otherworldly charm is that despite feeling remote, I still have access to good food and reliable internet. Here I can eat some of the freshest tuna at Katsuragi, a small mom & pop place right across from the port where much of the region's catch is hauled in. Then that evening we moved to Kawayu Midoriya, a cosy traditional hotel hugging the banks of a river that runs directly over geothermal waters. The indoor onsen was nice, but I preferred Kawayu Midoriya's unisex tubs by the river where I could watch the steam bubble from the waters and mingle with the mountain fog seeping out of the treeline. 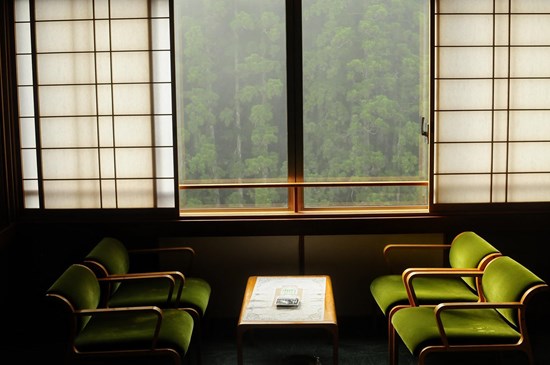 The view from my room in Kawayu Midoriya. (Image: Jason A Jenkins)

For my last day in Wakayama, I planned to walk more of the Kumano Kodo. If this wasn't a working holiday then I might spend a few days on the trail with Alena Eckelmann, a German guide who fell in love with the area ten years ago and now lives in a nearby village. Yet with our schedule, Eckelmann makes sure we experienced several beautiful stretches without the need of boots and hiking poles. With or without a guide, the Kumano Hongu Heritage Center is an excellent source of information and an ideal spot to learn more on a rainy day. It was there that I learned of the Kumano Kodo's connection to the Camino de Santiago in Spain. Where the paths of the Camino serve as a spiritual journey for Catholics and others in the Christian faith, the Kumano Kodo has long been a pilgrimage for followers of Shintoism and Buddhism alike. In fact, now there is a dual pilgrimage program between the two routes. I've walked parts of the Camino and can understand how much these two places have in common. 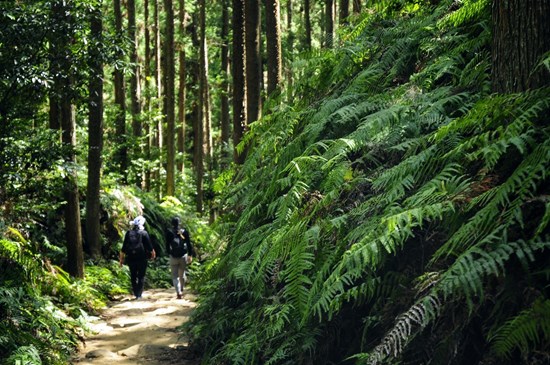 Ferns, cedars and silence on the Kumano Kodo. (Image: Jason A Jenkins)

As we walked, Alena told me the story of Yatagarasu, the mythical three-legged crow who guided great men through legendary landscapes. It was allegedly on these very paths of the Kumano Kodo where Yatagarasu guided the Emperor Jimmu in the 6th century BC. The symbol of a three-legged crow is still prominent today, most notably as the mascot of the Japanese national soccer team. Yatagarasu is also prevalent at the Three Grand Shrines of Kumano, his image integrated into talismans, banners and other spiritual imagery. 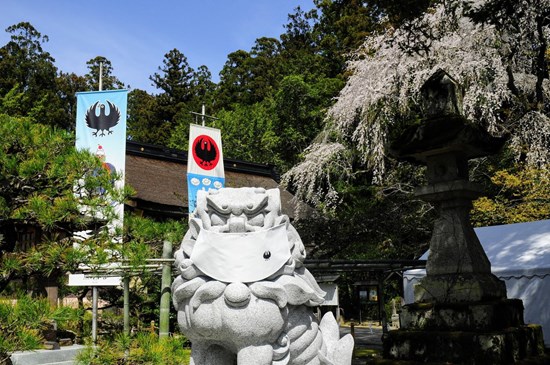 Yatagarasu, the mythical 3-legged crow, can be seen throughout the Kumano region. (Image Jason A Jenkins)

We ended our hike with lunch at Kumanoco Shokudo, tucking into venison donburi and fried cutlets of inoshishi (wild boar). A locally brewed Voyager beer was a nice compliment. Then it was off to my last stop of the trip: Akizuno Garten. Like cafes and restaurants we had visited earlier in Wakayama, Akizuno Garten retrofits cool new spaces into vintage architecture: in this case, a hotel, restaurant and comfortable, modern work spaces into an old wooden schoolhouse. Imagine all the charm of a traditional atmosphere, but renovated with stereo systems, stainless steel kitchens and, at least in the case of Akizuno Garten, mandarin-flavored ice cream dispensers. 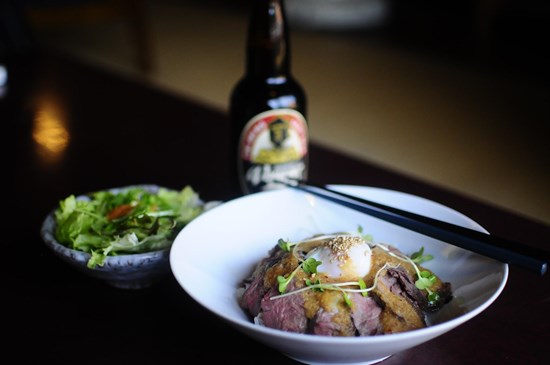 The Nanki-Shirahama Airport is minutes from the beach and less than 90 minutes from Tokyo's Haneda Airport. From the Kansai area, take the JR Kuroshio line from Shin-Osaka Station. The best way to explore the area is by rental car, but you can also manage by local buses as most destinations hug the coastline road. Or just base yourself in Shirahama. Most things close for the evenings and there are few restaurants or convenience stores in the area, so make sure to have your dinner arrangements sorted ahead of time. As I discovered, time seems to work differently here, but my Wakayama workcation gave me the stillness and calm I needed to return to the storm. 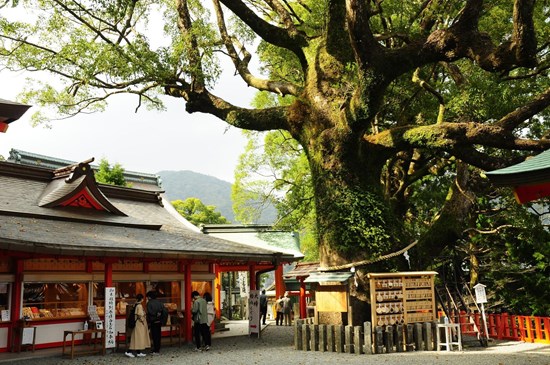 Make a wish at the sacred tree of Kumano Nachi Taisha. (Image: Jason A. Jenkins) 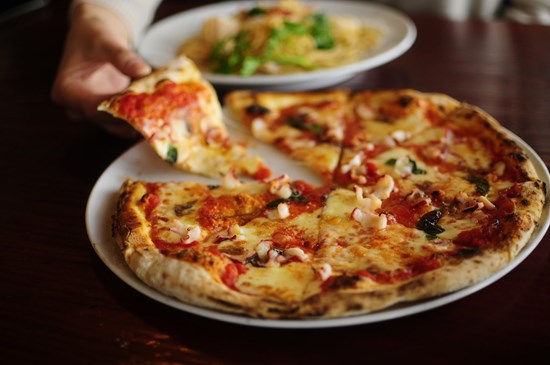 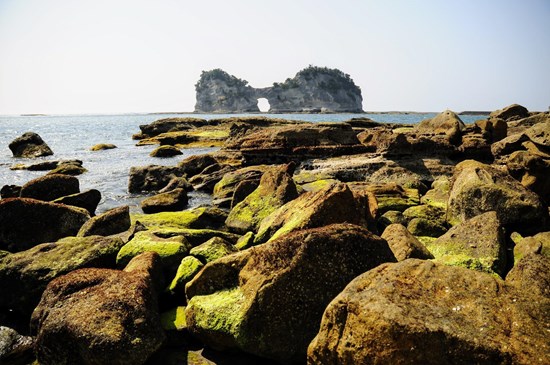 To view an eEngetsuto Island, one of many striking rock formations and a great place to watch the sun set. (Image: Jason A Jenkins) 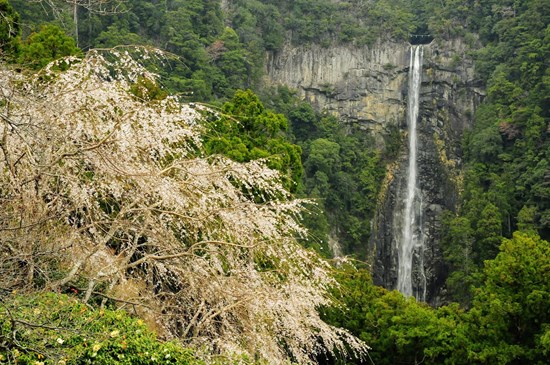 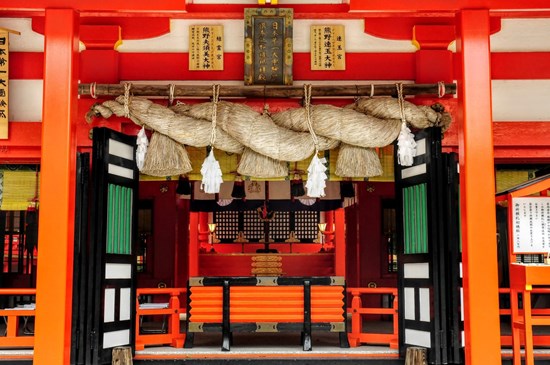 One of the main altars at Kumano Hatayama Taisha. (Image: Jason A Jenkins) 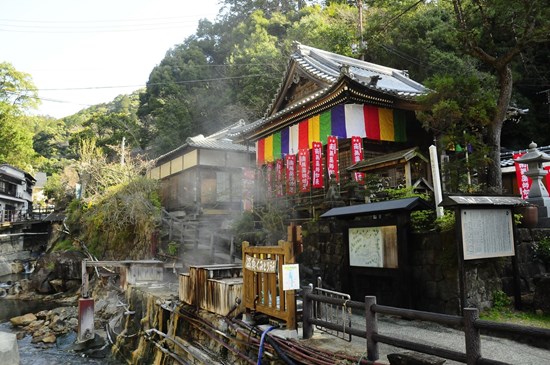 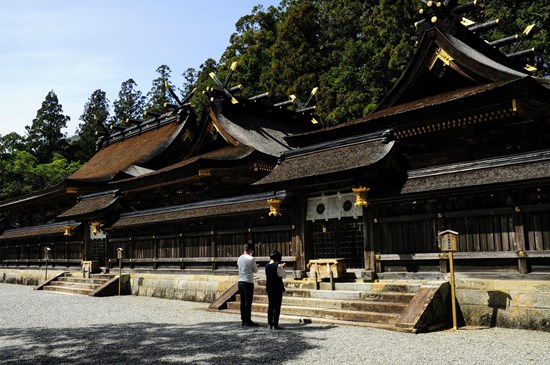 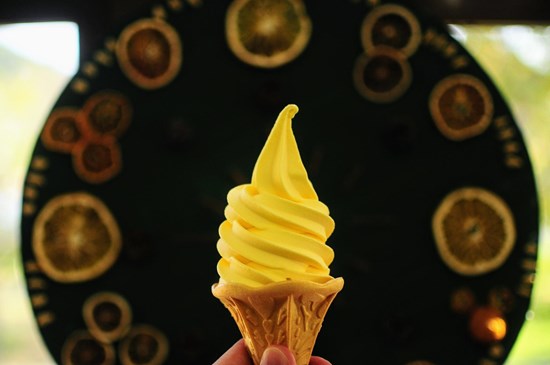 Find out more at https://en.visitwakayama.jp

To view the source version of this press release, please visit https://www.newsfilecorp.com/release/80147